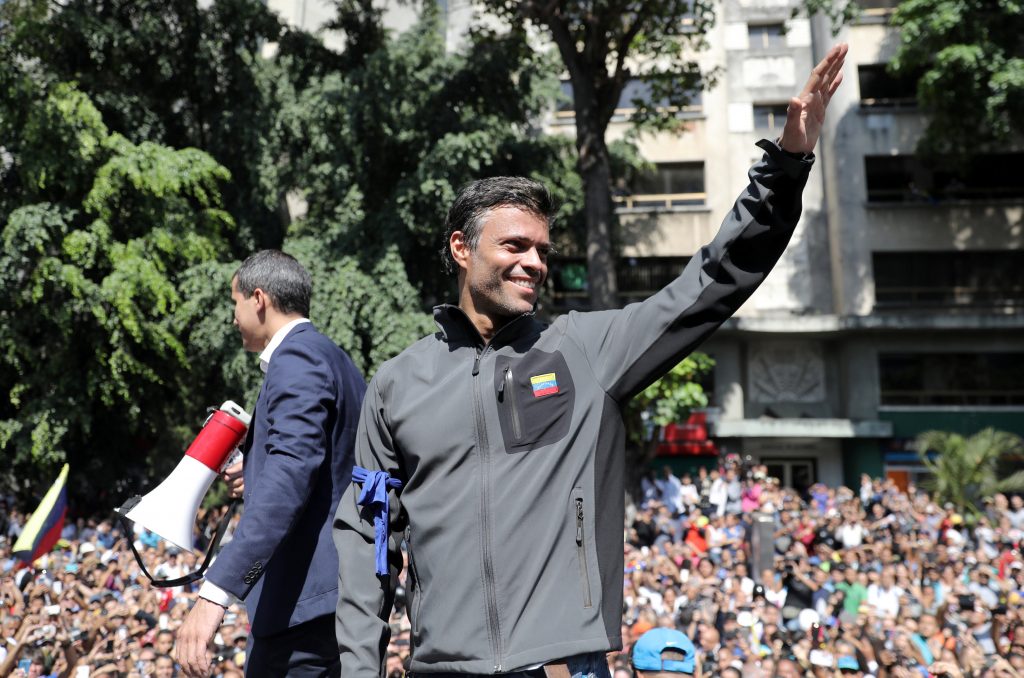 Venezuelans were expected to take to the streets on Wednesday for what opposition leader Juan Guaido pledged would be the “largest march” in the country’s history, a day after he called for the military to oust President Nicolas Maduro.

In his boldest effort yet to gain the support of the armed forces, Guaido appeared early Tuesday morning outside a Caracas air force base with dozens of National Guard members. That triggered a day of violent protests, leaving more than 100 injured but without any concrete signs of defection from the armed forces leadership.

“We know that Maduro does not have the backing or the respect of the armed forces,” Guaido said in a video message posted to his social media accounts on Tuesday evening. “We have seen that protest yields results. We should keep up the pressure.”

Whether the protest turnout meets those lofty hopes will provide a key test for Guaido, as some supporters grow frustrated that Maduro remains in office more than three months after Guaido – who leads the opposition-controlled National Assembly – invoked the constitution to assume an interim presidency, arguing Maduro’s May 2018 re-election was illegitimate.

While Guaido earned the backing of the United States and most Western countries, the armed forces have stood by Maduro, who retains the support of allies like Russia, China and Cuba. That has frustrated Guaido’s bid to assume the day-to-day functions of government on an interim basis – which he says would be a prelude to calling new elections.

Venezuelan living standards have declined even further in the first several months of the year, with a series of blackouts and water shortages adding to hyperinflation and chronic shortages of food and medicine that have prompted millions to emigrate.

Maduro, a socialist who calls Guaido a U.S. puppet seeking to orchestrate a coup against him, has also called on supporters to march on Wednesday.

“The first of May, we will have a large, millions-strong march of the working class,” Maduro said in a Tuesday night address. “We have been confronting different types of aggression and attempted coups never before seen in our history.”

Guaido’s choice of International Workers’ Day for a major march comes as he is making appeals to union leaders and public workers, a traditional base of support for Maduro and his predecessor and mentor, the late President Hugo Chavez.

“If he does get some degree of participation from labor movements, then that can be an additional feather in his cap,” said Risa Grais-Targow, the Latin America director at Eurasia Group in Washington, adding that the march would be “a significant barometer of his support and capacity to mobilize.”

In moments still memorialized in images on opposition banners and t-shirts, Lopez was arrested in 2014 after leading anti-government protests and pictured pumping his fist and stepping into a military vehicle with a Venezuelan flag in one hand and a white flower in the other.

A dozen protesters commented that Lopez’s return has given them new confidence in the plan proposed by the 35-year-old Guaido, who assumed an interim presidency in January and denounces Maduro as an usurper. But they also said the government could use his return to crack down.

While Guaido has replaced him as the most prominent figure in the opposition, Lopez still commands the protesters’ respect.

“When we saw him with Guaido, it filled you with hope, and you left with more strength than ever to end this as soon as possible,” said Eduardo, a 27-year-old demonstrator who declined to give his surname.

The government placed Lopez under house arrest in 2017, and since then he had not set foot outside his house in Caracas’ Chacao district, guarded by agents from the state intelligence service.

On Tuesday, Lopez appeared on an overpass by the La Carlota air base, joined by Guaido and several dozen soldiers who had disavowed Maduro. Lopez told a Reuters reporter there that intelligence agents had allowed him to leave his house.

“Good morning Venezuela,” Lopez told reporters on the overpass. “To all my brothers in the armed forces, now is the moment.”

After attending a series of rallies across Caracas, Lopez and his family first entered Chile’s diplomatic residence, then moved to the Spanish embassy, the Chilean foreign minister said.

Guaido and Lopez’s call on Tuesday for a military uprising marks the opposition’s boldest effort yet to persuade the armed forces to rise up against Maduro. But there were no concrete signs of defection from the armed forces leadership, and Maduro said he had the military’s loyalty.

The government has so far not commented on whether it would seek to re-arrest Lopez for breaking his house arrest.

Lopez was convicted of having incited protests against Maduro and sentenced to 14 years in prison. Diosdado Cabello, head of a pro-government legislative superbody called the constituent assembly, denounced Lopez as a “fascist murderer.”

Opposition leaders and critics around the world have slammed the case against him as a sham and described the trial as a mockery of justice.