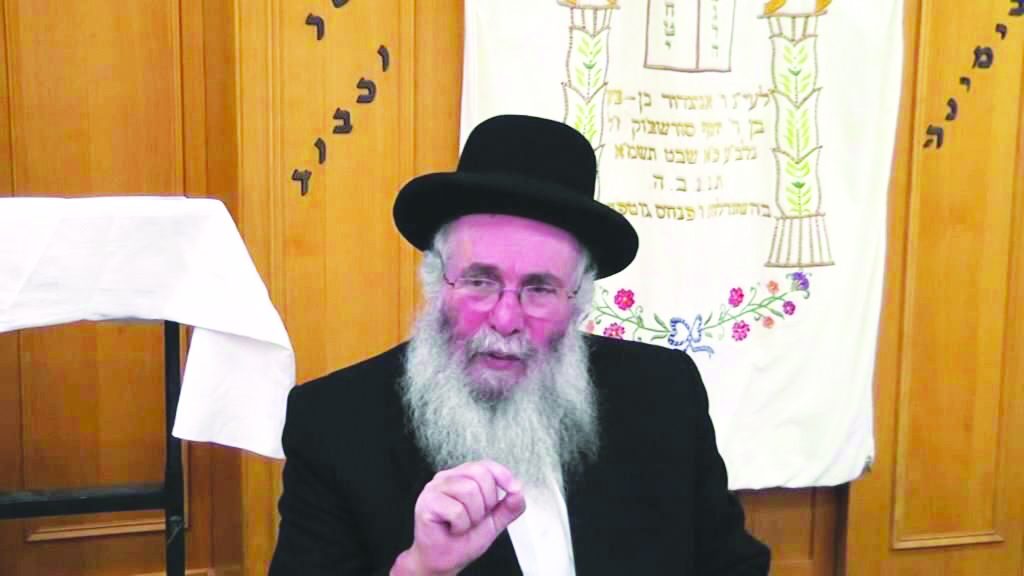 Until his last days, Rabbi Tauber relentlessly pursued his mission in life of spreading awareness about Hashem and His Torah to both the frum tzibbur and to secular Jewry through a host of avenues, while selflessly shunning the kavod that naturally came with it. A visionary in both spiritual and business pursuits, he was active in the plight of Russian Jewry when the Iron Curtain was still impenetrable and founded Monsey’s Ohr Somayach when the American teshuvah movement had barely begun. He headed Shalheves, an organization that held Torah seminar weekends for families around the globe and established Halachah Kollelim when the concept was unheard of.

His latest initiative, which would ultimately be the last beneficiary of his largesse in his lifetime when he pledged $100,000 on the day before his petirah, was V’Shinontam, an Israeli-based program that encourages the learning and reviewing of tens of blatt over bein hazmanim with accountability through small financial incentives.

He lectured around the globe and authored over 20 books on Torah hashkafah, all of which are replete with the teachings of the Maharal and Baal Hatanya, whose teachings he invested years into, and which shaped his hashkafas hachaim.

Rabbi Ezriel Tauber was born to Rabbi Ahron and Rosa (nee Gestetner) Tauber in Serdahel, Hungary, in 1938 just as World War II broke out. As a boy of just 6 years old when Hitler invaded Hungary, young Ezriel, together with his younger brothers and father, ran from bunker to bunker, always one step ahead of their Nazi tormentors. Through open miracles father and sons survived and returned to Serdahel, assuming their beloved wife and mother had been killed after being deported to Auschwitz.

They were mistaken. Mrs. Rosa Tauber had survived and was reunited with her family soon after liberation. The family left war-ravaged Europe for Eretz Yisrael via Belgium. As the eldest child, Ezriel was sent to London to learn at the side of his great-grandfather, Rabbi Shlomo Sofer, z”l — a direct descendant of the Ksav Sofer — who was spared the horrors of the Holocaust by fleeing Vienna for London at the onset of the War.

After a year in London, Ezriel joined his family in Eretz Yisrael, where he enrolled in the Pressburger Talmud Torah and subsequently the Dushinsky Yeshiva. In 1954, the Tauber family relocated to New York where Ezriel joined the Nitra Yeshiva in Mount Kisco headed by Harav Chaim Michoel Ber Weissmandl, zt”l, and Harav Yankel Orenstein, zt”l.

Rav Ezriel became a close talmid of Rav Weissmandl, whom he considered his primary Rebbe for the rest of his life. He spent many years learning and publicizing his sefer, Toras Chemed. Many of his later lectures to non-observant audiences were spent convincing them of the truth of Torah, illustrating how the horrors of the Holocaust were contained in the Torah Codes that Rav Weissmandl revealed in his works on the subject.

He personally imbibed Rav Orenstein’s oft-quoted message that a yeshivah student must be fluent in Shas, developing himself into a talmid chacham of stature. His unrelenting mission to spread Torah would eventually help others realize this dream when years later, he founded and subsidized V’Shinontam — an institute dedicated to testing Israeli yungeleit on hundreds of blatt after each bein hazmanim, rewarding them with modest financial stipends as they slowly gained mastery over Shas. This bein hazmanim alone, there are over 1,000,000 blatt being learned collectively and dozens of yungeleit are being tested on the entire Shas through the V’Shinontam program.

In 1957, Rav Ezriel married Sara Rivka Sable from Montreal, Canada, who stood by her husband as he embarked on one ambitious initiative after another to spread awareness about Hashem and His Torah. From Russia to Monsey and every locale in between, wherever Rav Ezriel went to spread Torah, his wife encouraged him to teach without cease, which he did until his passing this past Erev Pesach. The Skverer Rebbe, Harav Yaakov Yosef Twersky, zy”a, invited the young couple to settle in the recently established American shtetl of New Square, where they stayed until the Skverer Rebbe’s petirah, when they relocated to Monsey.

Rabbi Tauber could not be distracted in any manner from his lifelong quest of spreading Torah and Yiddishkeit to Jews, wherever they may be found, observant or otherwise, and in 1965, he undertook an extremely dangerous mission to the Soviet Union where he disseminated sifrei Torah, and other tashmishei kedushah while providing for the physical needs of Russian Jews, including kosher food and clothing, all under the noses of the KGB who were watching the Taubers’ every move.

The Tauber children remember their parents packing up suitcases with every item imaginable for those trapped behind the Iron Curtain. With the utmost secrecy, Rabbi Tauber arranged necessary documents and helped smuggle out Yidden yearning for freedom. After they reached the shores of America, Rabbi Tauber was there for them providing for their every need. Rabbi Tauber secured the release of the Ribnitzer Rebbe, zy”a, who upon immigrating to America stayed at the Tauber home.

Rabbi Tauber’s business pursuits included real estate and dealings in the precious stone industry. At meetings, at which Jewish — albeit secular — attorneys, engineers, real estate developers, and successful businessmen were present, Rabbi Tauber would implore them to learn more about their heritage. He would talk to them about what it meant to be a Jew, to live a life of meaning, to consecrate ourselves for G-d. He would give them books to take home and tell them about upcoming lectures.

He was fully active in being mekarev rechokim before “kiruv” became a household word. He became active in Yad L’Achim and other kiruv organizations in Israel, giving lectures on Torah hashkafah.

In 1978, Rabbi Tauber brought the concept of a kiruv yeshivah to America when, together with a group of lay leaders, he purchased land in Monsey to establish the American Ohr Somayach. Harav Yisroel Rokowsky, Rosh Yeshivah of Ohr Somayach, noted that despite founding and donating hundreds of thousands of dollars to the kiruv yeshivah, Rabbi Tauber shunned any kavod. “To think Rabbi Tauber — who was our founder — would even consider being honored at a yeshivah dinner was totally unrealistic!” noted Rabbi Rokowsky. In his selflessness not only did he not accept any recognition, but he did not use his position to impose his own views on the yeshivah’s hanhalah — he would not push for the admittance of a student if he had been rejected by the hanhalah.

Just as Rabbi Tauber’s mission was to spread Torah to unaffiliated Jews, he felt that within frum circles, he needed to spread those parts of Torah that were not being learned broadly. To that end, he started to put together the Machon L’Hora’ah — a kollel where Choshen Mishpat and Even HaEzer were studied by yungeleit, under a program with an emphasis on accountability. Although people may have agreed in theory to the plan, many openly suggested he was dreaming. Indeed, Rabbi Tauber was dreaming — but he had a way of turning his dream into a reality and with the enthusiastic support of Harav Yaakov Kamenetsky, zt”l, Rabbi Tauber opened the kollel with 10 yungeleit. Not only was his dream actualized in America, but four years later he partnered with Harav Yaakov Moshe Hillel, shlita, to open Yeshivat Chevrat Ahavat Shalom, in which Israeli avreichim master all four chelakim of Shulchan Aruch.

In 1985, Rabbi Tauber partnered with the venerated Rosh Yeshivah and beloved Rav of Ofakim, Harav Shimshon Pincus, zt”l, to found Shalheves, an organization that sponsors seminars throughout the year, in which couples and families would spend an extended weekend listening to lectures and exploring the depth, relevance and beauty of the Torah and the high plateaus we can reach. For 20 years, the pair would alternate giving the lectures as they trotted around the globe from Johannesburg to Brazil, from Europe to Canada to Eretz Yisrael, illuminating and inspiring thousands of lives. A family member noted that ultimately, the duo who had accomplished so much together during their lives would have yahrtzeits within a day of each other. Rabbi Tauber, who had spread so much Torah and touched so many lives, was niftar this past Leil bedikas chametz. The levayah was at Machon L’Hora’ah in Monsey with kevurah in Kiryas Pupa.