World May Day Protesters Clash With Police in Turkey
World 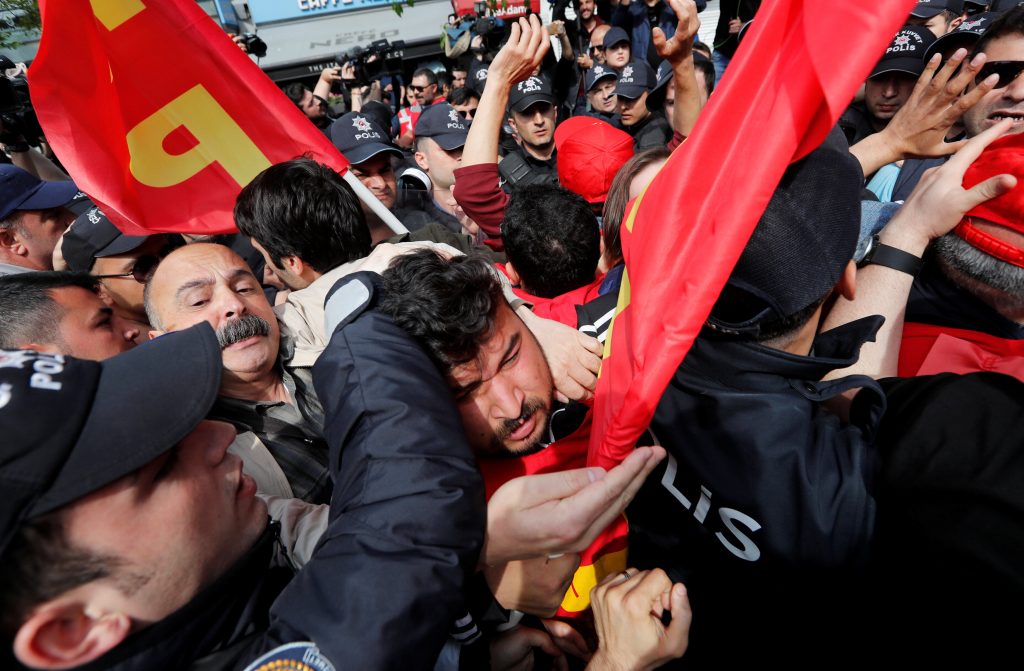 Thousands of trade union members and activists were marking May Day on Wednesday by marching through Asia’s capitals and demanding better working conditions and expanding labor rights.

Turkish police detained May Day demonstrators who tried to march toward Istanbul’s symbolic main square in defiance of a ban.

Turkey declared Taksim Square off-limits to May Day celebrations citing security concerns. Roads leading to the square were blocked Wednesday and police allowed only small groups of labor union representatives to lay wreaths at a monument.

Still, small groups chanting, “May Day is Taksim and it cannot be banned,” attempted to break the blockade. The official Anadolu news agency said more than two dozen were detained.

Trade unions and political parties will mark the day with rallies at government-designated areas in Istanbul and the capital, Ankara.

Taksim holds symbolic value for Turkey’s labor movement. In 1977, 34 people were killed there during a May Day event when shots were fired into the crowd from a nearby building.

A major South Korean umbrella trade union also issued a joint statement with a North Korean workers’ organization calling for the Koreas to push ahead with engagement commitments made during a series of inter-Korean summits last year.

The statement claimed that many of the plans agreed to between the Koreas, including joint economic projects, have been held back by a lack of progress in nuclear negotiations between Washington and Pyongyang.

Protesters in Seoul rallied in streets near City Hall, marching under banners denouncing deteriorating working conditions and calling for equal treatment and pay for non-regular workers.

The Korean Confederation of Trade Unions, which organized the protests and issued the joint statement with the North Korean organization, said more than 27,000 demonstrators turned out for Wednesday’s marches in Seoul. May Day rallies were also held in other major South Korean cities, including Busan, Gwangju and Daejeon.

“A new caste system has taken hold as the discrimination of non-regular workers in wages and job status has caused extreme social divide,” KCTU chairman Kim Myeong-hwan said at the Seoul rally. “Small merchants, the poor, the disabled and every other member of the socially weak are living precariously in an unequal society that’s dominated by chaebol and offers only a punctured social safety net.”

May Day rallies were also being held in other parts of Asia, including the Philippines, Malaysia, Indonesia, Taiwan, Cambodia and Myanmar. Other parts of the world were set to have rallies as well.

In Sri Lanka, major political parties called off traditional May Day rallies due to security concerns following the bombings that killed 253 people and were claimed by terrorists linked to the Islamic State.

French authorities announced tight security measures for May Day demonstrations, with the interior minister saying there was a risk that “radical activists” could join anti-government yellow vest protesters and union workers in the streets of Paris and across the country. More than 7,400 police will be deployed, aided by drones to give them an overview of the protests and a quicker way to head off potential violence.

In Bangladesh, hundreds of garment workers and members of labor organizations rallied in Dhaka, the capital, to demand better working conditions and higher wages.

Nazma Akter, president of one of Bangladesh’s largest unions, said female garment workers were also demanding six months of maternity leave and protection against abuse and violence in the workplace.

Bangladesh has thousands of garment factories employing millions of workers, and the industry generates around $30 billion in exports a year.

The Hong Kong Confederation of Trade Unions, which organized the march, is demanding a maximum standard workweek of 44 hours and an hourly minimum wage of at least 54.7 Hong Kong dollars ($7). Construction workers called for legislation to ensure work safety, while freelance workers are seeking basic labor protections such as the right to recover unpaid wages.

Thousands of low-paid workers took to the streets in Indonesia to demand higher wages, better benefits and improved working conditions in Southeast Asia’s largest economy. Laborers in Jakarta, the capital, gathered at national monuments and other places, shouting their demands.

“We demand the rights of workers and their families,” said Joko Harianto, head of the national trade union. “People think things are good, but actually these rights are very difficult to obtain.”

In Taiwan, several thousand workers were marching through the streets of Taipei, the capital, to demand better working conditions. They carried banners and flags and chanted for more days off and higher overtime pay. Taiwan’s official Central News Agency said 6,000 people joined the march.

In the Philippines, thousands of workers and labor activists marched near the Malacanang presidential palace in Manila. They demanded that the government of President Rodrigo Duterte address labor issues including a minimum wage increase and the end of contractualization for many workers.

Police said about 5,000 people joined the march, which comes just over a week before senatorial elections are held in the country. One labor group said its members would not vote for any candidate endorsed by Duterte, and burned an effigy of Duterte.

Ahead of a May Day rally in over a dozen German cities, Germany’s biggest trade unions are urging voters to participate in this month’s European elections and reject nationalism and right-wing populism.

The DGB, a confederation of unions with almost 6 million members, said Wednesday that the European Union has helped ensure peace on the continent for decades and brought significant benefits to millions, from paid holidays to maternity protection.

The unions called for ambitious EU-wide investments to boost employment and growth, saying “people must feel that the EU improves their lives in a lasting and tangible way.”

The unions warned that the political and economic turmoil in Britain following its vote to leave the European Union “shows what happens if those who stoke fear but have no plan for the future gain the upper hand.”