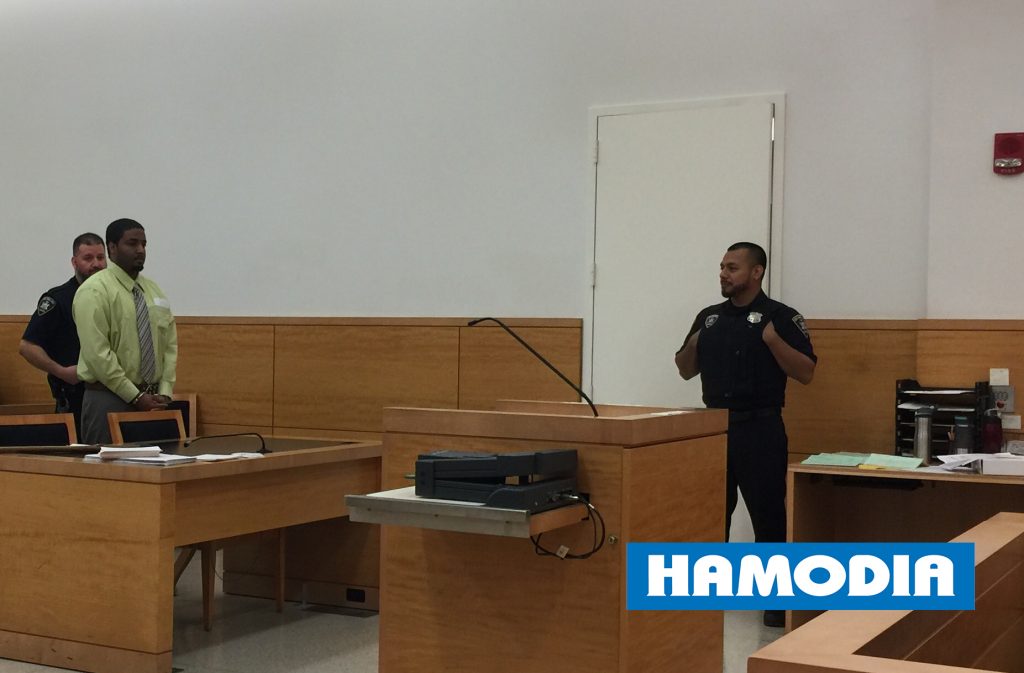 Kendel Felix, convicted of the murder and kidnapping of Menachem Stark, Hy”d, was sentenced Wednesday to the minimum 15 years to life in prison, after he cooperated with prosecutors in the trial of another defendant.

Prior to sentencing, Felix turned to face Menachem’s widow, Mrs. Bashie Stark, and the many Stark family members and friends in the courtroom, and cried as he read a letter to them.

“I sincerely apologize for allowing myself to be dragged into and participate in this act, not knowing the end result would have turned out to be the loss of Mr. Menachem Stark,” Felix read.

Describing his pain at having been locked up for five years already and being apart from his own children, Felix said that “what hurt me more is that someone lost their life and that I can’t bring him back.”

“Probably if I had not taken part [in the crime], Mr. Stark would be alive with you and his kids,” he said to Mrs. Stark. “I wish I could have turned back time so that none of this could have ever taken place … That is something I have to live with for the rest of my life.”

Felix said he has asked G-d to forgive him, and asked Mrs. Stark to “please forgive me for my participation.”

Many Stark family and friends were in tears as Felix read his letter to them.

Kendel and Erskin kidnapped Menachem outside his Williamsburg office on January 2, 2014, bound and gagged him, and forced him into the Felix family minivan. They drove to the home of Erskin’s brother Kendall Felix and picked him up, and then picked up another cousin, Irvine Henry. The plan went awry when the group suddenly realized that Menachem was no longer breathing; Erskin had unintentionally suffocated Menachem when he had kneeled on Menachem’s chest.

Erskin and Irvine left the vehicle and returned to the area of Menachem’s office – likely to retrieve a tracking device Erskin had placed under Menachem’s vehicle weeks earlier – but, fearing being seen, went home. Meanwhile, Kendall and Kendel drove the minivan with Menachem’s body to Long Island, where they put it in a dumpster and burned it.

Kendel, the only one who confessed to police, was the first conspirator arrested, less than three months after the murder. At his September 2016 trial, his attorney argued that the confession was coerced, but he was convicted of murder and kidnapping. The other three were arrested shortly thereafter, and Kendel then reached a deal to cooperate with prosecutors in the others’ cases.

Kendel testified in the recent trial of Erskin, painting the latter as the mastermind of the plot to kidnap Menachem. Erskin was convicted last month of murder and kidnapping.

In court Wednesday, prosecutor Howard Jackson said that the District Attorney’s Office had received “exemplary cooperation” from Kendel. “He has cooperated completely and fully; his attitude and behavior during the many times we have met in order to prepare him for his testimony has just been outstanding,” said Jackson, in asking New York state Supreme Court Justice Danny Chun to impose the minimum sentence of 15 years to life. Kendel had faced a maximum of 25 years to life.

In accepting the prosecution’s recommendation for the 15-to-life sentence, Chun said Kendel gave “truthful testimony, he was credible, he was sincere” and that it is “clear to me that this defendant is deeply remorseful for his own actions.”

As part of the agreement, prosecutors will send the parole board a letter noting Kendel’s cooperation, and not oppose his release at his first possible parole hearing in 10 years.

Chun said he hopes that Kendel “will have a chance to come out and lead a life that is productive and that he can rejoin his family at some point in the future.”

Kendel is in protective custody while serving his sentence, as there are fears for his safety after his cooperation in the case against Erskin.

“Kendel expressed obvious remorse for what he’s done, and it was clear that he was pulled into the crime and feels bad about it,” said Mrs. Stark. “Knowing the pain of children growing up without their father, I actually feel for him. I think the sentence is fair, that he should be reunited with his kids in 10 years.”

Irvine Henry previously pleaded guilty to hindering prosecution and attempted tampering with physical evidence. In exchange for Irvine’s testimony against Erskin, prosecutors agreed to drop the hindering charge and recommend that he be sentenced for the lower charge to no more than the three months he already sat in jail before posting bail. On Wednesday, Chun indeed sentenced Irvine to time served.

Irvine said in court only that he is sorry “for what happened to the Stark family,” according to people in the courtroom who spoke with Hamodia. Reporters were barred from the courtroom during Irvine’s sentencing, and Irvine has made court appearances under heavy police protection, as there are fears for his safety after his testimony against Erskin.

Kendall Felix accepted an offer from Chun in March to plead guilty to second-degree conspiracy and first-degree hindering prosecution, and was sentenced to 2-1/3 to seven years in prison. Prosecutors and the Stark family have objected, viewing the sentence as excessively lenient.

Erskin Felix was initially to have been sentenced Wednesday, but the sentencing was postponed due to a variety of health-related issues. Erskin, who had been weak from undergoing chemotherapy treatments for cancer, recently broke his leg, and was also exposed to measles. He will be sentenced next month, and faces a maximum of 25 years to life in prison.