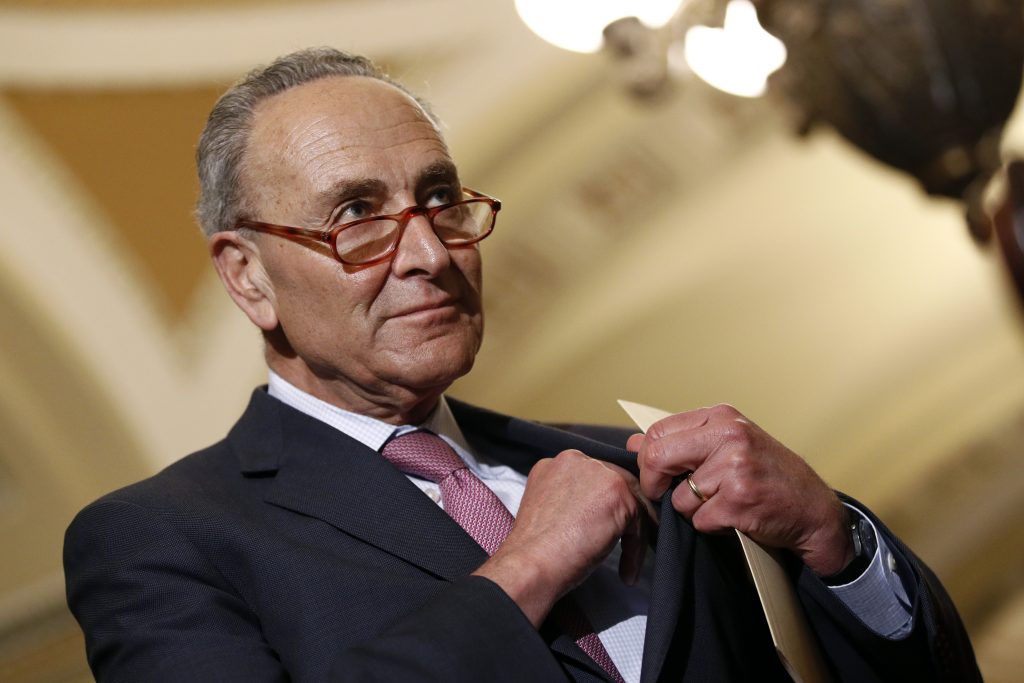 Senate Democrats are stinging from a trio of high-profile failures to recruit candidates who could help reclaim the majority, including Stacey Abrams’ announcement that she would pass up a U.S. Senate run in Georgia.

That decision, announced Tuesday, was a blow to Senate Minority Leader Chuck Schumer. After Abrams gained fame from her ultimately unsuccessful effort to become America’s first black female governor last year, Schumer personally — and publicly — urged her to consider challenging GOP Sen. David Perdue. In a particularly notable move, he tapped her earlier this year to deliver the Democratic response to President Donald Trump’s State of the Union address.

Also Tuesday, a spokeswoman for Democratic Rep. Cindy Axne said the freshman would seek re-election next year for her southeast Iowa House seat. The Democratic Senatorial Campaign Committee, Senate Democrats’ campaign organization, had tried persuading Axne to run for U.S. Senate against GOP incumbent Joni Ernst, who will be seeking a second term.

The inability of Schumer and other Democrats to corral well-known candidates underscores that many of the party’s biggest players are betting they’ll have better futures outside Capitol Hill, where action can be slow — especially in the minority. It’s also a sign of how tough Democrats will find their fight to regain control of the Senate next year, a steep climb that sparked glee from Republicans, who hold a 53-47 majority in the chamber.

“Today’s embarrassing recruitment failure is another devastating blow to Chuck Schumer’s dream of a Democratic Senate,” said Jack Pandol, communications director for the Senate Leadership Fund, a group linked to Senate Majority Leader Mitch McConnell and dedicated to boosting Republican candidates. “Now that top-tier Democrats in nearly every competitive state have all said no to Chuck Schumer, the picture is becoming clear: Democrats simply do not believe in Schumer’s ability to lead them into the majority.”

If a Democrat wins the White House next year, he or she will need a Senate majority to push through the ambitious agendas that have been pitched to voters. But to claw back power, Democrats will have to take at least three seats from the GOP.

Sens. Cory Gardner of Colorado, Susan Collins of Maine and Martha McSally of Arizona are widely considered among the most vulnerable Republican incumbents, and Democrats scored a recruiting coup when retired astronaut-turned-gun control advocate Mark Kelly launched a campaign against McSally.

But Gardner and Collins have both shown they can effectively wield the advantage of incumbency and are seeking to keep their distance from Trump as the president’s unpopularity becomes a political albatross in their states. And even if Senate Democrats defeat all three of their most obvious GOP targets in 2020, they will still struggle to help Sen. Doug Jones of Alabama hold onto a seat that no one expected him to win in that deep-red state two years ago.

That tricky math for Democrats would have proved easier to navigate with well-known candidates such as Abrams, O’Rourke and Hickenlooper forcing Republicans to play defense and spend money in more states to protect their incumbents. But top Democrats declared on Tuesday that they would have no trouble fielding successful candidates next year, particularly amid Trump’s persistently low approval ratings.

Sen. Catherine Cortez Masto of Nevada, who chairs Senate Democrats’ 2020 campaign arm, lauded the “phenomenal” quality of her party’s recruits and noted that “we have plenty of time” to lock in candidates.

“Just because we don’t get somebody that you’re aware of doesn’t mean we’re not going to find or have somebody that can beat those Republican incumbents in a state on the kitchen-table issues that matter to voters,” Cortez Masto told reporters.

Democrats point to three key factors in their worry-free approach to 2020’s Senate races: the still-early nature of the race, Trump’s unpopularity and the GOP’s own failure to avoid potentially messy primaries in Alabama and Kansas. Depending on the course of the Democratic presidential primary, in fact, O’Rourke, Hickenlooper and Bullock all could have time to reconsider their reluctance to run for Senate before deadlines pass to get on the ballot in their states.

As for Abrams, she remains a top-tier choice as a running mate for any Democratic presidential candidate and has yet to firmly state her own plans for the White House race. Schumer maintained that he’s not concerned about Georgia, where Trump’s polarizing record and Abrams’ close loss in last year’s gubernatorial race have left Democrats hopeful for an upset.

“We’re going to win in Georgia,” Schumer told reporters. “And we have lots of good candidates in many different states, including Georgia.”

But Sen. Todd Young of Indiana, who runs the Senate Republicans’ campaign arm for 2020, vowed to prove Schumer wrong.

“People are pretty happy with the direction, especially of our economy but more generally of our country, and I think that whomever David Perdue ultimately faces, he’s going to win on account of that,” Young told The Associated Press.