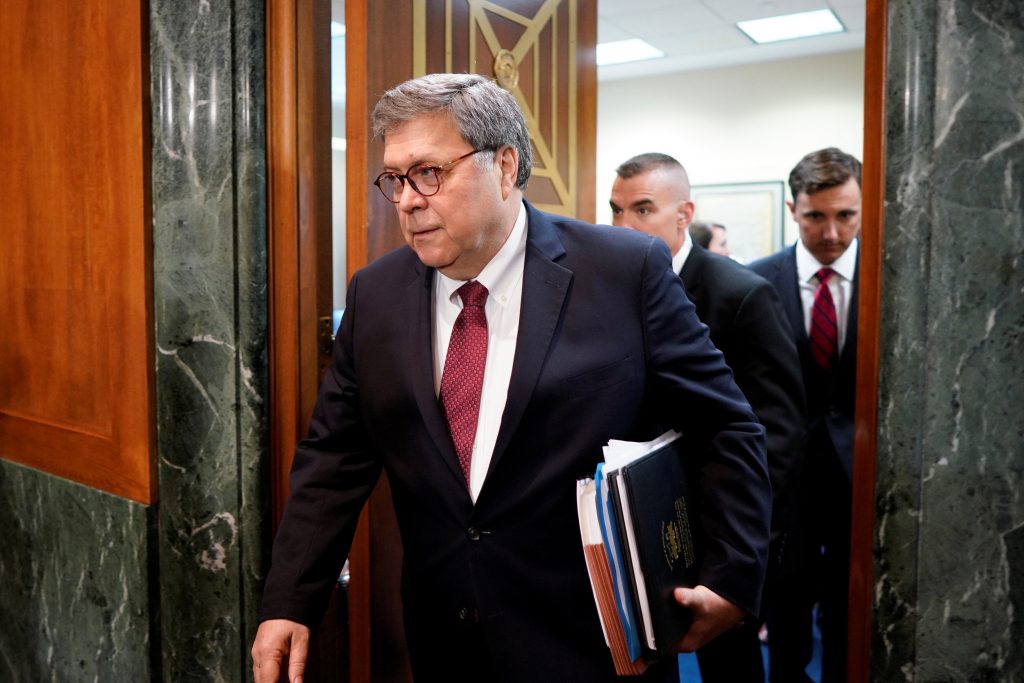 Under pressure from Democrats, Attorney General William Barr on Wednesday defended his decision to clear President Donald Trump of criminal obstruction of justice by attempting to impede Special Counsel Robert Mueller’s Russia inquiry and criticized Mueller for not reaching a conclusion of his own on the issue.

In his first congressional testimony since releasing a redacted version of the 448-page report on April 18, Barr also deflected complaints made by Mueller in a letter to him over how the attorney general had handled the disclosure of the special counsel’s conclusions.

During the sometimes testy hearing, Barr faced sharp questions from Senate Judiciary Committee Democrats on why he decided after receiving the document from Mueller in March to conclude that the president had not unlawfully sought to obstruct the 22-month investigation.

Democrats have accused Barr of trying to protect the Republican president. Barr defended the way he dealt with the report’s release, redactions made by the Justice Department removing parts of the document to protect sensitive information, and his ultimate conclusion that Trump did not obstruct justice.

At times, Barr appeared to excuse or rationalize Trump’s conduct regarding Mueller’s investigation, asserting that the president’s motives fell short of trying to derail the probe.

“You’ve chosen to be the president’s lawyer and side with him over the interests of the American people,” Democratic Senator Mazie Hirono told Barr, calling him a person who has sacrificed a “once-decent reputation for the grifter and liar that sits in the Oval Office.” Hirono called on Barr to resign.

It marked the first time a member of the Trump administration testified about the contents of Mueller’s report, which detailed extensive contacts between Trump’s campaign and Moscow and the campaign’s expectation that it would benefit from Russia’s actions. The report also detailed a series of actions Trump took to try to impede the investigation.

Mueller’s report concluded there was insufficient evidence to show a criminal conspiracy. Mueller opted not to make a conclusion on whether Trump committed obstruction of justice, but pointedly did not exonerate him. Barr has said he and Rod Rosenstein, the Justice Department’s No. 2 official, then determined based on Mueller’s findings that there was insufficient evidence to establish that Trump committed criminal obstruction.

Trump has been unfairly smeared, Barr said, by suspicions he had collaborated with Russia in the election. “Two years of his administration have been dominated by the allegations that have now been proven false. To listen to some of the rhetoric, you would think that the Mueller report had found the opposite,” Barr said.

Barr was asked about the report’s finding that in June 2017 Trump directed White House counsel Don McGahn to tell Rosenstein that Mueller had conflicts of interest and must be removed. McGahn did not carry out the order. Rosenstein had appointed Mueller the prior month.

Barr, named as attorney general by Trump after the president fired his predecessor Jeff Sessions, seemed to minimize the incident and said Trump believed “he never outright directed the firing of Mueller.”

“We did not think in this case that the government could show corrupt intent,” Barr said.

Barr told Senator Dianne Feinstein, the committee’s top Democrat, “There is a distinction between saying to someone, ‘Go fire him, go fire Mueller,’ and saying, ‘Have him removed based on conflict.’ … The difference between them is if you remove someone for a conflict of interest, then there would be — presumably — another person appointed.”

Feinstein, sounding unconvinced, responded, “Wouldn’t you have to have in this situation an identifiable conflict that makes sense, or else doesn’t it just become a fabrication?”

“I think the president’s intention was very clear. He wanted this to end,” Durbin said, referring to Mueller’s investigation.

It will be Trump’s decision, Barr said, whether McGahn will be allowed to testify before Congress on the matter.

Barr was also critical of Mueller for not reaching a conclusion himself on whether Trump obstructed the probe.

“I think that if he felt that he shouldn’t go down the path of making a traditional prosecutorial decision, then he shouldn’t have investigated,” Barr said.

Democrats asked Barr about a letter sent by Mueller to him in which the special counsel complained that Barr’s March 24 letter to lawmakers stating the inquiry’s main conclusions did not “fully capture the context, nature and substance of this Office’s work.”

Barr testified Mueller was unhappy with the way the conclusions were being characterized in the media, not his account of the conclusions. Barr also said Mueller had asked him to make public summaries of the report’s findings prepared by the special counsel’s team to give the public a fuller idea of the report’s contents, but the attorney general refused.

“The letter is a bit snitty and I think it was probably written by a member of his staff,” Barr said.

Democratic Senator Patrick Leahy said Barr misled Congress when he testified in April he did not know whether Mueller was happy with his initial characterization of his findings.

Democrats are debating whether the report serves as a suitable basis to begin impeachment proceedings in Congress to try to remove Trump from office. Democrats control the House of Representatives, which would start any such effort, while Trump’s fellow Republicans control the Senate, which would have to vote to remove the president.

Barr told the panel he believed Russia and other countries were still a threat to interfere in future U.S. elections.

Committee Republicans did not focus on Trump’s conduct but rather on what they saw as the FBI’s improper surveillance during the election of Trump aides they suspected of being Russian agents, as well as on the Kremlin’s election meddling.

To that end, Barr defended his accusation in a previous congressional hearing this month that American intelligence agencies engaged in “spying” on Trump campaign figures amid worries over their contacts with Russia.

He said “spying” is “a good English word” without a pejorative meaning and that he would not back off his language, which echoed Trump’s complaints that the Justice Department had engaged in wrongdoing toward his campaign.

Trump, ahead of the hearing, wrote a series of tweets.

“NO COLLUSION, NO OBSTRUCTION. Besides, how can you have Obstruction when not only was there No Collusion (by Trump), but the bad actions were done by the ‘other’ side?” the president wrote.

Barr indicated that to him, the matter was closed.

“The report is now in the hands of the American people,” he said. “We’re out of it. We have to stop using the criminal justice system as a political weapon.”

The Democratic-led House Judiciary Committee voted to adopt an aggressive questioning format for a hearing set for Thursday with Barr. A resolution allows committee lawyers to question Barr during an extra hour of proceedings, on top of a traditional hearing format that provides each lawmaker on the panel with five minutes for questions and remarks.

A congressional subpoena deadline for Barr’s department to hand over an unredacted copy of Mueller’s report expired on Wednesday. The House Judiciary Committee sought the full report and underlying evidence.