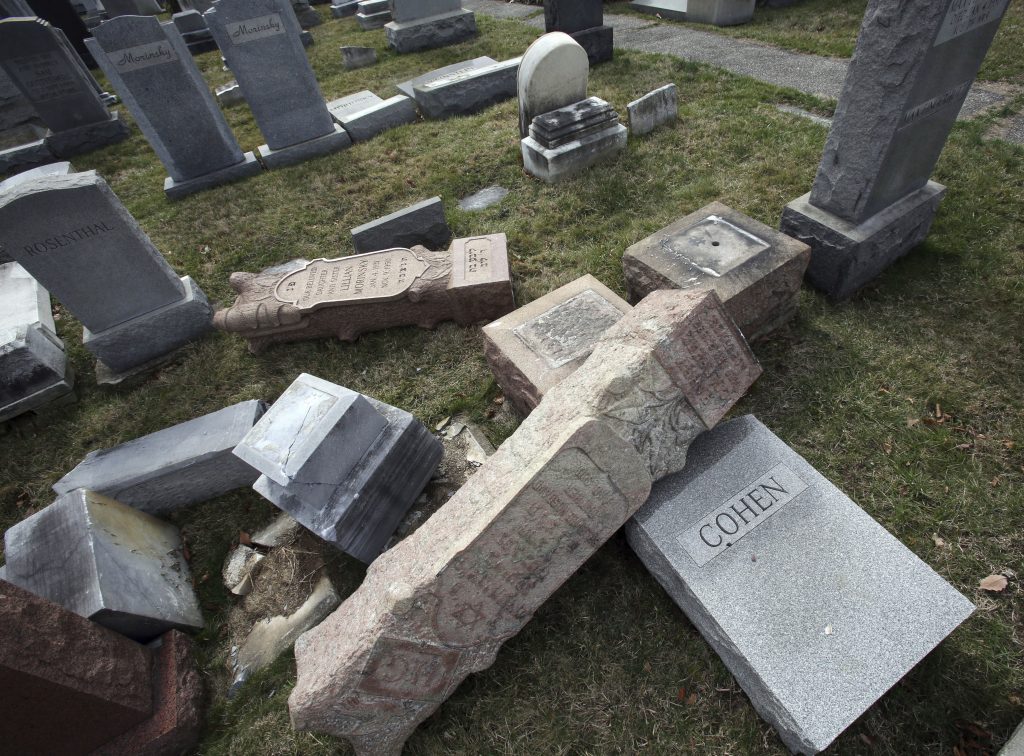 Violent attacks against the Jewish community in the United States doubled last year, while overall attacks that also include vandalism and harassment remained near record-high levels, the Anti-Defamation League reported Tuesday.

The Jewish civil rights group released its annual census of anti-Semitic incidents three days after a gunman opened fire at a Southern California synagogue, killing a woman and wounding a rabbi and two others.

The New York-based group counted 1,879 anti-Semitic incidents — either harassment, vandalism or physical assault — in 2018. That is a 5% decrease from the 1,986 incidents reported in 2017, but the third-highest total since ADL began tracking the data in the 1970s. The 2017 number marked a 57% increase over 2016 and was the highest tally ADL had counted in more than two decades.

ADL counted 39 cases of physical assaults involving 59 victims in 2018, up from 19 assaults and 21 victims in 2017. The 2018 tally includes the 11 people who were killed and two congregants wounded when a gunman opened fire at the Tree of Life Center in Pittsburgh in October. It was the deadliest attack on Jews in the nation’s history.

Israel Dahan, whose 8-year-old daughter and brother-in-law were both wounded in Saturday’s shooting at the Chabad of Poway synagogue near San Diego, said he doesn’t understand why there’s so much hate.

“We welcome everybody. We love everybody,” said Dahan, 32, who is originally from Israel. “I don’t even know why people like that (are) coming up against Judaism and against Jewish people.”

Jonathan Greenblatt, ADL’s CEO and national director, said he spent much of the weekend in California meeting and praying with the families of the shooting victims and other synagogue congregants. Greenblatt said it’s “hard to find much solace” in the new data.

“Unfortunately, the horrific tragedy in San Diego County reminds us that anti-Semitism is virulently strong,” he said.

In 2018, ADL counted 1,066 cases of harassment, defined as a situation in which a Jewish person or group of people “feel harassed by the perceived anti-Semitic words, spoken or written, or actions of another person or group.” Last year’s tally of harassment incidents was 5% higher than in 2017. The one category that experienced a decline was vandalism: The 774 incidents in 2018 represented a 19% drop from 2017.

ADL’s report says “known extremist groups or individuals inspired by extremist ideology” were responsible for 249 anti-Semitic incidents in 2018, accounting for 13% of the total.

“This is the highest level of anti-Semitic incidents with known connections to extremists or extremist groups since 2004, when at least 128 incidents were the result of leaflet distributions by white supremacist groups,” the report adds.

“We are only talking about real-world incidents in this report,” Greenblatt said.

But the deadly shootings at the Pittsburgh and California synagogues and the recent mosque attacks in New Zealand demonstrate “the role of online communities in radicalizing anti-Semites and bigots to violence,” said Oren Segal, director of the ADL’s Center on Extremism.

ADL last year counted 140 anti-Semitic incidents that referenced Israel or Zionism, including dozens of robocalls from a white supremacist who ran an unsuccessful campaign for a U.S. Senate seat in California.

The report says ADL includes “anti-Israel incidents” in its audit of anti-Semitic incidents “if they invoke or are accompanied by classic anti-Semitic stereotypes and tropes (such as Jews/Zionists control the government), if they target Jewish religious or cultural institutions or if they are expressed by groups or individuals who consistently express anti-Semitic ideas.”

“ADL is careful to not conflate general criticism of Israel or anti-Israel activism with anti-Semitism. However, Israel-related harassment of groups or individuals may be included when the harassment incorporates established anti-Jewish references, accusations and/or conspiracy theories,” the report adds.