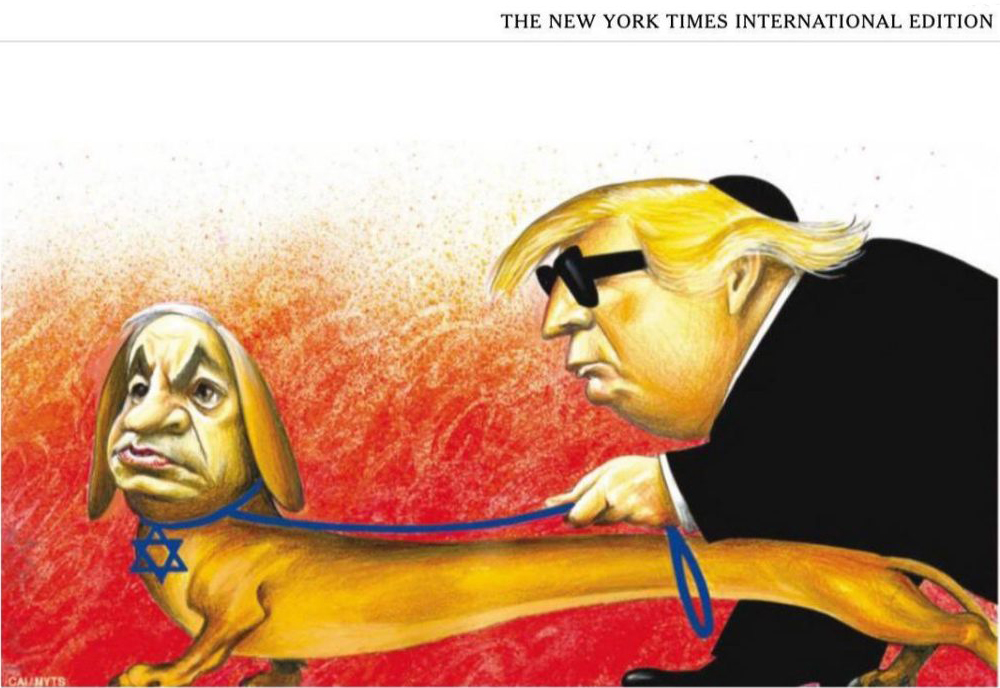 The image was of a dachshund, whose face was clearly drawn to resemble Israeli Prime Minister Binyamin Netanyahu, wearing a blue Star of David collar. Loosely holding the dachshund’s leash — and clearly being led by the animal-like figure, is the American President, Donald Trump, dressed in black attire, a black kippah perched on his head, and wearing sunglasses that are so dark that it can only symbolize blindness.

The cartoon, drawn by a controversial Portuguese artist named Antonio Antunes Moreira, was so egregious that it looked like something that appeared some eight decades ago in the Nazi publication Der Sturmer.

It actually appeared in last week’s international print edition of The New York Times, sparking outrage from across the political spectrum.

Finding itself at the receiving end of a torrent of condemnation, The Times first released a rather weak statement, saying that “The image was offensive, and it was an error of judgement to publish it,” and noting that “It was provided by The New York Times News Service and Syndicate, which has since deleted it.”

When the tone of the retraction attracted its own share of criticism, The Times apologized on Sunday.

“We are deeply sorry for the publication of an anti-Semitic political cartoon last Thursday in the print edition of The New York Times that circulated outside of the United States, and we are committed to making sure nothing like it ever happens again,” the newspaper claimed.

“Such imagery is always dangerous, and at a time when anti-Semitism is on the rise worldwide, it’s all the more unacceptable. We have investigated how this happened and learned that, because of a faulty process, a single editor working without adequate oversight downloaded the syndicated cartoon and made the decision to include it on the Opinion page. The matter remains under review, and we are evaluating our internal processes and training. We anticipate significant changes.”

In a strongly written op-ed, The New York Times’ own opinion columnist Bret Stephens wonders, “How have even the most blatant expressions of anti-Semitism become almost undetectable to editors who think it’s part of their job to stand up to bigotry?”

He answers, “The reason is the almost torrential criticism of Israel and the mainstreaming of anti-Zionism, including by this paper, which has become so common that people have been desensitized to its inherent bigotry.”

While in recent decades, The New York Times has rightfully earned a reputation of notoriety within the Jewish community for its extreme bias against Israel, its troubling relationship with the global Jewish community predates the founding of the State of Israel.

As the newspaper long referred to as “The Gray Lady” itself admitted in 1996, “The Times has long been criticized for grossly underplaying the Holocaust while it was taking place. Clippings from the paper show that the criticism is valid.”

As documented in the classic textbook Witness to History, The Times regularly either ignored reliable accounts of acts of genocide against the Jews of Europe or buried it deep inside its pages.

For instance, in mid-March of 1942, S. Bertrand Jacobson, the chief representative of the American Jewish Joint Distribution committee, returned to the United States after spending two years in Budapest, and held a press conference revealing first-hand information he had received from Hungarian soldiers about Nazi atrocities. Jacobson reported that 240,000 Ukrainian Jews had already been killed, and the killing spree was still in full effect. The Times relegated the account to page seven and omitted key details.

A few months later, the few surviving members of the Jewish Labor Bund in the Warsaw Ghetto testified about the death camp in Chelmno. Their account — one of the first about an extermination camp to reach the outside world — estimated that the Germans had by then “already killed seven hundred thousand Polish Jews.” The BBC broadcast a summary of its contents on June 2. It took nearly a full month for The Times to report on it, and when they finally did so on June 27, they gave only two inches of print space about the murder of 700,000 Jews — on page 5, as an afterthought to a story that begins with a story of a shooting of five people in Poland. Even when the paper finally published a more comprehensive story on the Bund report on July 2, the article appeared on page 6.

As the front page of The Times Sunday edition underscored, clarifications and apologies notwithstanding, little has changed at The Times.

The top photo, spanning five columns, and the accompanying story that took up four columns, was about whites buying houses in African American neighborhoods. At its right was a one-column story about aging prisoners in Guantanamo Bay.

The horrific shooting attack at the Chabad shul near San Diego, which the newspaper acknowledged local officials describing as a hate crime, was limited to a picture below the fold. The story itself appeared on page 24.

For the many Jews who long ago stopped reading The New York Times, this is hardly surprising. It is only the latest indication of something that has long been apparent to them.