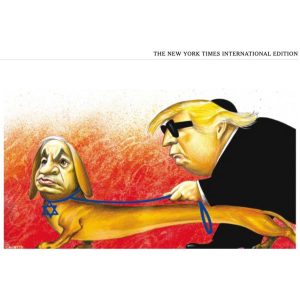 The New York Times was “deeply sorry” about the anti-Semitic cartoon it published late last week–but the cartoonist behind it is not.

Antonio Moreira Antunes, the Portuguese artist whose caricature of a blind, kippah-wearing Donald Trump being led by a dog with a Netanyahu face drew outraged reactions, claimed that he was merely being anti-Trump and anti-Netanyahu, not anti-Jewish.

“What will be the reason why I cannot do a critique of Israeli policy without being immediately categorized as anti-Semitic?” he wrote in an email to The Jerusalem Post on Tuesday. “I have nothing against the Jews but I have many things against the politics of Israel.”

Antunes said that “to help identify him [Netanyahu], little known in Portugal, I added the Star of David, symbol of the State of Israel and central element of its flag.” He didn’t explain why he drew a kippah on Trump.

He pointed out that in his work, he comments on injustice all over the world, not only in Israel. Neither his native Portugal nor a long list of other countries including Spain, France, Russia, Italy, Iran, China, Saudi Arabia, USA, Brazil, United Kingdom, and North Korea have been spared his poison pen.