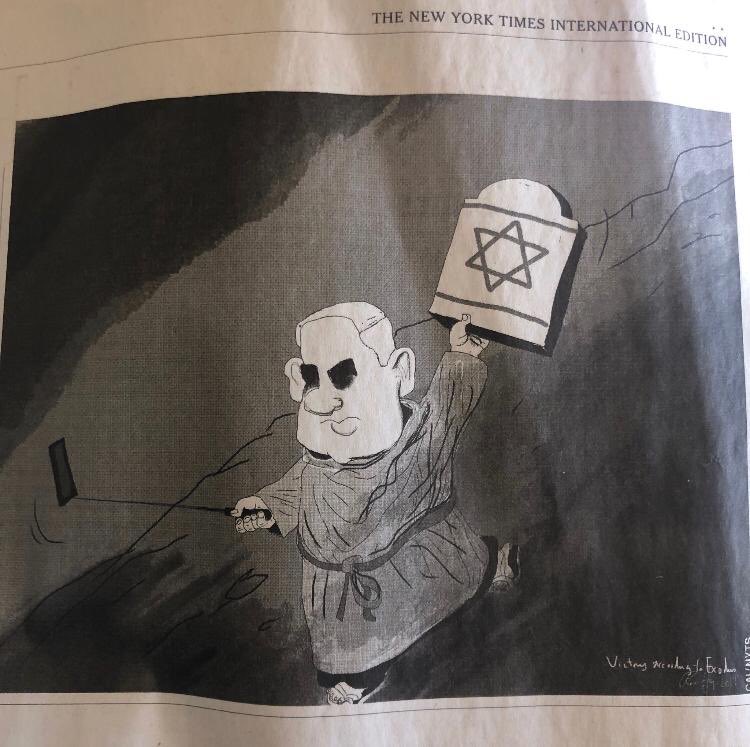 For the second time this week, The New York Times printed an offensive cartoon which depicted Israeli Prime Minister Benjamin Netanyahu in a negative manner.

The first cartoon depicted President Donald Trump as a blind man wearing darkened glasses being led by a dog with the face of Netanyahu and wearing a collar with a Magen David. The image was widely condemned, and The New York Times first issued an explanation which explained that it “was offensive, and it was an error in judgment to publish it.” Yet despite this partial admission, no apology accompanied the statement. After criticism by many, the paper issued another statement, this time stating they were “deeply sorry” for printing the cartoon.

The deep sorrow did not seem to run too deep, as a mere few hours later, The New York Times printed a second offensive cartoon. The cartoon by Norwegian cartoonist Roar Hagen depicts Israeli Prime Minister Benjamin Netanyahu with sinister looking eyes using a selfie-stick to take a picture of himself. He is descending a mountain in a desert carrying a tablet emblazoned with an Israeli flag painted on it. The cartoon implies that Netanyahu envisions himself as Moshe Rabbeinu delivering the luchos. The original cartoon depicted a figure meant to depict Moshe Rabbeinu, but it was sanitized a bit before being printed by The New York Times.

David Greenblatt, President Trump’s envoy for his peace plan in the Middle East, called it “insensitive, inappropriate and offensive,” repeated that the NYT “needs to educate its staff about antisemitism.”