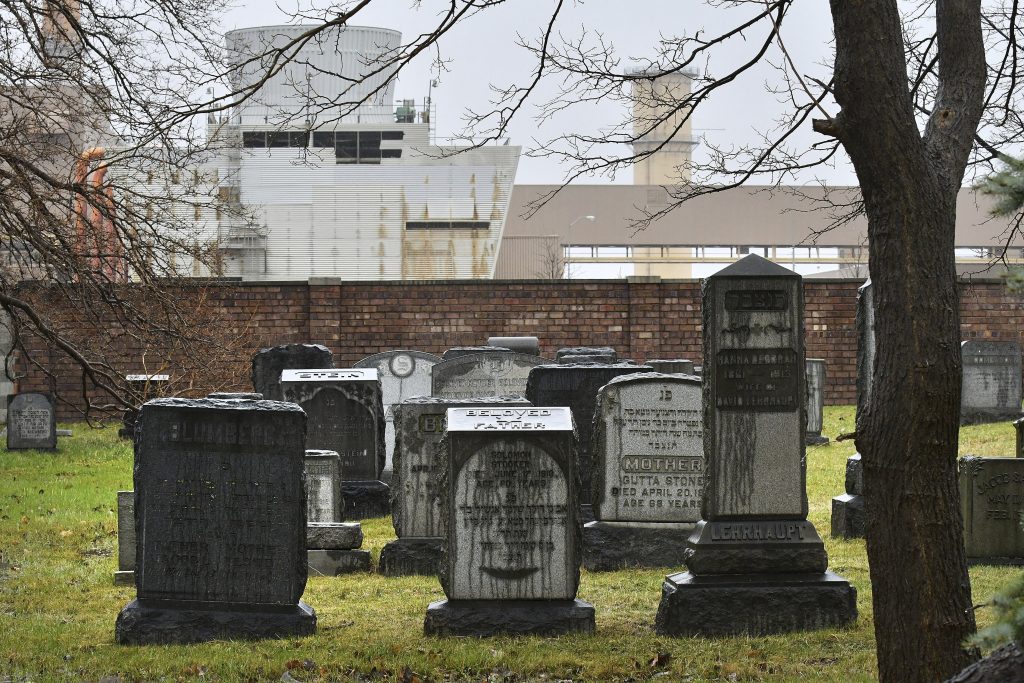 It was a family reunion for descendants of Meyer and Mollie Jacobs recently at an unlikely spot: General Motors Co.’s Detroit-Hamtramck Assembly Plant.

The four were among the two dozen visitors in the cold and rainy weather to walk through the gates of Beth Olem Cemetery on one of the two days in the year they are open. Walking into this green, walled site is like entering a whole other world.

Beth Olem is in the northwest corner of the Cadillac plant campus.

With the factory’s future cloudy, so is Metro Detroit’s oldest Jewish cemetery — again.

“We wanted to show this to the next generation,” said Joseph Roberts, 68, of West Bloomfield Township, the Jacobs’ great-grandson, after placing a rock on their grave as is custom in the Jewish tradition. “It’s important to pass this on because we die. We want them to know where it is. I don’t think (GM) would demolish it, but we don’t know what kind of access there will be.”

The cemetery is what remains of the Poletown neighborhood the city of Detroit demolished in the early 1980s through its powers of eminent domain. Named for its Polish heritage, the working-class community had been home to 4,200 residents, 1,500 homes, 144 businesses, 16 churches and a hospital. The city then sold the property to GM for the creation of the assembly plant.

Nearly 40 years later in November, GM announced the plant is one of five that will become idle as it shakes up its production line. The Detroit automaker will leave the plant without product in January when GM will end production of the Cadillac CT6 and Chevrolet Impala. Negotiations between GM and the United Automobile Workers union this summer will decide the plant’s ultimate fate.

“The cemetery is another one of those factors that are part of our concerns,” Hamtramck Mayor Karen Majewski said. “I don’t anticipate that whatever GM does with the property that anything will happen to the cemetery. There would be an outcry, as there should be.”

Kim Raznik, executive director of Birmingham’s Clover Hill Park Cemetery, which is owned by the conservative Jewish congregation Shaarey Zedek in Southfield that takes care of Beth Olem, said she heard the news of the plant’s closing from media reports. She spoke with security but has not had any formal conversations with GM about the cemetery.

The automaker said in a statement that an easement agreement with the congregation provides access to the cemetery: “GM will continue to honor its obligations under that agreement,” the company has said.

Approximately 1,400 graves were dug in nearly 100 years, with too few stones to mark them. Many graves that do have a marker are weather-worn, their lettering faded.

Armed with a clipboard and camera, Melanie Pohl of West Bloomfield Township visited the cemetery for the first time recently in hopes of finding some missing genealogical links. Online cemetery records database Find a Grave had 23 photo requests from relatives of people buried in Beth Olem for their headstones, she said.

“We found a few,” said Pohl, a 38-year-old administrative assistant for Temple Shir Shalom in West Bloomfield Township. “I don’t know what will happen when the plant closes. They could provide us more access; hopefully, it won’t be less.”

The plant, at least, has protected the graves mostly from vandalism, she said.

In 1862, a couple of members of Shaarey Zedek came by buggy and traveled beyond the edge of the city to buy the plot from German farmers, according to the Jewish Historical Society of Michigan.

They figured the site was so far away it would retain its countryside setting. But soon, two major railroads laid down tracks, bringing a number of new factories with them.

Beth Olem’s final body was buried in 1948. By then, other Jewish burial grounds in Metro Detroit had popped up, and many Jews living near downtown had moved northwest, largely passing over the area. In 1961, Shaarey Zedek moved from Detroit to Southfield.

So much time has passed since Beth Olem’s last burial that most visitors to the cemetery have no connection to the deceased. The cemetery typically attracts a few dozen visitors when it opens from 10 a.m. to 1 p.m on the Sundays before Passover and Rosh Hoshana. The Jewish Historical Society of Michigan occasionally offers tours.

“It’s part of our Detroit history,” said Jim Grey, a member of the Jewish Historical Society who provides the tours and has great-grandparents, an aunt and some distant cousins buried in Beth Olem. “These are names of the founding members of the Jewish community here. Some of their names are still around.”

The industrialization of Beth Olem’s neighborhood would not leave its sacred land to rest in peace. In 1910, the Dodge brothers built one of the largest plants in the world a few hundred yards from the cemetery. It became known as Dodge Main, and in 1966, Chrysler Corp. bought two adjacent blocks next to the cemetery for the plant’s parking lot. The new construction absorbed Smith Street, where people previously had access to Beth Olem.

To permit visitors, Chrysler built a 90-foot driveway from Clay Street on the next block and paid Shaarey Zedek $10,000, which it used for the cemetery’s maintenance.

The Dodge plant was demolished with much of the Poletown neighborhood for the GM plant, which opened in 1985.

Detroit Mayor Coleman Young supported the plans to bring manufacturing jobs to the city that was experiencing a shrinking population and tax base. A number of residents protested and sued. The Michigan Supreme Court said the city’s use of eminent domain for economic development was acceptable, a controversial decision it later overturned.

General Motors did bring up the idea of moving Beth Olem, said Andrew Phythian, who formerly supervised Beth Olem for Clover Hill and took part in the three-year negotiation between the Jewish community and GM in the early ’80s.

Moving a grave, however, is prohibited under Jewish law. Michigan law also makes it a bureaucratic challenge and an expensive process.

“The cost was quite prohibitive,” Phythian said. “GM was very accommodating. They chose to leave the cemetery. I’m glad they did. It’s a piece of Detroit history.”

Congregation Shaarey Zedek also had some leverage, though. It owned the perpetual easement from the cemetery to Jos. Campau that the land deed described as being the width of a two-horse carriage, Phythian said.

“Without the easement going up to Joseph Campau, the plant would not have been feasible,” he said. “The easement goes right through the plant.”

The automaker and congregation made a trade, he said. In exchange for the easement, GM would pay to repair the part of the cemetery wall that had been knocked out by a truck, for perpetual water and some other maintenance.

Since then, GM also has donated funds to commemorative events held at the cemetery. Most recently, it used some leftover paint to give the Beth Olem sign new life.

“We have no idea what’s going to happen,” said Marsha Greenberg-Hoffert, 71, of West Bloomfield Township, a great-great-granddaughter of the Jacobs. “It’s definitely worrisome.”