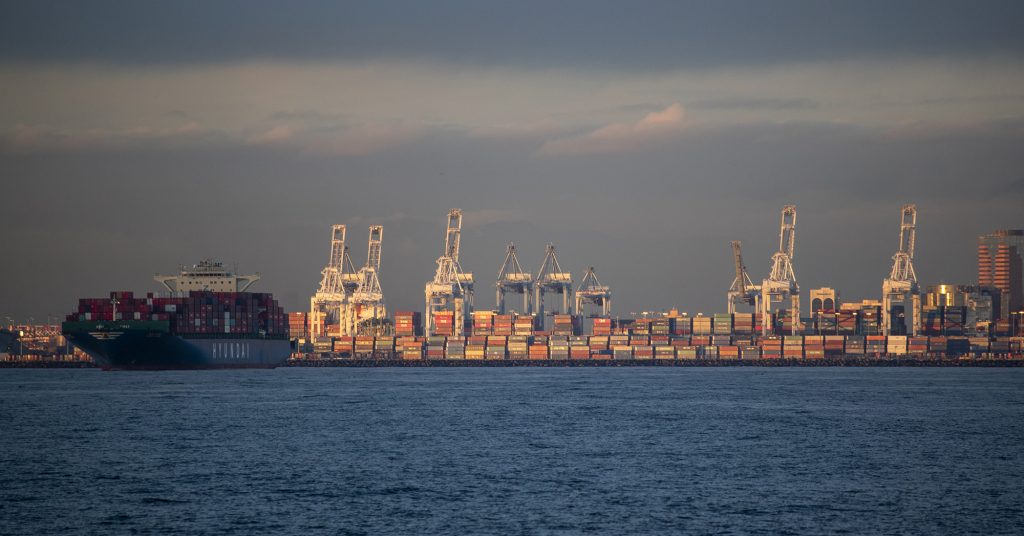 U.S. economic growth accelerated in the first quarter on a big boost from inventories and trade that offset slowdowns in consumer and business spending, with President Donald Trump touting the report as much stronger than expected.

Gross domestic product expanded at a 3.2 percent annualized rate in the January-March period, according to Commerce Department data Friday that topped all forecasts in a Bloomberg survey calling for 2.3 percent growth. That followed a 2.2 percent advance in the prior three months.

The numbers may bolster hopes that growth is stabilizing after its recent soft patch. President Trump, speaking with reporters before departing on a trip on Air Force One, said the GDP numbers were “far higher than the high expectations.”

The first acceleration in GDP since mid-2018 reflected the largest combined boost since 2013 for two typically volatile components — inventories and trade — that could weigh on the economy later in the year. While steady wage gains and the Fed’s forbearance on interest-rate hikes will help make the expansion the nation’s longest on record in July, the fading impact of tax cuts and a global slowdown mean President Donald Trump’s goal of sustained 3 percent growth will still be difficult to reach.

While 3.2 percent is a “great number,” consumer spending “has to get stronger for the economy to remain in an expansion,” said Michael Gapen, chief U.S. economist at Barclays Plc. “We think it will, but it’s not a silver lining. Underneath the hood, household spending was soft and further expansion is going to require households to get back to a normal pace of spending.”

The growth pickup mainly reflected a downturn in imports, greater state and local government spending, and rising inventories that were partially offset by slower consumer spending and fixed investment, the Commerce Department said in a statement Friday with the GDP data.

The pickup in growth came despite the federal government shutdown through most of January, which subtracted 0.3 percentage point from the quarterly growth pace on the reduction in services. Commerce said the closure also chopped the fourth quarter by 0.1 point, while adding that the full effects can’t be quantified.

Other recent reports have pointed to signs of strength, with March retail sales rebounding and a proxy for business investment rising sharply. U.S. stocks also rallied the most since 2009 in the first quarter and this month extended gains to a record, easing some concern about the durability of growth.

Fed policymakers this week are expected to hold interest rates steady while making adjustments to their characterization of the economy to reflect the firmer data.

At the same time, trade tension is fueling concern about the world economy, with the International Monetary Fund cutting its global growth outlook to the lowest since the financial crisis. Data last week showed world trade volumes falling the most since 2009 in the three months through February, while export-dependent South Korea saw its biggest GDP contraction in a decade.

Excluding government and the volatile trade and inventory components, final sales to private domestic purchasers cooled to a 1.3 percent pace that was the slowest since 2013. Economists monitor this measure for a better sense of underlying demand, especially in a period like the first quarter when rising inventories and a narrower trade deficit propped up GDP.

The report showed non-residential business investment rose 2.7 percent, reflecting the third straight decline in structures and a 0.2 percent advance for equipment spending that was the weakest since 2016.

Residential real estate was a drag on growth for the fifth straight quarter, contracting at a 2.8 percent annual pace and subtracting 0.11 percentage point from the pace of GDP gains, as housing starts and sales remained relatively sluggish. At the same time, the sector is starting to regain some steam amid lower mortgage rates and more-affordable properties.

Government spending, driven by state and local infrastructure building, reversed a decline in the prior period, growing at an annualized 2.4 percent pace that contributed 0.41 percentage point to the expansion, the most since 2017.

A further complication to interpreting the importance of the report is a statistical quirk known as residual seasonality, which has contributed to persistently lower GDP readings in the first quarters of recent years.

The government has attempted to remedy the phenomenon. The consumer spending slowdown primarily reflected slower purchases of goods, notably light trucks, Commerce said. The figures are less complete than a typical first GDP report: Delays from the government shutdown mean analysts didn’t have some consumer-spending data or merchandise-trade figures to factor into their estimates.