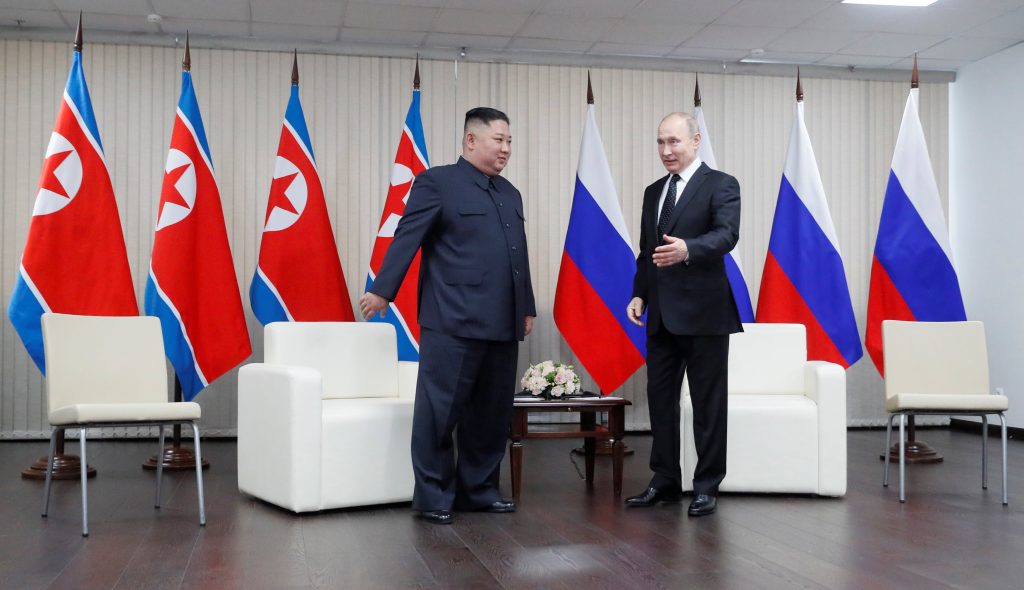 North Korean leader Kim Jong Un and Russian President Vladimir Putin met at a summit on Thursday intended to show Washington is not the only power with enough clout to engage with Pyongyang on its nuclear program.

The two men were holding a day of talks on an island off the Russian Pacific city of Vladivostok two months after Kim‘s summit with President Donald Trump ended in disagreement, cooling hopes of a breakthrough in the decades-old nuclear row.

The first session, comprising one-on-one talks with just a few aides present, lasted twice as long as the 50 minutes allocated in the schedule.

Speaking before the start of a second session, Putin said he and the North Korean leader had substantive discussions on issues including the nuclear standoff.

“We talked, of course, about the situation on the Korean peninsula, we exchanged views on how and what we can do so that there are good prospects for an improvement in the situation,” Putin said at the start of the second phase of talks, involving larger delegations from each side.

Kim, who had arrived in Vladivostok a day earlier on board his armored train, said the situation on the Korean peninsula “is an issue that the world is very interested in.”

Sitting opposite Putin and the rest of the Russian delegation, he said he had come to Russia to meet Putin personally and to exchange views on the nuclear standoff.

He said he wanted to “to discuss issues of strategic stability and joint management of the situation in the future, and to develop our traditional relations to meet the demands of a new century.”

With North Korea-U.S. talks stalled, the summit in Vladivostok provides Pyongyang with an opportunity to seek support from a new quarter, Russia, and possible relief from the sanctions hurting its economy.

For the Kremlin, the summit is a chance to show it is a global diplomatic player, despite efforts by the United States and other Western states to isolate it.

Russian officials have indicated they will come out in support of a resumption of the six-way talks on Pyongyang’s nuclear program, a long-standing format that had been sidelined by the Trump-Kim diplomatic push.

But with Moscow committed to upholding international sanctions until North Korea dismantles its nuclear program, analysts said the summit was unlikely to produce any tangible help for Pyongyang, beyond a show of camaraderie.

Putin has a track record of making world leaders wait for him, but the Russian leader arrived at the venue around half an hour before Kim showed up, according to a Reuters reporter at the scene.

Putin and Kim, in their first ever face-to-face encounter, smiled broadly and shook hands outside the summit venue, a university campus. They then stood side by side on an escalator, chatting with help from interpreters, as they made their way to an upper floor to begin their talks.

Putin’s last summit with a North Korean leader was in 2002 when his counterpart was Kim Jong Il, Kim Jong Un’s father and predecessor. Kim Jong Il also met in 2011 with Dmitry Medvedev, the Putin lieutenant who was then Russian president.

Thursday’s summit was taking place on the campus of the Far Eastern Federal University, a complex that back in 2012 played host to an Asia-Pacific Economic Cooperation summit.