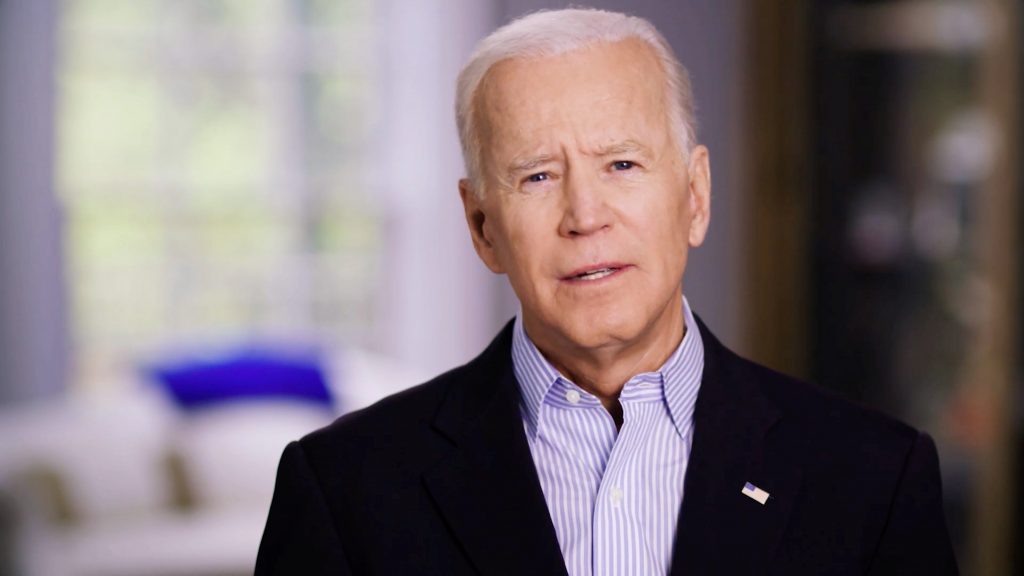 Former Vice President Joe Biden, a moderate who has made his appeal to working-class voters who deserted the Democrats in 2016 a key part of his political identity, launched a bid for the White House on Thursday as the party’s instant frontrunner.

Biden, who has been one of the party’s more aggressive critics of President Donald trump, announced the third presidential bid of his career by video, drawing a stark contrast between himself and Trump in a contest he said was a fight for the future of American democracy.

“We are in the battle for the soul of this nation,” he said. “I believe history will look back on four years of this president and all he embraces as an aberrant moment in time. But if we give Donald Trump eight years in the White House, he will forever and fundamentally alter the character of this nation, who we are, and I cannot stand by and let that happen.”

Trump responded in a post on Twitter, slamming Biden’s “intelligence” and vowing to meet him “at the Starting Gate” if the Democrat wins his party’s “nasty” nomination fight.

Biden, 76, had been wrestling for months over whether to run. His candidacy will face numerous questions, including whether he is too old and too centrist for a Democratic Party yearning for fresh faces and increasingly propelled by its more vocal liberal wing.

Biden starts as leader of the pack in opinion polls of a Democratic field of 20 contenders seeking a chance to challenge Trump, the likely Republican nominee, in November 2020.

Critics say his standing in polls is largely a function of name recognition for the former senator from Delaware, whose more than four decades in public service includes eight years as President Barack Obama’s No. 2 in the White House.

Obama’s spokeswoman, Katie Hill, said in a statement that Obama has long said selecting Biden to be his running mate in 2008 was one of the best decisions he ever made. The statement fell short of a formal endorsement, but said Obama relied on Biden’s insight, knowledge and judgment through both election campaigns and his entire presidency.

Biden will travel across the country in the coming weeks to detail his plans to rebuild the middle class, kicking off his tour with a visit on Monday to Pittsburgh, his campaign said.

On May 18, he will hold a rally in Philadelphia to “lay out his vision for unifying America with respected leadership on the world stage – and dignified leadership at home,” it said.

Pennsylvania, not far from Biden’s home state of Delaware, is a key battleground state and former industrial hub that backed Trump in 2016. The Republican president is seeking to capture the state again even as Democrats saw wins there in the 2018 midterm congressional election.

Democratic Senators Chris Coons of Delaware and Bob Casey of Pennsylvania threw their support behind Biden in statements early on Thursday.

In his announcement on Thursday, Biden held up the example of the August 2017 attack at a white nationalist rally in Charlottesville, Virginia, that killed a female counterprotester as a defining moment for the nation.

“It was there … we saw (Ku Klux) Klansmen and white supremacists and neo-Nazis come out in the open … bearing the fangs of racism,” Biden said, criticizing Trump’s remarks at the time that there were “very fine people on both sides.”

There was no moral equivalence between racists and those fighting such inequality, he said.

“In that moment, I knew the threat to this nation was unlike any I had ever seen in my lifetime,” said Biden.

Biden’s candidacy will offer early hints about whether Democrats are more interested in finding a centrist who can win over the white working-class voters who backed Trump in 2016, or someone who can fire up the party’s diverse progressive wing, such as Senators Kamala Harris of California, Bernie Sanders of Vermont, or Elizabeth Warren of Massachusetts.

Liberals have criticized Biden over his ties to the financial industry, which is prominent in his home state of Delaware, and for his authorship of a 1994 crime act that led to increased incarceration rates.

Known for his verbal gaffes on the campaign trail, Biden failed to gain traction with voters during his previous runs in 1988 and 2008.

He dropped his 1988 bid amid allegations he had plagiarized some of his stump oratory and early academic work. But his experience and strong debate performances in 2008 impressed Obama enough that he tapped Biden as his running mate.

Biden decided against a 2016 presidential bid after a lengthy public period of indecision following the death of his son Beau of brain cancer in May 2015. Beau had urged him to run.