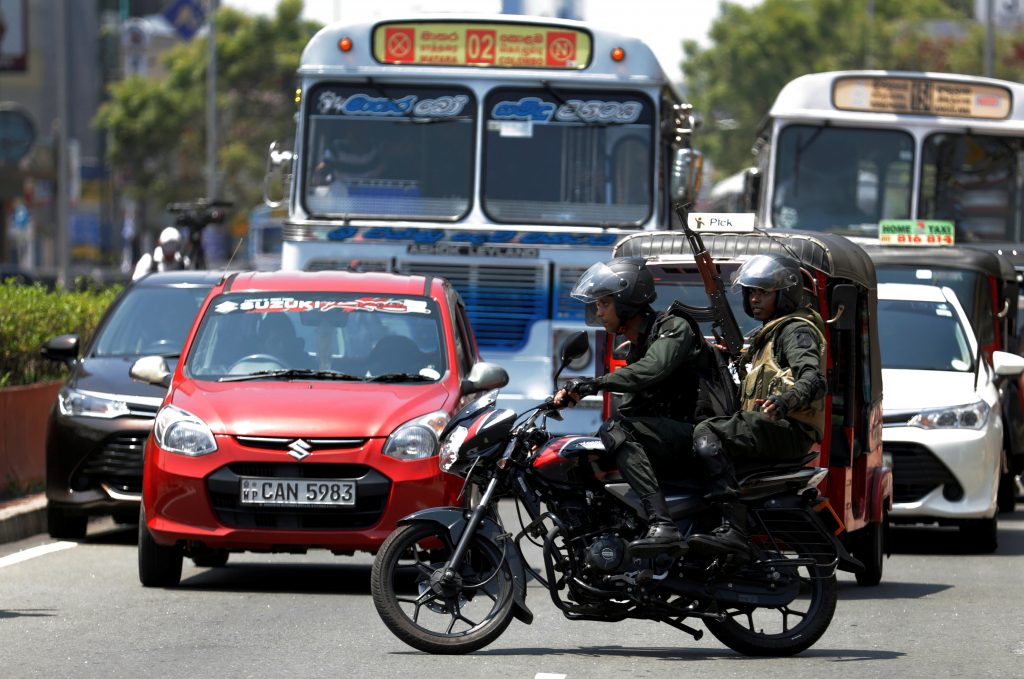 The scale and sophistication of the attacks on churches and hotels in Sri Lanka on Sunday suggested the involvement of an external group such as Islamic State, the U.S. ambassador to said on Wednesday as the death toll jumped to 359.

The Islamic State terror group claimed responsibility for the coordinated bomb attacks on churches and hotels but gave no evidence to support that.

Sri Lankan officials have blamed two domestic Islamist groups with suspected ties to Islamic State. Details have begun to emerge of a band of nine, well-educated suicide bombers, including one woman, from well-to-do families.

“If you look at the scale of the attacks, the level of coordination, the sophistication of them, it’s not implausible to think there are foreign linkages,” the U.S. ambassador to Sri Lanka, Alaina Teplitz, told reporters in Colombo.

“Exploring potential linkages is going to be part of (investigations),” she said.

Teplitz’s comments came as Sri Lanka‘s junior defense minister, Ruwan Wijewardene, conceded that there had been a significant intelligence failure before the attacks, with reports of warnings of strikes not acted on and feuds at the highest levels of government.

“It is a major lapse in the sharing of intelligence information,” Wijewardene told a separate news conference.

“We have to take responsibility.”

“Some top intelligence officials hid the intelligence information purposefully. Information was there, but the top brass security officials did not take appropriate actions,” Kiriella, who is also minister of public enterprise, told parliament.

He said information about possible suicide attacks was received from Indian intelligence on April 4 and a Security Council meeting was chaired by President Maithripala Sirisena three days later but it was not shared more widely.

Police earlier said the death toll had risen overnight to 359 from 321, making it the deadliest such attack in South Asian history. About 500 people were wounded.

If the Islamic State is confirmed, it would be the deadliest ever attack linked to the terrorist group.

Islamic State said through its AMAQ news agency on Tuesday the assaults were carried out by seven attackers.

However, Wijewardene said there were in fact nine suicide bombers involved in the attacks on three churches and four hotels. Eight had been identified and one of them was a woman, he said.

“Most of the bombers are well-educated, come from economically strong families. Some of them went abroad for studies,” Wijewardene said.

“One of them we know went to the U.K., then went to Australia for a law degree. Foreign partners, including the U.K., are helping us with those investigations,” he said.

Wijewardene told parliament on Tuesday two Sri Lankan Islamist groups – the National Thawheed Jama’ut and Jammiyathul Millathu Ibrahim – were responsible for the blasts. He said on Wednesday the leader of one of those groups blew himself up in the attack on the luxury Shangri-La Hotel in Colombo.

The attacks have already foreshadowed a shake-up of Sri Lankan security forces, with Sirisena saying on Tuesday he planned to change some of his defense chiefs after criticism that the intelligence warnings were ignored.

A total of 60 people had been detained for questioning across Colombo since Sunday, Wijewardene said. That total includes a Syrian, according to security sources.

An unspecified number of people were detained in western Sri Lanka, the scene of Muslim riots in 2014.

“Search operations are going on everywhere, there is tight checking of Muslim areas,” a security source said.