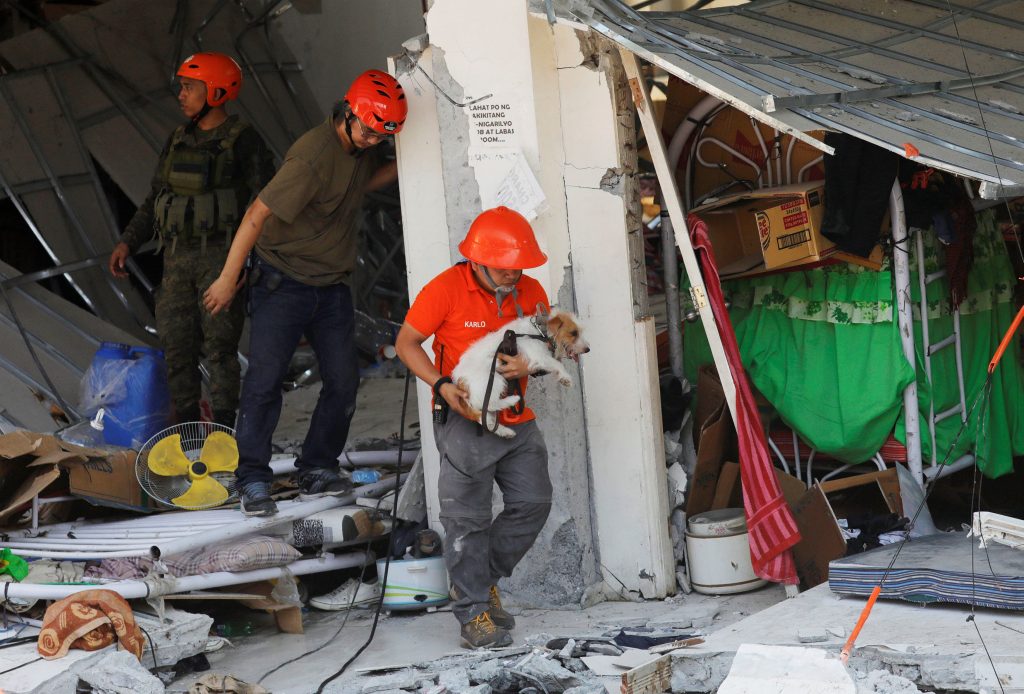 Rescue teams in the Philippines searched for signs of life beneath the rubble of a collapsed four-story commercial building on Tuesday after a strong earthquake shook the country’s biggest island, killing at least 15 people.

Heavy lifting equipment and search dogs were used as dozens of firefighters, military and civilian rescue teams raced to shift lumps of concrete in a commercial area of Porac, about 68 miles north of Manila, where a 6.1 magnitude earthquake damaged several buildings on Monday.

Two people were rescued there on Tuesday, adding to seven found alive and four found dead overnight in the mix of rubble and mangled metal that caved in on a ground-floor supermarket in the worst recorded incident.

Most deaths were confined to parts of Pampanga province, where the governor said investigations would be held to determine why only certain buildings were damaged while others were intact.

Porac mayor Condralito Dela Cruz said the earthquake was the most intense the town had ever experienced.

“We’re not sure how many people are trapped still,” he told the ANC news channel.

“We can still hear some voices, the voice of a woman,” he said.

The quake, which struck at 5 p.m. local time on Monday, was initially reported as a magnitude 6.3 but was later revised down to 6.1 by the U.S. Geological Survey (USGS).

Another, stronger earthquake with a magnitude of 6.5 struck in Samar in the southern Philippines on Tuesday afternoon, according to the USGS.

There were no immediate reports of destruction there but the national seismology agency said damage could be expected from what it recorded as a 6.2 magnitude quake.

The Philippines is prone to natural disasters and is located on the seismically active Pacific “Ring of Fire,” a horse shoe-shaped band of volcanoes and fault lines that arcs round the edge of the Pacific Ocean.

The earthquake was felt strongly in key business areas of Manila, with residential and office buildings evacuated after being shaken for several minutes. Train services were halted and roads and sidewalks were clogged by the sudden exodus of workers.

The government declared Tuesday a holiday for civil servants in Metro Manila to allow for safety inspections of buildings. Foreign exchange trading was suspended and a treasury bond auction cancelled.

The international airport in Clark, a former U.S. military base in Pampanga, remained closed for repairs.