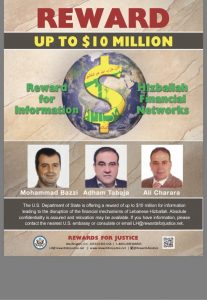 The United States on Monday offered a reward of up to $10 million for information that could help disrupt financing of Hezbollah, the armed Shi’ite group backed by Iran.

The announcement by the U.S. Department of State’s Rewards for Justice Program comes amid growing concerns by Washington about Hezbollah’s growing role in the Lebanese government.

Hezbollah’s regional clout has expanded as it sends fighters to Middle East conflicts, including the war in Syria, where it has fought in support of President Bashar al-Assad.