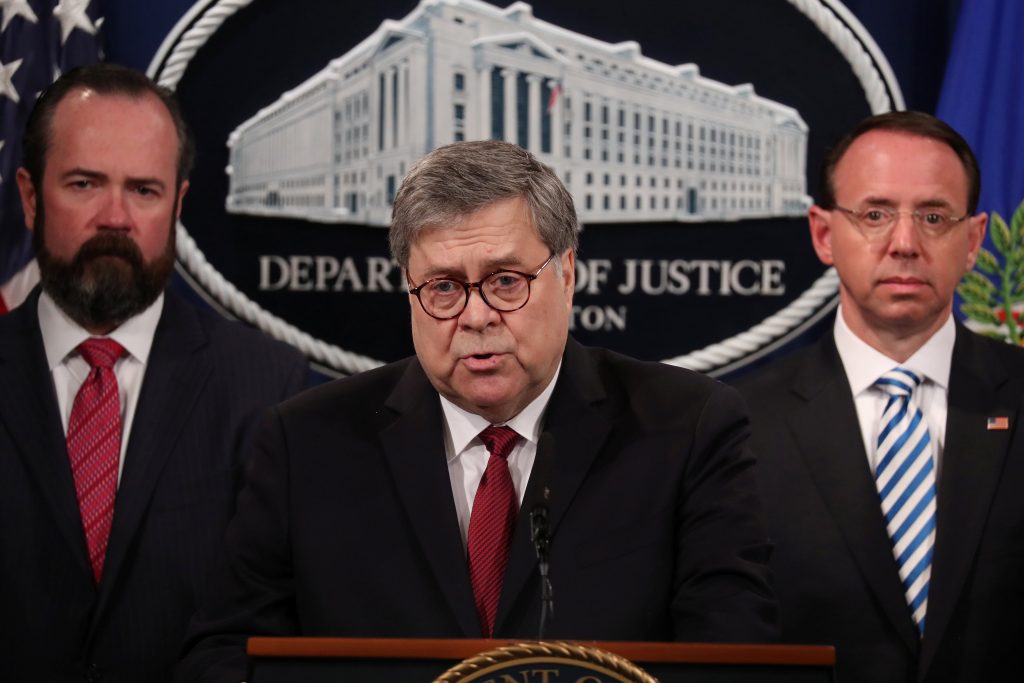 Special Counsel Robert Mueller’s report on his inquiry into Russia’s role in the 2016 U.S. election described in extensive and sometimes unflattering detail a series of actions by President Donald Trump to impede the probe, raising questions about whether he committed the crime of obstruction of justice.

Thursday’s release of the 448-page report after a 22-month investigation was a watershed moment in Trump’s tumultuous presidency and inflamed partisan passions ahead of his 2020 re-election bid in a deeply divided country.

Democrats said the report contained disturbing evidence of wrongdoing by Trump that could fuel congressional investigations, but there was no immediate indication they would try to remove him from office through impeachment.

Mueller built an extensive case indicating that Trump had committed obstruction of justice but stopped short of concluding he had committed a crime, though the special counsel did not exonerate the president. Mueller noted, however, that Congress has the power to address whether Trump violated the law.

“The conclusion that Congress may apply the obstruction laws to the President’s corrupt exercise of the powers of office accords with our constitutional system of checks and balances and the principle that no person is above the law,” the report stated.

Mueller, a former FBI director, also unearthed “numerous links” between the Russian government and Trump’s campaign, but concluded there was not enough evidence to establish that the campaign engaged in a criminal conspiracy with Moscow in its election meddling.

The report, with some portions blacked out to protect sensitive information, provided fresh details of how the Republican president tried to force Mueller’s ouster, directed members of his administration to publicly vouch for his innocence and dangled a pardon to a former aide to try to prevent him from cooperating with the special counsel.

The report noted that some Trump aides did not carry out some of Trump’s demands, including the one to fire Mueller.

The report stated that when former Attorney General Jeff Sessions told Trump in May 2017 that a special counsel was being appointed by the Justice Department to look into allegations that the Republican’s campaign colluded with Russia, Trump slumped back in his chair and said, “Oh my G-d. This is terrible. This is the end of my presidency….”

Trump appeared to be in a celebratory mood on Thursday, saying at a White House event with wounded U.S. troops that he was “having a good day” following the report’s release, adding, “It’s called no collusion, no obstruction.” Trump, whose legal team called the report “a total victory” for the president, has long described Mueller’s inquiry as a “witch hunt.”

After receiving a confidential copy of Mueller’s report in March, Attorney General William Barr made his own conclusion for the Justice Department that Trump had not committed obstruction of justice. But he told a news conference on Thursday that Mueller had detailed “10 episodes involving the president and discusses potential legal theories for connecting these actions to elements of an obstruction offense.”

Mueller’s report said that Trump was wary of FBI scrutiny of his campaign and him personally. “The evidence does indicate that a thorough FBI investigation would uncover facts about the campaign and the president personally that the president could have understood to be crimes or that would give rise to personal and political concerns,” the report stated.

Any impeachment effort would start in the Democratic-led House of Representatives, but Trump’s removal would require the support of the Republican-led Senate – an unlikely outcome. Many Democrats steered clear of threatening impeachment on Thursday.

The House, when it voted to impeach President Bill Clinton in 1998, included obstruction of justice as one of the charges. The Senate ultimately decided not to remove Clinton from office.

The Democratic chairman of the House Judiciary Committee, Jerrold Nadler, said he would issue subpoenas to obtain the unredacted Mueller report and asked Mueller to testify before the panel by May 23.

Nadler told reporters in New York that Mueller probably wrote the report with the intent of providing Congress a road map for future action, but the congressman said it was “too early” to talk about impeachment.

The inquiry laid bare what the special counsel and U.S. intelligence agencies have described as a Russian campaign of hacking and propaganda to sow discord in the United States, denigrate 2016 Democratic candidate Hillary Clinton and boost Trump, the Kremlin’s preferred candidate. Russia has denied election interference.

In analyzing whether Trump obstructed justice, Mueller looked at a series of actions by Trump, including his attempts to remove Mueller and limit the scope of his probe and efforts to prevent the public from knowing about a June 2016 meeting at Trump Tower in New York between senior campaign officials and Russians.

In June 2017, Trump directed White House counsel Don McGahn to tell the then-acting attorney general Rod Rosenstein that Mueller had conflicts of interest and must be removed, the report said. McGahn did not carry out the order.

McGahn was home on a Saturday in June 2017 when Trump called him at least twice. “You gotta do this. You gotta call Rod,” McGahn recalled the president as saying, according to the report.

It also said there was “substantial evidence” that Trump fired James Comey as FBI director in 2017 due to his “unwillingness to publicly state that the president was not personally under investigation.”

Mueller cited “some evidence” suggesting Trump knew about former national security adviser Michael Flynn’s controversial calls with the Russian ambassador to the United States before Trump took office, but evidence was “inconclusive” and could not be used to establish intent to obstruct.

Barr seemed to offer cover for Trump’s actions by saying the report acknowledges that “there is substantial evidence to show that the president was frustrated and angered by a sincere belief that the investigation was undermining his presidency, propelled by his political opponents, and fueled by illegal leaks.”

“President Trump faced an unprecedented situation. As he entered into office and sought to perform his responsibilities as president, federal agents and prosecutors were scrutinizing his conduct before and after taking office and the conduct of some of his associates,” Barr said.

Mueller’s team did not issue a subpoena to force Trump to give an interview to the special counsel because it would have created a “substantial delay” at a late stage in the investigation, the report said. Trump refused a sit-down interview with Mueller’s team and eventually provided only written answers.

The report said Mueller accepted the longstanding Justice Department view that a sitting president cannot be indicted on criminal charges, while still recognizing that a president can be criminally investigated.

Mueller said evidence he collected indicates that Trump intended to encourage his former campaign chairman, Paul Manafort, not to cooperate with the investigation and that the evidence supports the idea that Trump wanted Manafort to believe that he could receive a presidential pardon.

The report said the special counsel’s team determined there was a “reasonable argument” that the president’s son, Donald Trump Jr., violated campaign finance laws, but did not believe they could obtain a conviction.

The report also cited Trump’s repeated efforts to convince Sessions to resume oversight of the probe after he had recused himself because of his own prior contacts with Russia’s ambassador to the United States.

Barr, a Trump appointee, said he gave the president’s legal team an advance look at the report. Barr was blasted by Democrats for giving this “sneak peek” to the president’s team and for giving a news conference before the report was released trying to shape the narrative in favor of Trump.

“His press conference was a stunt, filled with political spin and propaganda,” Senator Kamala Harris, a 2020 Democratic presidential candidate, said on Twitter.