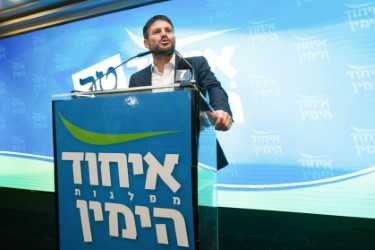 The officials were quoted as saying that the appointment of either Tourism Minister Yariv Levin or Union of Right-Wing Parties MK Betzalel Smotrich to head the ministry would be taken as “a declaration of war against the High Court.”

“These are two people who want to destroy the existing system and have said as such for several years,” the unnamed sources said.

“If in the past Prime Minister Netanyahu prevented legislative initiatives against the court and even promised presidents to stand by it, it seems that this time, if one of them is appointed, he will have a backing from Netanyahu to destroy the court and the justice system,” the sources reportedly said. “They see us as the enemy.”

The right-wing Levin and Smotrich have been among the sharpest critics of the Court in recent years. Both have supported legislation to curb the judiciary’s self-assumed power to strike down laws passed by the Knesset, arguing that the judges have encroached on its domain as an elected legislative body.

Smotrich has also come out in favor of passing a law to protect Netanyahu from indictment.

In an interview on Radio 103FM in Israel, Smotrich dismissed charges that either he or Levin are radicals out to destroy the judiciary.

“I prefer the Canadian model of revocation [of a High Court ruling against a Knesset law] by a normal majority of 61. Both Yariv and I are very central and balanced on this issue, not extremists. The justice system has emerged from its most extreme position in the last 30 years and we’re trying to balance it. We hope to succeed.”

Regarding immunity, Smotrich said: “I’ll return the immunity law we had until 2005 word for word. The significance is that if the Attorney General wants to file an indictment against any MK or minister, he’ll need to convince the Knesset to remove the immunity of someone who received the trust of the public only yesterday.”

When asked if such a law wouldn’t effectively enable politicians to avoid justice just because of their elective office, Smotrich parried:

“I’ll ask a similar question. Does it make sense that a serious criminal will escape the fear of judgment because the evidence of his wrongdoing was obtained by illegal eavesdropping?

“There’s an interest in honoring the democratic decision here also and it overrides the criminal process,” he added.

When accused of trying to create “a city of refuge in politics for criminals,” the candidate for justice minister replied: Totally not. It worked well until 2005. It will work after we amend the law as well.”