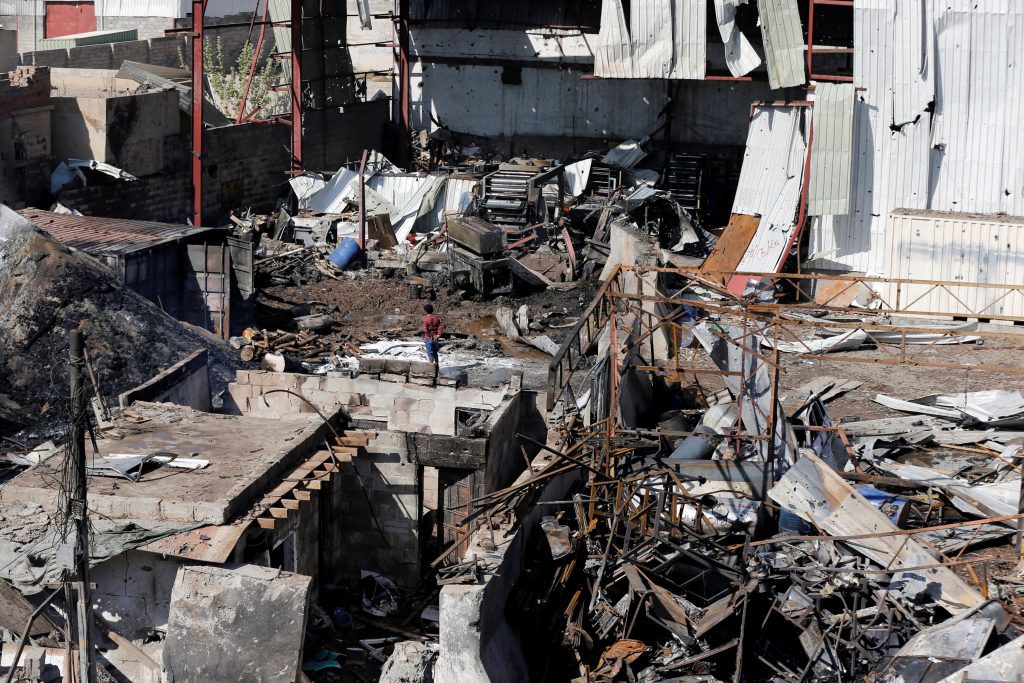 President Donald Trump on Tuesday vetoed a resolution that would have ended U.S. support for the Saudi-led military campaign in Yemen.

The move, which had been expected, marks the second veto of Trump’s presidency.

“This resolution is an unnecessary, dangerous attempt to weaken my constitutional authorities, endangering the lives of American citizens and brave service members, both today and in the future,” Trump said in a statement.

The measure had passed the House on a 247-to-175 vote this month and was approved by the Senate last month with the support of seven Republicans.

This month’s House vote marked the first time both chambers had acted to invoke the same war-powers resolution to end U.S. military engagement in a foreign conflict. It also represented the latest instance of Congress challenging Trump’s decisions as commander in chief.

The veto means the United States will continue its involvement in Saudi Arabia’s bombing campaign against Yemen’s Houthi rebels, waged in the name of holding back Iran’s expansion in the region.

But the Saudi-led effort, which has at times targeted civilian facilities and prevented aid shipments from getting to Yemenis, has been faulted by human rights organizations for exacerbating what the United Nations has deemed the world’s worst humanitarian catastrophe.

A senior administration official said that Trump was involved in drafting and editing the language of Tuesday’s veto statement and that he had told senators for some time he was going to issue a veto.

“It should come as a surprise to nobody,” the official said.

Trump viewed the Yemen vote as a rebuke of his administration after the killing of Saudi journalist Jamal Khashoggi and urged some senators not to go along with it, according to White House and congressional aides.

The CIA has concluded that Crown Prince Mohammed bin Salman, the country’s de facto ruler, ordered Khashoggi’s killing. Even so, Trump has resisted holding Mohammed responsible and has continued to embrace him and other Saudi leaders.

The president has grown frustrated with Congress for some of its votes that seemed designed to admonish him, such as the decision to remove sanctions on Russian oligarch Oleg Deripaska has ties to former Trump campaign chairman Paul Manafort, and the pushback against Trump’s declaration of a national emergency to secure funding for his long-promised U.S.–Mexico border wall.

Trump’s first veto, issued last month, was of a congressional resolution disapproving of his emergency declaration. Trump spent more time whipping votes against that measure than against the Yemen resolution, aides said.

The decision to keep support for the war in Yemen is perplexing to some members of the administration, considering the president is usually inclined to remove U.S. troops from all conflict zones.

In his State of the Union address in February, Trump declared, “Great nations do not fight endless wars.”

At the same time, Trump continues to want to keep strong ties with Saudi Arabia and does not share the view of Congress that the kingdom needs to be punished for the killing of Khashoggi, aides said.

In his statement announcing the veto, Trump defended the U.S. involvement, arguing that “it is our duty to protect the safety of the more than 80,000 Americans who reside in certain coalition countries that have been subject to Houthi attacks from Yemen.”

He also urged members of Congress to instead focus their energies on the drawdown of U.S. troops in Afghanistan and Syria.

“Congressional engagement in those endeavors would be far more productive than expending time and effort trying to enact this unnecessary and dangerous resolution that interferes with our foreign policy with respect to Yemen,” he said.

Sen. Tim Kaine, D-Va., who sits on the Senate Foreign Relations and Armed Services committees, responded Tuesday night that with his veto, Trump “shows the world he is determined to keep aiding a Saudi-backed war that has killed thousands of civilians and pushed millions more to the brink of starvation.”

“I hope my colleagues will show we won’t tolerate the Trump administration’s deference to Saudi Arabia at the expense of American security interests by voting to override this veto,” he said.