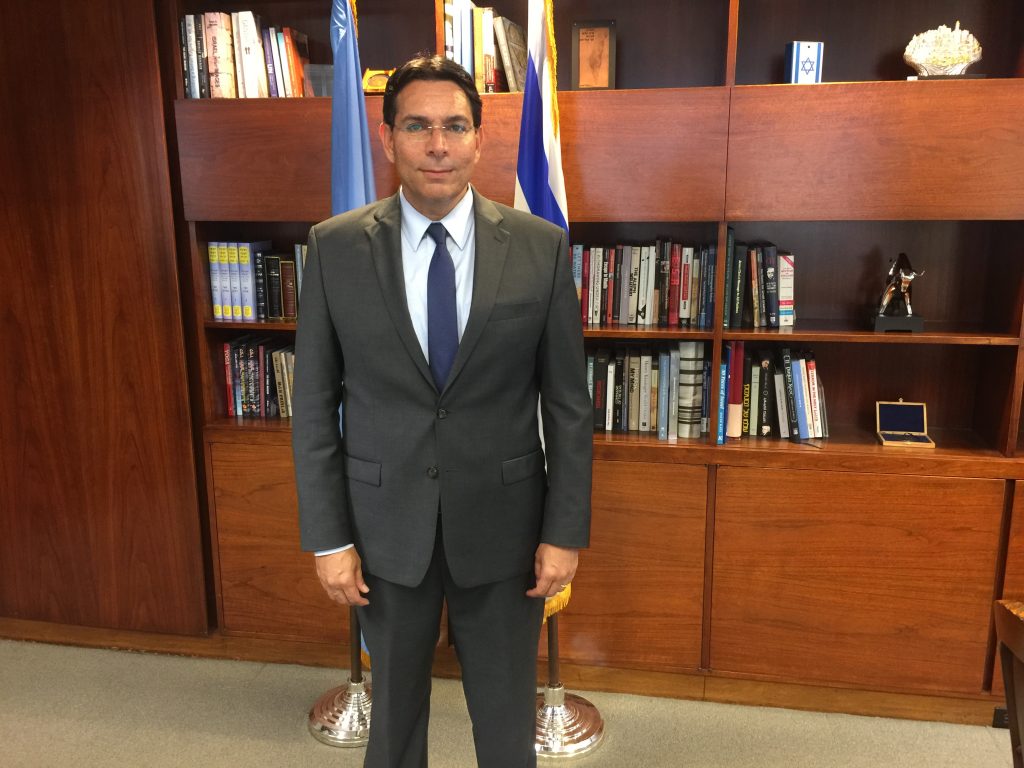 Israel is keeping an open mind toward the peace plan being crafted by the U.S., but Palestinians will not do the same, alleged Danny Danon, Israel’s ambassador to the U.N.

Speaking at a press briefing Wednesday, Danon said, “We will respect [the plan], we will look at it, we are willing to have a dialogue,” but noted that new Palestinian Prime Minister Mohammad Shtayyeh has said, in an interview with the Associated Press, that any American plan will be “born dead.”

“The Palestinians, for the last 71 years, they always said ‘no’ immediately. To everything,” going back to the U.N. Partition Plan.

“We’re going to celebrate our independence May 9. They could have celebrated their independence. But they chose to say no all the time, and we expect it will be the same.”

According to media reports published while Danon was speaking with journalists in his New York office Wednesday, Jared Kushner, senior adviser to President Donald Trump, told diplomats in Washington that the plan will be rolled out sometime after the Muslim month of Ramadan, which ends June 5.

Danon said that he hopes the proposal will be a “regional plan” involving a number of other Mideast countries to engage the sides and support the process, and will include economic-development initiatives. But the “most important thing,” he said, is that “at the end you will need to have direct dialogue” between Israel and the Palestinians.

“The plan can be the roadmap or the guideline, but at the end, you will need both sides entering the room, negotiating,” arguing that the U.S. and other international entities like the EU and U.N. can “try to support the process, bring sides together, but they cannot bypass the direct negotiations.”

According to Danon, the problem with the Palestinian leadership’s mindset is that “they try to get the outcome” before even beginning discussions.

“It’s legitimate to demand and to have expectations,” said Danon “but they want to get their expectations approved before the dialogue.”

Israel, on the other hand, is willing to view the plan and enter negotiations without preconditions.

“And we have a lot of things that bother us,” said the ambassador. “We don’t like the fact that they pay salaries to terrorists. We don’t like the incitements. We have a list of demands, but we don’t say, ‘Unless you promise us that in the end of the negotiations that will be the outcome, we are not entering the room.’ That’s what they are trying to do.’”

Though Prime Minister Binyamin Netanyahu made an election-eve promise to annex Jewish settlements in Yehudah and Shomron, Danon said Israel “will respect the efforts of the administration” and that no such action would be taken before the peace plan is released. In any event, he said, Israel recognizes that many Palestinians live in these areas and does not seek to annex those parts. But “sometimes we don’t hear the same recognition coming from the other side,” accepting that Jews live in Yehudah and Shomron as well.

Asked about the anti-Israel rhetoric from some Democratic congressional freshmen, Danon said, “For us, bipartisan support is very important. We value it, and we have friends from both parties, and we will continue to have it. But personally, I am disturbed when I see leaders use anti-Semitic language.” In response to Rep. Ilhan Omar’s charge of American Jews having dual loyalty, Danon said, “You can be a loyal American and at the same time support Israel.”

Just as right-wing Jews appreciated former President Barack Obama’s increase of security aid to Israel, Danon said that Democratic American Jews who are opposed to Trump should still embrace his pro-Israel moves. It is “important to put Israel above the domestic politics,” he argued, while recognizing that “it’s hard to expect when you have such a heated [domestic political] debate.”

Danon said he welcomes movements by American politicians of all stripes to “boycott the boycotters” of Israel – those participating in the BDS movement. Though he said Israel has not suffered economic harm from this movement – “because our products are so good, and they are needed” – he said the movement must be fought because “in terms of the image it’s problematic, and we should not allow it to become accepted to boycott Israel.”

Danon himself has been open about his intention to return to Israeli politics. Though he chose not to run in the just-completed election — “in Israel we have elections often,” he said Wednesday, “so we’ll wait for the next opportunity.” He did not rule out the possibility of joining the current government as a minister.