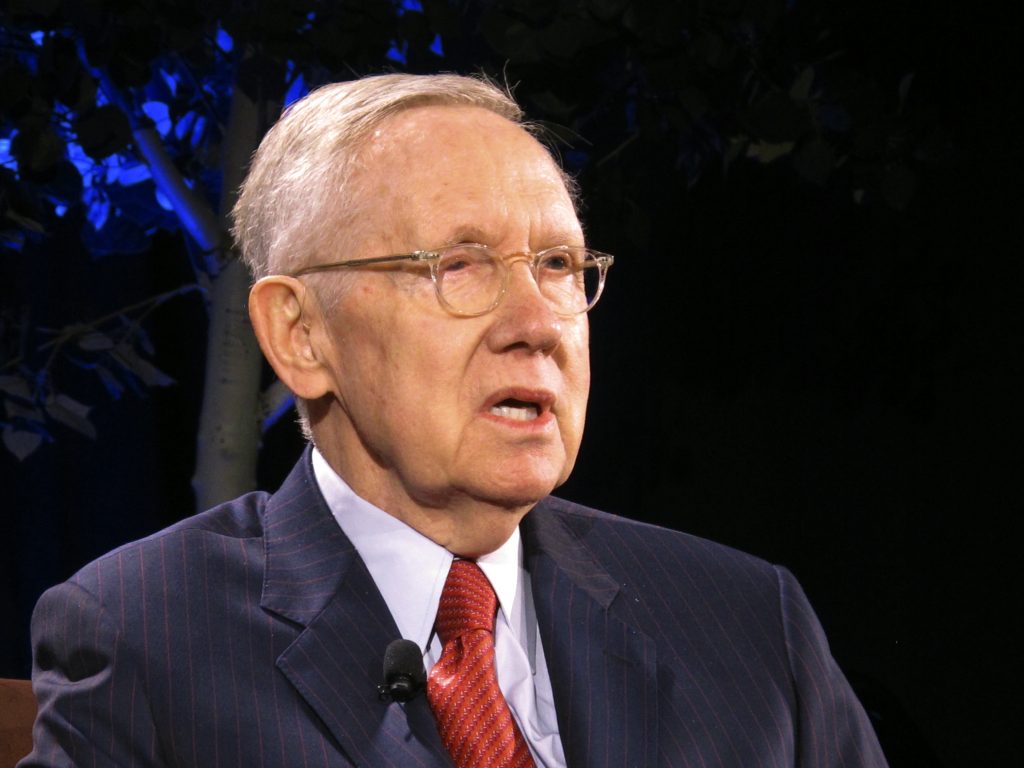 Former U.S. Senate Majority Leader Harry Reid says images of a protester holding a sign with a swastika on it at a recent rally in Nevada for Bernie Sanders are the latest sign of a disturbing rise in anti-Semitism in America.

Reid said it was “embarrassing” that someone brought the swastika sign to the Henderson rally, noting it came on the heels of other reports of recent hate speech in Nevada, including swastikas found spray-painted on a building at the University of Nevada in 2017.

The longtime Nevada Democratic senator, who plans to host a talk on anti-Semitism on Thursday night at the University of Nevada, Las Vegas, says state and federal hate crime laws need to be strengthened and America needs to examine all forms of bigotry.

“I think there’s too much hate,” said Reid, whose wife, Landra, was raised Jewish.

“Whenever there’s hate going on, Jews get a bad deal,” he said.

He’ll be joined Thursday by Deborah Lipstadt, an Emory University professor and a leading authority on the Holocaust, and journalist Jonathan Weisman. Both have published books recently examining the rise of anti-Semitism in America.

In 2017, the year of the deadly white nationalist rally in Charlottesville, Virginia, the FBI reported a 37 percent increase in anti-Semitic hate crimes in America. The numbers — the most recent available — include more than 900 reports of crimes targeting Jews and Jewish institutions.

Reid’s discussion comes as President Donald Trump continues to highlight a political firestorm over February remarks from Democratic Rep. Ilhan Omar of Minnesota, one of the first Muslim women in Congress, which were criticized by some as anti-Semitic. Omar’s comments suggested supporters of Israel have dual allegiances and that lobbyists with the American Israel Public Affairs Committee paid lawmakers to support Israel.

President Trump has publicly mused about winning over Jewish voters and asserted that Democrats had become an “anti-Israel” and “anti-Jewish” party and “hate” Jews.

“The Democrats have even allowed the terrible scourge of anti-Semitism to take root in their party and in their country,” Trump said in Las Vegas over the weekend at a meeting of the Republican Jewish Coalition.

Reid declined to say whether he felt Omar’s comments were anti-Semitic or whether Democrats in the House properly responded by voting to condemn anti-Semitism and other bigotry. He said Omar’s comments have “been debated publicly, privately, and my adding my opinion today will add nothing to the discussion.”

He did say he believes it’s a mistake for Republicans to use anti-Semitism as a partisan wedge issue, saying that Jews have historically voted Democratic and they’ll continue to do so, but “I think we have to keep politics out of it.”