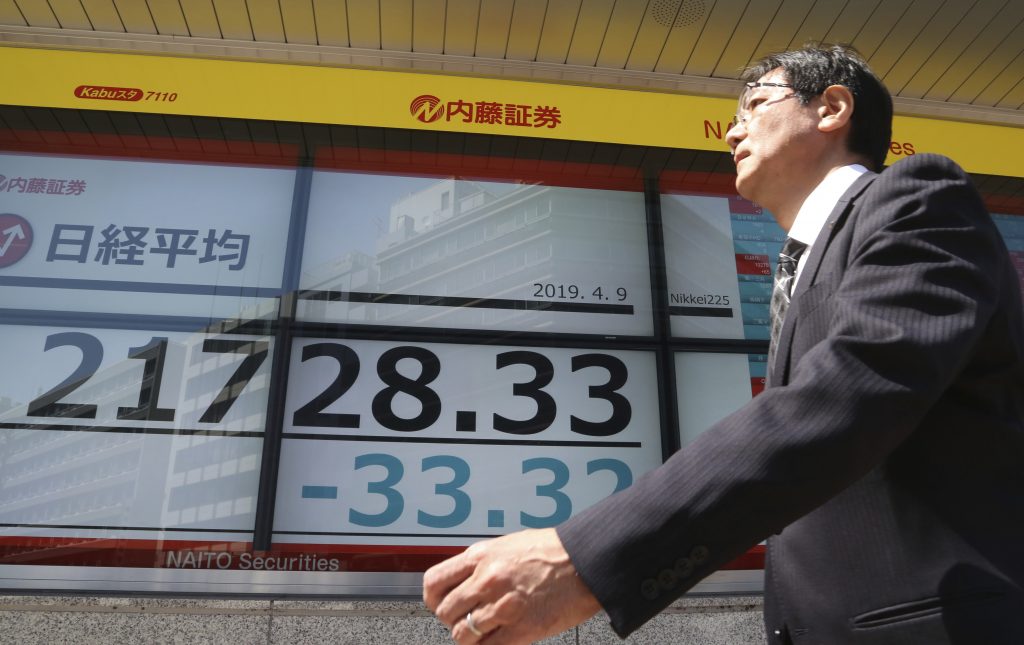 April’s equities rally risked running out of puff on Tuesday, as a U.S. threat to slap tariffs on hundreds of European goods and expectations of another chunky chop to the IMF’s global growth forecasts tested investors’ stamina.

Asia had eked out an eight-month high overnight but Europe was left flat after the office of the U.S. Trade Representative sent its proposals to the World Trade Organization, saying the EU had provided $11 billion worth of subsidies to Airbus.

The plane-maker’s shares dropped as much as 2.5 percent in early deals. Many of its key suppliers lost between 0.7 percent and 1.2 percent, though it could have been worse and most of Europe’s big bourses clawed back to level.

Aberdeen Standard Investment’s head of global multi-asset strategy, Andrew Milligan, said: “Signals like this just remind people … that the strategic rivalry between the U.S. and other countries is serious and is not going to go away.”

The day’s other focus was set to be the International Monetary Fund’s half-yearly forecasts, which are likely to reinforce the message that trade spats are contributing to slowing the global economy.

The Fund is expected to make quite a sizable cut to its growth number and Germany’s benchmark 10-year bond yield stayed just below zero percent on bets that interest rates are set to stay extremely low globally.

In the FX market, Sterling nudged higher as U.K. Prime Minister Theresa May prepared to meet Germany’s Angela Merkel and France’s Emmanuel Macron to ask for another Brexit delay.

The Australian and Canadian dollars and Norwegian crown and Russian ruble also rose as a surge in oil prices to five-month highs lifted most other commodity-linked currencies too.

Oil prices – up more than 40 percent this year – have jumped on expectations that global supplies will tighten due to fighting in Libya, OPEC-led cuts and U.S. sanctions against Iran and Venezuela.

“Concerns over the potential squeezing of supply in Libya following the escalation of violence there are adding fresh impetus,” analysts at JBC Energy wrote.