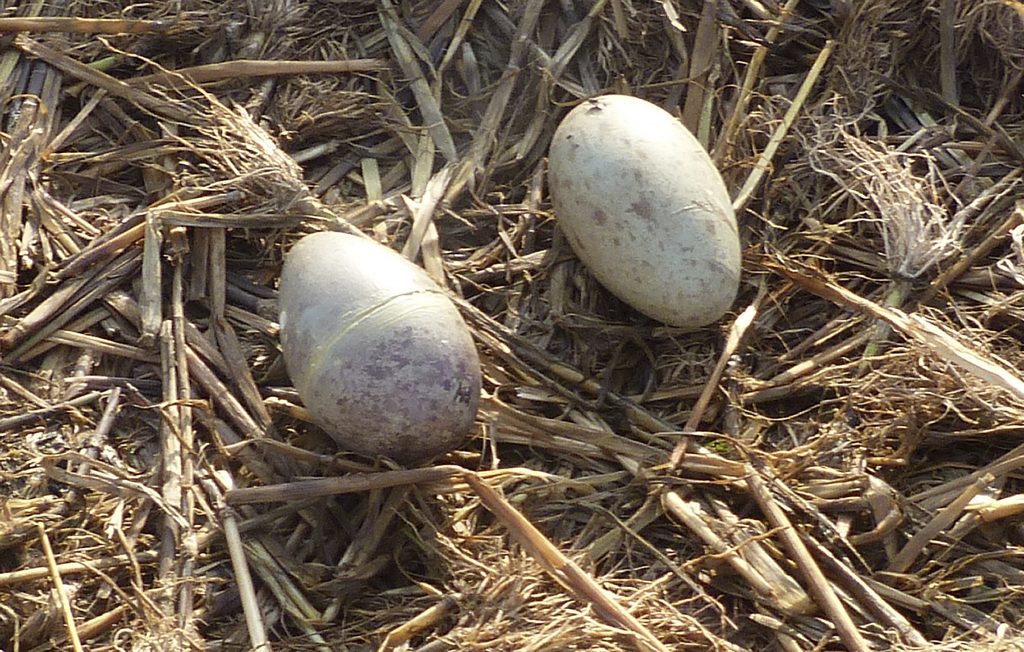 Scientists are using fake eggs to spy on whooping cranes in hopes of learning why some chicks die in the egg, while others hatch.

Data gathered by the spy eggs could help biologists in Louisiana and Canada preserve the endangered long-legged birds, which have made a tenuous rebound after dwindling almost to extinction in the 1940s.

“It’s a fascinating way of spying on endangered species… in a way that allows us to assist in the recovery,” said Dr. Axel Moehrenschlager, the Calgary Zoo’s director of conservation and science.

The Louisiana wildlife biologists swap the egg-shaped data loggers for one of the two eggs that many cranes lay. The real eggs come to Audubon Nature Institute ‘s Species Survival Center in New Orleans, where they’re incubated until they’re nearly ready to hatch … or not.

Then the biologists in Louisiana swap the real eggs back into the nests.

The electronic data loggers use infrared connections to transfer information to nearby computers. It’s sent for analysis to scientists in Calgary, where the only remaining wild natural flock of whooping cranes is based.

Whoopers are the tallest birds and rarest cranes in North America. They stand about 5 feet tall, with black-tipped wings that span nearly 7 feet.

Overhunting and habitat loss cut their numbers to 21 in the 1940s, but with some help from humans the number had risen to about 850 at the end of 2018.

Louisiana is home to 74 whooping cranes in the wild.

“We’ve got some pairs that haven’t been successful, and we want to see if we could see what might be going on with them,” said Sara Zimorski, a biologist with the Louisiana Department of Wildlife and Fisheries.

“In the bigger picture, we don’t know a lot about wild nest incubation,” she said. The new information may help improve provisions for captive pairs and settings for incubators.

Richard Dunn, curator at the Species Survival Center, says he hopes to learn if he needs to tweak incubator settings to more closely mimic Louisiana’s climate, which is hotter and damper than the northern settings where previous studies were done.

A crane expert who’s not affiliated with the Louisiana effort said those are entirely reasonable aims. Scott A. Shaffer, a San José State University professor, has been working with data logger eggs since 2010 to study a variety of birds in a number of places. He said the tiny, low-power sensors that reorient tablet and smartphone displays as the devices are moved have helped drive technology that checks for egg turning, allowing second-by-second studies of eggs.

The whooping crane data logger eggs log temperature, humidity and position once a minute. They can also detect when eggs are turned — an important part of keeping developing birds healthy. They were developed by a team of Canadian and U.S. scientists who compared nests of captive whooping cranes and sandhill cranes at the Calgary Zoo’s Devonian Wildlife Conservation Centre to incubators, hoping to improve the hatching rate of incubated eggs.

Their study, published in 2012, helped people raising the cranes in Canada and the U.S. to adjust incubator temperature and humidity settings, Moehrenschlager said.

The Species Survival Center on New Orleans’ west bank houses 36 of the 163 whooping cranes currently living in captivity, including 10 destined for a new facility under construction by the Dallas Zoo. None of the birds at Audubon has yet begun nesting, Dunn said.

Zimorski and fellow Louisiana wildlife biologist Phillip Vasseur put a few data loggers out last year to be sure the birds would tolerate the intrusion of eggs being swapped in and out.

Zimorski said the birds decide much of the wild deployment, since many this year are nesting in inaccessible swamps where biologists keep tabs on them through airplane flyovers.

Both Zimorski and Dunn said there’s nowhere near enough data yet for any conclusions.

“We need a couple more years so we can get additional pairs and some years of repeat data,” Zimorski said.