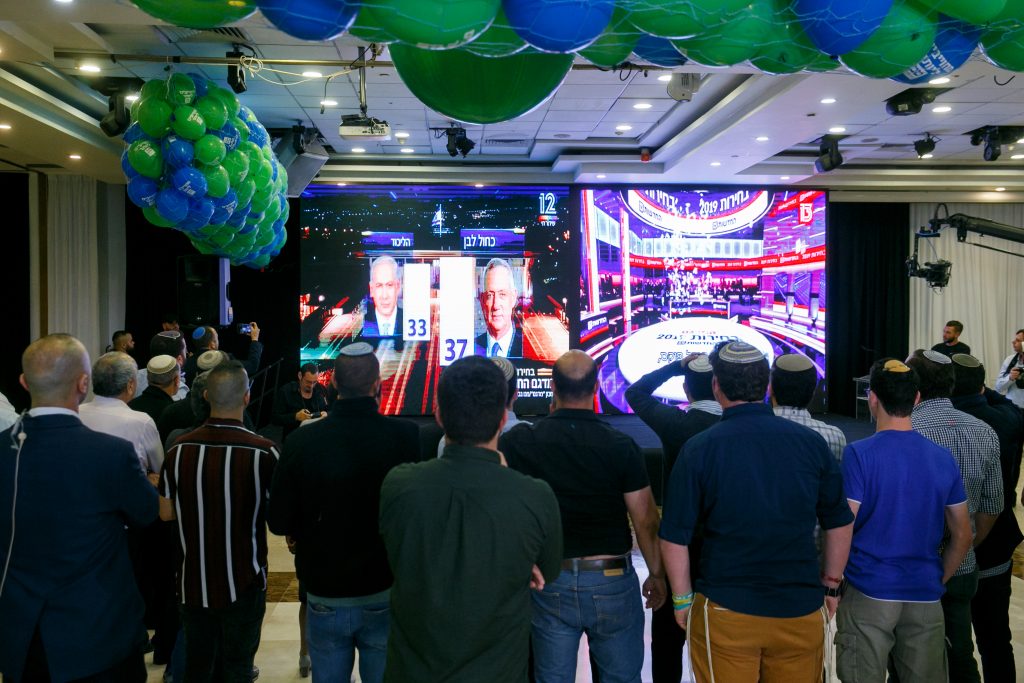 Both Israeli Prime Minister Binyamin Netanyahu and Blue and White chairman Benny Gantz declared themselves the victors on Tuesday night, based on exit polls that showed a close race, and official results not expected until the early morning hours.

“We won! The Israeli public has had its say!” Gantz’s Blue and White party proclaimed, as two of three exit polls showed them ahead of Likud by as much as four mandates, and one said it was a tie.

Yet, at the same time, without explicitly conceding anything, Netanyahu called it a victory for the right wing:

“The right-wing bloc led by the Likud won a clear victory. I thank the citizens of Israel for your trust. I will start assembling a right-wing government with our natural partners already this evening,” he tweeted.

Poll findings gave Netanyahu as much as a 66-54 edge in the total number of Knesset seats, though one called it a tie. That poll, Channel 12, had Gantz leading Netanyahu by four seats, 37-33. But the configuration overall was 60 for the right wing, 48 for center-left, and 12 for the Arab parties.

Netanyahu had warned during the campaign that Gantz’s only hope of forming a coalition would be with the support of the Arab parties, which now seems to be the case. However, Gantz countered by saying that if he won more votes, he would seek a coalition with Likud, not the Arabs.

The unofficial results contained a few shockers. The Bennett-Shaked New Right and Moshe Feiglin’s Zehut parties failed to make the electoral threshold. New Right had been sinking slowly in recent days’ polls, but Feiglin was predicted to get four to seven seats, and was hailed by some as a putative kingmaker.

“I’m sad, and I’m also frustrated, it’s just hard to understand right now, the last polls had us with eight seats, so I don’t understand how we went from 8 to 0,” says Albert Levy, a French-Israeli businessman who is eighth on the Zehut list.

Orly Levy-Abecassis’s Gesher did not cross the threshold.

It cannot be overemphasized that exit polls do not determine the results, and have been misleading in the past. In 2015, the exit polls predicted a tie between Isaac Herzog’s Zionist Union and Netanyahu’s Likud, but when the votes were actually counted, Likud had won by six seats.

In the final analysis, the identity of the next prime minister will depend on coalition politics, not just which party had the most votes. President Reuven Rivlin will meet with the leaders of all the parties that cleared the electoral threshold, to ascertain which party leader has the best chance of forming a coalition of at least 61 out of the 120 elected Knesset members, and task him with assembling a new government. If he fails, Rivlin will assign the job to the next most likely candidate.

Given the unreliablility of Israeli exit polls, party leaders declined on Tuesday night to commit themselves to either Netanyahu or Gantz.

Kulanu chairman Moshe Kahlon wouldn’t say if he’ll recommend Netanyahu to President Rivlin as the next prime minister, according to Ynet.

Avigdor Liberman said he will wait for the final results before making a decision.

By law, the final election results must be published within eight days of the voting, but a spokesman for the Central Elections Committee said the counting, which is done by hand, would be completed on Thursday afternoon.