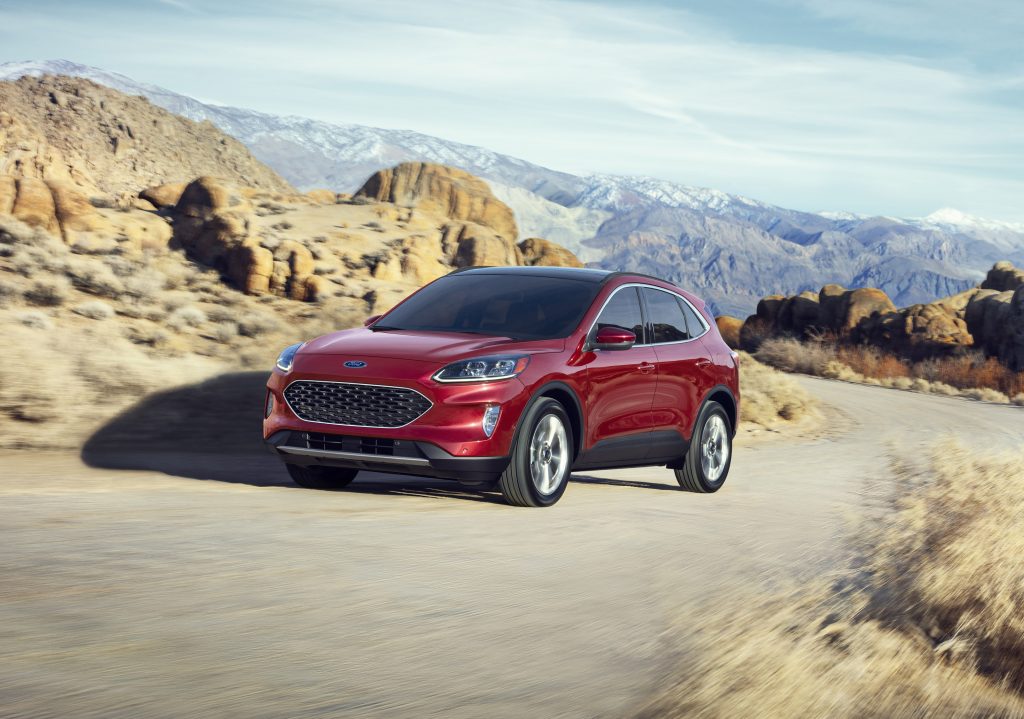 The completely redesigned 2020 Ford Escape, a popular compact SUV and the company’s No. 2 best-selling vehicle after the Ford F-Series pickup, debuted this week.

The 2020 Ford Escape, which goes on sale in the fall, is designed to compete primarily with the Honda CR-V and Toyota RAV4.

This is the Escape’s first complete redesign since the 2013 model year.

Consumers said they wanted more leg, hip and shoulder room for passengers than in previous designs. So the company delivered.

During a media preview at Greenfield Village, the Free Press asked athletes on-site for the celebration to get into the Escape. Its second row comfortably held three basketball players from the University of Michigan-Dearborn.

The second row also slides back, said Jennifer Comfort, Escape architecture supervisor. “This was identified as a key issue for outgoing customers. We read a lot of customer satisfaction data and made huge improvements.”

Tall drivers wanted more room behind the steering wheel, and that changed, too.

In the fall, consumers will see the traditional internal combustion engine Escape and a hybrid arrive in showrooms. In spring 2020, plug-in hybrids that target a pure-electric range of more than 30 miles will arrive.

A Way to ‘Decompress’

This Ford Escape is designed for buyers “looking for simplicity in a very hectic world,” said Jim Hughes, chief program engineer at Ford. “They want to live their lives without constraints. This vehicle must stand up to the rigors of an urban lifestyle and be ready for hiking, biking and going to the beach.”

He told of a woman he met doing consumer research who kept two beach chairs in her vehicle at all times, so on nice evenings she could take a longer route home from work and stop at the beach “to decompress.”

Like the Ford Explorer, a 2020 Escape has drive settings that offer enhanced traction for snow, sand and rain. Options include front-wheel and all-wheel drive.

Rear cargo space is a perk in the new Escape. With the second-row seats on full forward position, gas engine-powered models are designed to accommodate four sets of golf clubs or a full-size dog crate.

Escape, which debuted as the world’s first hybrid SUV in 2005, is offering two choices in 2020. The hybrid and non-hybrid vehicles have different storage measurements.

And design? Ford says the trapezoidal grille is inspired by the sixth-generation Mustang, while the lower part of the nose borrows from the Ford GT. The new Escape is lower, wider and longer than the 2019 model. The rear spoiler and sloping roofline contribute to making it the most aerodynamic Escape ever. Ford said that fuel economy figures aren’t yet available.

Debra Hands, Escape aerodynamics supervisor, used a wind tunnel to study and reduce drag from mirrors, spoilers, grille shutters, fog lamp pockets, roof rails and the “smooth flat underbody that a customer doesn’t see but it helps, whether they know it or not.”

Kumar Galhotra, Ford president, North America, joked that while it’s always much easier to put on weight than take it off, the new Escape is more than 200 pounds lighter than the current model, due, in part, to use of high-strength lightweight steel. Yet it grew in size.

Escapes are available with a new head-up display that projects information onto a 6-inch screen, so drivers can monitor vehicle speed without taking their eyes off the road. Wireless charging is available. Remote lock, unlock, stop and start, too.

The latest Escape Hybrid packages its liquid-cooled lithium-ion battery below the second-row seats rather than in the cargo area. The briefcase-shaped battery in the standard hybrid is about one-third the size of the old Escape Hybrid battery.

When You’re Having ‘a Really Bad Day’

Active parking assist allows the driver to parallel or perpendicular park with the touch of a button — no need to work the steering wheel, gas or brake pedal. Evasive steering assist detects slow-moving or stationary objects and provides steering support to avoid collision.

Incredibly, Hearn recently provided aid prior to the arrival of first responders when two sedans collided in Dearborn, leaving both drivers injured with air bags deployed.

“The world has become crowded and distracted,” he said.

At the same time the Escape debuts in America, the European version, called the Kuga, was introduced in Amsterdam. The U.S. event will host car dealers and employees at Greenfield Village.

Ford has sold more than 4.5 million Escapes since their introduction in 2001, and more than 6.7 million globally when including the Kuga in Europe and Asia Pacific.

“The Escape is arguably the most important vehicle for Ford behind the F-Series,” said Jessica Caldwell, executive director of industry analysis at Edmunds, an online car shopping network. “Small SUVs are not only the best-selling segment, they have displaced the midsize sedan as America’s favorite family vehicle.”

The Ford Escape is built at the Louisville Assembly Plant in Kentucky.