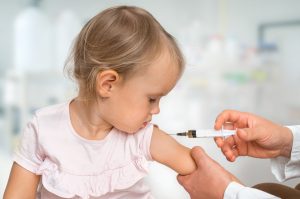 Ten days after a New York county banned unvaccinated children from public places in an effort to stem the rise of measles cases, a state judge put the injunction on hold.

“Children are hereby permitted to return to their respective schools forthwith and otherwise to assemble in public places,” Judge Rolf Thorsen wrote in his Friday decision.

The controversial ban, announced by a spokesman for Rockland County Executive Ed Day, was an effort to address an outbreak in Rockland County, where 167 confirmed cases of measles had been reported as of Friday.

Dorit Reiss, a professor at U.C. Hastings College of Law in San Francisco, said a ban by executive order was an unusual step, one that prompted outrage in the national anti-vaccine community.

But she saw it largely as a symbolic measure.

“It wasn’t as aggressive as it could have been,” Reiss said. “They weren’t intending to do mass arrests.”

Thorsen made his ruling after some parents from a private Waldorf school filed a suit calling the action “arbitrary, capricious” and “an unprecedented ‘declaration of a local emergency.’ ” The parents claimed that the county had acted beyond its legal authority. They said the declaration caused “children to be denied attendance at nursery programs and schools and has effectively prohibited their movement and denied them the right to congregate and assemble in public places.”

Thorsen’s decision, Reiss said, rested on the question of whether the outbreak was an emergency. With an outbreak of such a highly contagious virus, she said, “There is a reasonable argument that it is an emergency.”

Measles can cause pneumonia, brain damage, hearing loss and even death, according to the Centers for Disease Control and Prevention. Between Jan. 1 and late March, 387 cases of measles have been confirmed in 15 states across the country, from California to Kentucky to New Jersey – the second-greatest number of cases since measles was eliminated in the United States in 2000.

The measles outbreaks – and the increasingly aggressive public health response to them – have also prompted a spike in activity among anti-vaccine activists. Across the nation and around the world, a global movement that spreads misinformation about vaccines has helped drive down child immunizations, lowering the community immunity that is critical for protection against one of the world’s most contagious diseases.

Reiss suspects that it may not be worth it to local officials to fight Thorsen’s ruling.