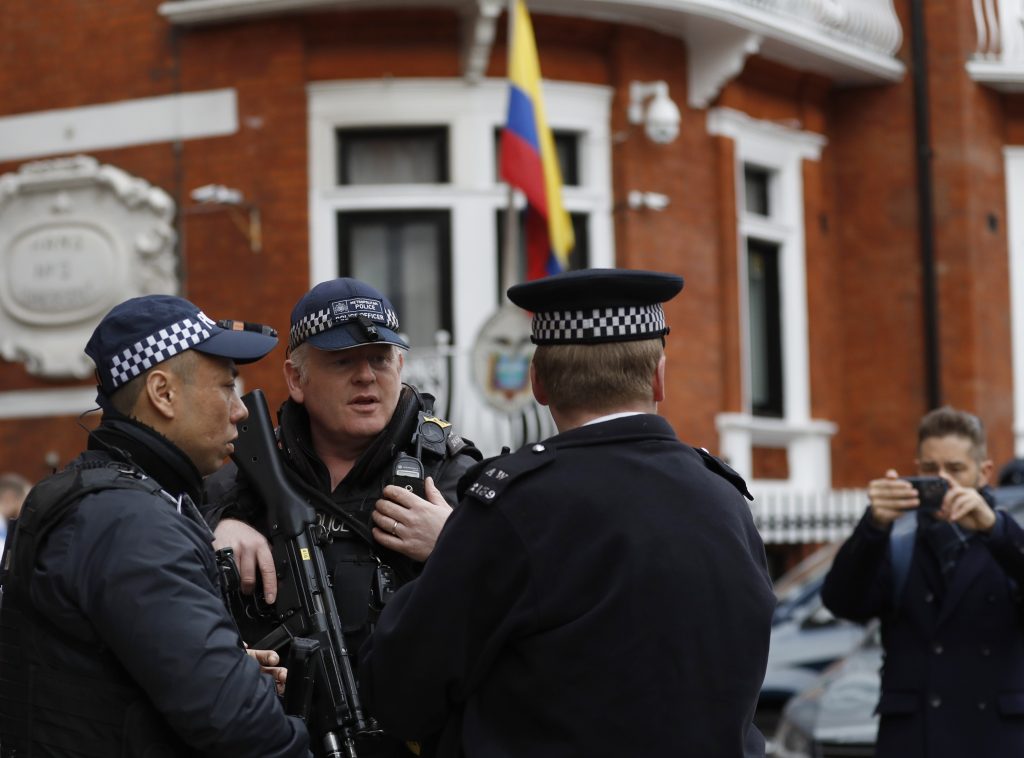 British police stationed armed officers outside the Ecuadorian Embassy in London on Friday after tweets from WikiLeaks quoted what it said were high-level sources saying that Julian Assange could be kicked out of the building within “hours to days.”

The red-brick embassy building with white window frames and balconies was quiet, though a few protesters gathered outside. No embassy official commented on the WikiLeaks founder’s status, while British Foreign Secretary Jeremy Hunt said Assange is a “free man” and can leave the embassy whenever he chooses.

Asked about the presence of armed officers outside the Ecuadorian Embassy, London’s Metropolitan Police force said there had been no change in police procedure.

Police said in a statement there is an active warrant for Assange’s arrest and that the police are “obliged to execute that warrant should he leave the Embassy.”

Police withdrew the round-the-clock guard outside the embassy in October 2015 after more than three years in favor of what the service called a “covert” approach.

Assange hasn’t left the embassy since August 2012, fearing if he steps off Ecuador’s diplomatic soil he will be arrested and extradited to the U.S. for publishing thousands of classified military and diplomatic cables through WikiLeaks.

Ecuador’s foreign ministry issued a statement late Thursday saying it wouldn’t comment on what it called “rumors, theories or conjectures.”

Later, a senior official told The Associated Press that no decision had been taken to expel Assange from the embassy.

WikiLeaks argued in a statement Friday that forcing Assange out of the embassy would be illegal and a violation of international law on refugees.

Hunt said that “Julian Assange is a free man” and “can leave that embassy whenever he wants to, so we want the situation resolved as quickly as possible.” Asked whether he thought that was likely, the British foreign secretary replied: “That’s up to him”

On Friday morning, a van appeared outside the building showing a placard that said “Free Speech” and featured images of Assange and convicted classified document leaker Manning. Police moved it on.

WikiLeaks on Thursday tweeted: “BREAKING: A high level source within the Ecuadorian state has told @WikiLeaks that Julian Assange will be expelled within “hours to days” using the #INAPapers offshore scandal as a pretext–and that it already has an agreement with the UK for his arrest.”

Another tweet said it had received a secondary confirmation from another high-level source.

But a top official said while Ecuadorian President Lenín Moreno was angered by the apparent hacking of his personal communications, he denied WikiLeaks’ claim and said no decision had been taken to expel Assange from the Embassy. The official spoke on the condition of anonymity because he wasn’t authorized to discuss the matter.

On Tuesday, Moreno blamed WikiLeaks for recent allegations of offshore corruption that in appeared in local media outlets and the publication of family photos to social media.

Moreno provided no evidence, but the speech reflected ongoing tension between Assange and his hosts at the Ecuadorian Embassy in London.

WikiLeaks in a statement called Moreno’s charges “completely bogus,” saying it reported on the accusations of corruption against the president only after Ecuador’s legislature investigated the issue.

Assange’s defense team suggested on Twitter that Moreno was trying to use the scandal to pressure the WikiLeaks founder.