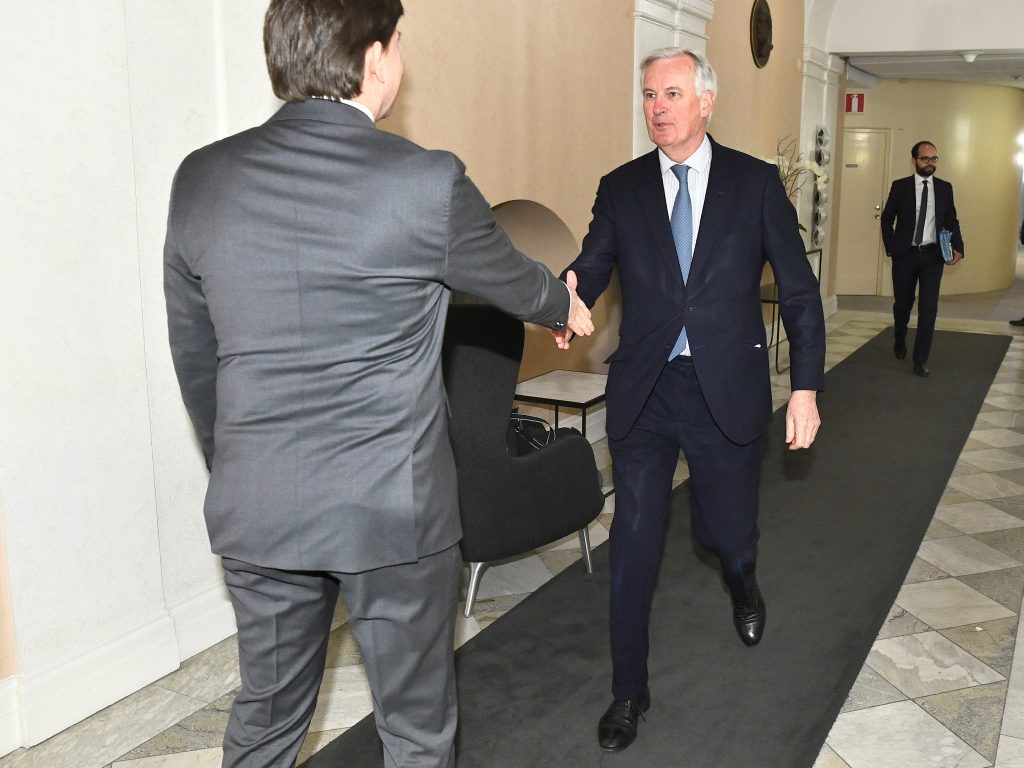 The British government and senior opposition figures were meeting Thursday in search of a new plan on how the country leaves the European Union as Prime Minister Theresa May tried to stop her shift toward compromise from splitting her Conservative Party.

May faced fury from anti-EU Conservatives after she agreed to talks with Labour Party leader Jeremy Corbyn, who favors a softer form of Brexit than that advocated by the government. Two junior ministers have resigned, and more could follow.

Treasury Chief Philip Hammond said both parties needed to be flexible to break the Brexit impasse.

“When you enter into a negotiation like this to find a compromise way forward, both parties have to give something up,” he told ITV channel. “There is going to be pain on both sides.”

Britain’s political paralysis over Brexit has left the country facing a possible cliff-edge departure from the EU in just over a week.

After U.K. lawmakers three times rejected an agreement struck between the bloc and May late last year, the EU gave Britain until April 12 to approve a withdrawal agreement, change course and seek a further delay to Brexit, or crash out of the bloc with no deal to cushion the shock.

Economists and business leaders warn that a no-deal Brexit would cause huge disruption to trade and travel, with tariffs and customs checks causing gridlock at British ports and possible shortages of goods.

Lawmakers desperate to avoid a chaotic exit have seized control of the parliamentary agenda to pass a hastily drafted bill that compels May to ask for an extension to the Brexit deadline if a no-deal departure is looming.

The bill was approved by the House of Commons late Wednesday by a single vote, and was being debated Thursday in Parliament’s upper chamber, the House of Lords.

If it passes, May will have to go to a special EU Brexit summit in Brussels on April 10 to seek a delay.

The EU is not compelled to agree. Leaders of the bloc, exasperated by the chaos in London, say they will only grant a delay to Brexit if Britain comes up with a workable new plan.

French President Emmanuel Macron, one of the leaders most resistant to a further Brexit extension, has warned that the bloc can’t be held “hostage” to Britain’s crisis.

Worries about a no-deal Brexit are especially acute in Ireland, the only EU member state to share a land border with the U.K. Any customs checks or other obstacles along the currently invisible frontier would hammer the Irish economy, and could undermine Northern Ireland’s peace process.

With passions running high both inside and outside Parliament, police warned politicians to tone down their rhetoric.

“But I think there is a responsibility on those individuals that have a platform and have a voice, to communicate in a way that is temperate and is not in any way going to inflame people’s views,” he said.