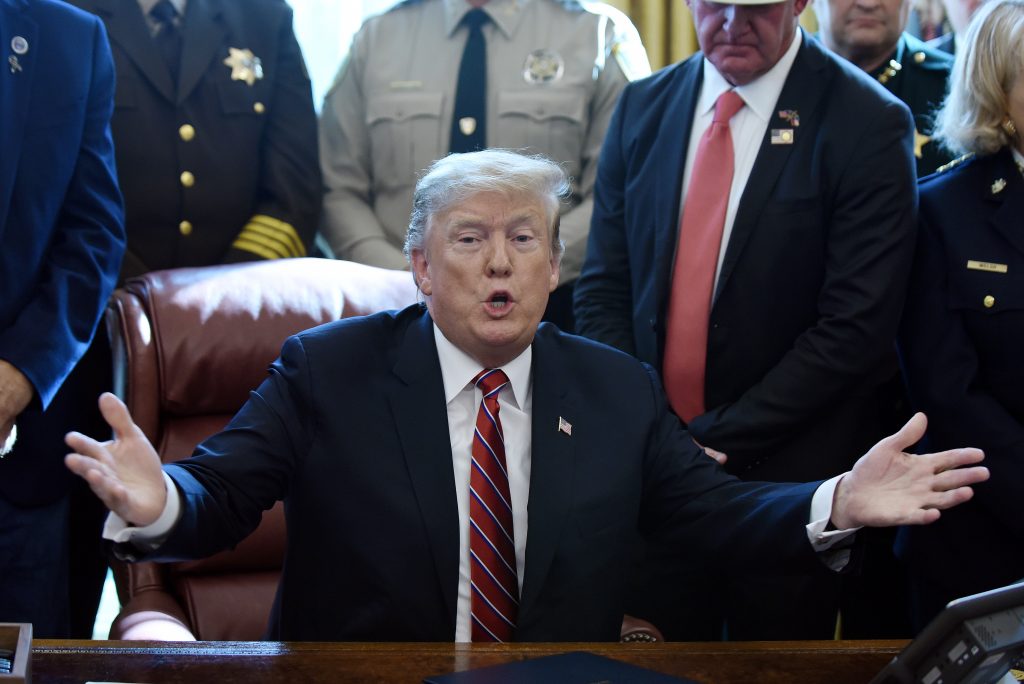 President Donald Trump has found an alternative to his threat to close ports of entry at the southern border: He is now threatening to first slap tariffs on Mexican-made automobiles as a punishment for migrants and drugs coming into the U.S.

On Thursday he demanded that the Mexican government provide additional assistance in curbing the amount of undocumented migrants and illegal substances moving into the United States from its soil. Trump and his team are eager to shrink the number of attempted border crossings and apprehensions, which have increased under his watch despite his hard-line immigration policies.

“If Mexico doesn’t give the help, that’s OK. We’re going to tariff the cars coming into the United States,” he said. “The only thing less drastic than closing the border is to tariff the cars. And I will do it. … I don’t play games.

Trump made the demand despite the fact that U.S. automakers have production facilities in Mexico that they use to build models that are shipped to and sold in the United States. The threatened import fees would ding those companies’ bottom lines, possibly triggering cost-cutting moves that could cost Americans jobs at U.S.-based facilities.

The president suggested at one point during off-the-cuff remarks during an unrelated event at the White House that the tariffs might also apply to other “Mexican products.” But he singled out autos because “with many countries, it’s cars” — meaning import fees on automobiles cause great economic damage.

White House officials have not responded to an inquiry about any presidential concerns that U.S. auto manufacturers, workers and customers would inevitably be affected if he put the import fees in place.

Trump’s latest threat came a day after auto executives were on Capitol Hill trying to drum up support against automobile tariffs in general. Tom Doll, president and CEO of Subaru of America, told Bloomberg that the executives were getting “a lot of sympathy from the Congress folks.”

“Nobody really wants these tariffs. They’re not good for the consumer. Ultimately, the price of the car has to go up,” Doll said. “Depending on who you listen to, the effect could be … $5,000 to $7,000 on the high end.”

The move is vintage Trump, who often makes threats in the pursuit of leverage over another country or Democratic lawmakers. He is eager to make immigration a 2020 reelection issue, and his one-year warning would put the tariffs in place as the next campaign cycle would be about to kick into a full gear.

At least publicly, even White House chief economic adviser Lawrence Kudlow — long a tariffs skeptic — credits the president’s import taxes with helping him pressure China to the negotiating table about a trade pact.

Now, Trump is making the same bet with Mexico.

House Democratic leaders had been discussing whether to bring a resolution to the floor to object to Trump’s threat to shutdown the border. Texas Reps. Henry Cuellar and Veronica Escobar introduced one on Thursday, which Speaker Nancy Pelosi praised during her weekly news conference later that morning.

But asked afterward if she planned to bring the resolution to the floor for a vote, Pelosi told Roll Call, “Right now we’re hoping that the president will back down. This is so foolish. We now have word that perhaps he’ll back down.”

Just minutes before news broke that Trump was backing off his threat to shut down the southern U.S. border, House Minority Leader Kevin McCarthy (R-Calif.) told reporters he didn’t think Trump would move forward with the idea.

Reporters were still talking to McCarthy as the news broke about Trump backing off the threat, but when Roll Call asked if he had talked to the president about moving in that direction, McCarthy smiled, turned and walked away.

The White House says Trump, McCarthy and others will be viewing new sections of Trump’s proposed border wall — but they actually will see replacement sections of an existing barrier.