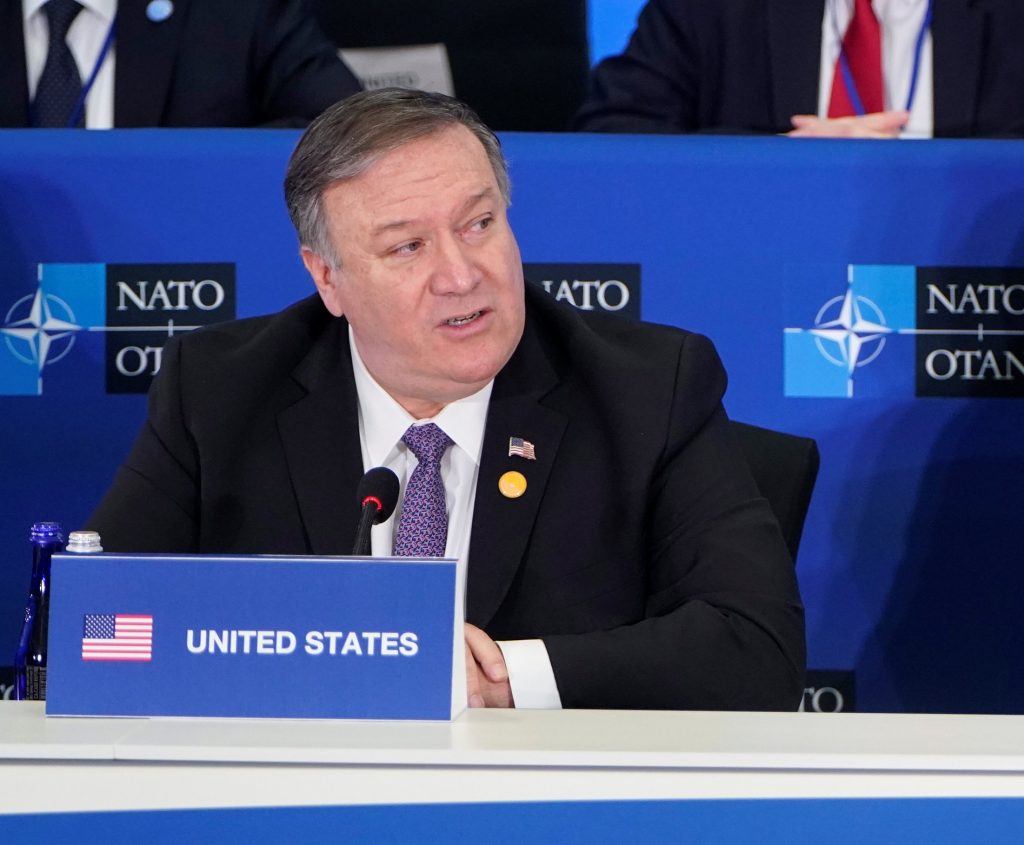 Secretary of State Mike Pompeo on Thursday called on NATO allies to adapt to confront emerging threats, including Russia’s military interventions in places such as Venezuela, Chinese strategic competition and cyber threats.

“We must adapt our alliance to confront emerging threats … whether that’s Russian aggression, uncontrolled migration, cyber attacks, threats to energy security, Chinese strategic competition, including technology and 5G, and many other issues,” Pompeo said.

Speaking to reporters after the meeting, Pompeo said NATO members had agreed Russian troops needed to withdraw from Venezuela, where they were deployed in support of President Nicolas Maduro, who is under pressure from a coalition of more than 50 countries, including the United States, to step down.

Pompeo said Venezuela was raised during discussions on ways to respond to Moscow’s increased foreign military activity in places such as the Black Sea, where Russia seized three Ukrainian naval vessels last November.

Venezuela’s deputy foreign minister, Ivan Gil, said on Thursday that Russian forces would stay in Venezuela as long as needed and did not rule out the possibility more could be added, Interfax news agency reported.

NATO chief Jens Stoltenberg called on Moscow to release the Ukrainian vessels and their crews. He said the NATO allies had agreed on a package of measures to step up support for Ukraine and Georgia that included increased surveillance drills and “training of maritime forces and coast guards, port visits and exercises, and sharing information.” Ukraine and Georgia, which like Ukraine is a Russian neighbor and part of the former Soviet Union, are not NATO members.

Stoltenberg said Russia’s breach of the 1987 Intermediate-range Nuclear Forces (INF) Treaty was part of a “pattern of destabilizing behavior.”

Washington has said it will withdraw from the treaty this summer unless Moscow ends its alleged violations of the pact, which rid Europe of land-based nuclear missiles.

Stoltenberg said NATO’s response would be “measured and coordinated” and “not mirror what Russia is doing.”

“We have no intention of deploying ground-launched nuclear missiles in Europe,” he said.

Pompeo said NATO should also confront increased cyber warfare, including from China and Chinese tech company Huawei Technologies, which is under scrutiny from Western intelligence agencies for its perceived ties to China’s government and the possibility its equipment could be used for espionage.

Washington has warned it will not partner with countries that adopt Huawei systems but has been at odds on the issue with the European Union, which has shunned U.S. calls to ban the company across the bloc. The bulk of NATO members are EU countries.

Pompeo warned that neither NATO nor the United States would be able to fully share information with allies if there were Chinese systems in their security networks.

“We have made clear that if the risks exceed the threshold for the United States, we simply won’t be able to share that information any longer,” he said.

The United States has also been at odds with European countries over the failure of many of them to meet NATO defense spending guidelines of 2 percent of gross domestic product.

President Donald Trump has called on NATO countries to pay even more than 2 percent of their GDP for defense and has singled out Germany for not doing enough.

Stoltenberg said Germany was now making progress, but all allies needed to do more.

“All NATO allies made a pledge to invest more in defense to improve burden sharing in our alliance, and I expect all allies, including Germany, of course, to make good on the pledge we made together,” he said.

“We didn’t make this pledge to please the United States. We made it because we live in a more unpredictable and uncertain world.”

The meeting was overshadowed by tensions between the United States and Turkey over Ankara’s plan to go ahead with the purchase of S-400 missile defense systems from Russia.

Washington says Turkey’s purchase of the system would compromise the security of F-35 fighter jets, which are built by Lockheed Martin Corp and use stealth technology.

Vice President Mike Pence warned on Wednesday that Turkey could risk its membership in NATO if it went ahead with buying the S-400. The United States has halted delivery of equipment related to the F-35 to Turkey over its S-400 plans.

Pompeo said the United States was confident of a “path forward” to resolve the issue after talks with Turkish Foreign Minister Mevlut Cavusoglu on Wednesday, although Cavusoglu reiterated on Thursday that the purchase was a “done deal” that could not be canceled.