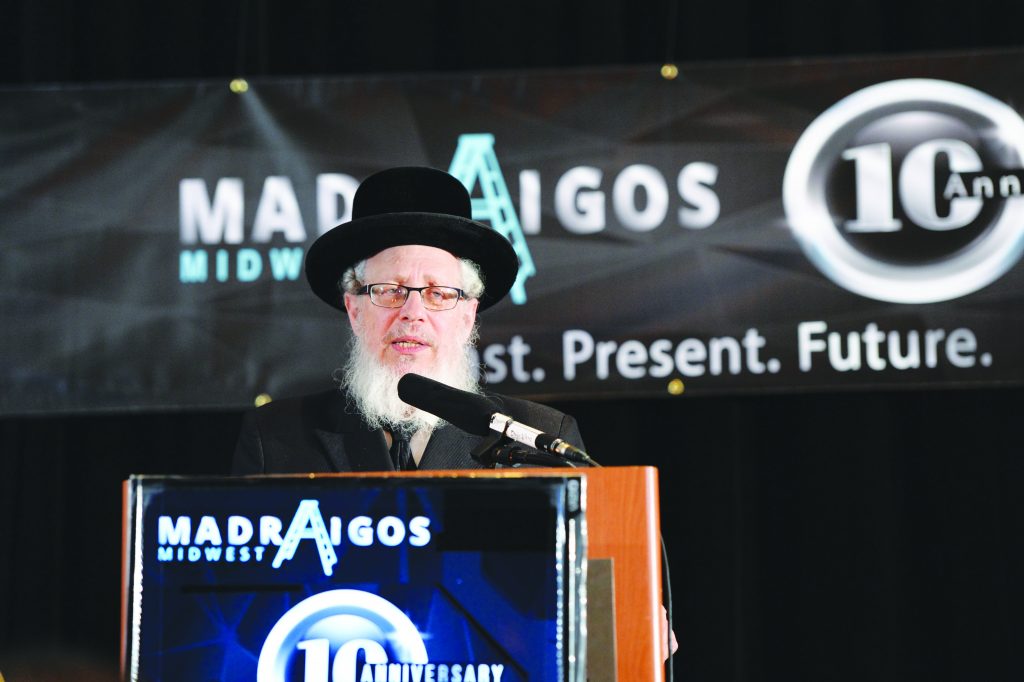 On Wednesday, March 27, Madraigos Midwest hosted their 10th anniversary dinner, with the theme “Celebrating the Past, Acknowledging the Present, Transforming the Future.”

The event showed recognition to the founders of the organization, Mr. Shua Ray and Mr. Nachy Shabat, and presented the Special Rabbinic Visionary Award to Rabbi Chaim Twerski, Rav of Bais Chaim Dovid, whose vision and guidance has been driving the organization since its inception.

Madraigos Midwest is an organization that supports and enhances the emotional, social and spiritual health of adolescents, young adults and their families with an array of innovative prevention and intervention programs and services that guide, encourage and uplift youth to reach their potential.

The anniversary dinner was emceed by Mr. Nesanel Davis, who began by thanking all the Madraigos Midwest staff and all those involved in planning the dinner. A powerful video was shown, profiling three typical stories of the type of people in the community who Madraigos helps.

A second video was then shown, highlighting the indispensable rabbinic guidance that Rabbi Twerski has provided the organization since its inception. Rabbi Twerski was described as a visionary, who understood the communal need, allowed the dream to become a reality, and made sure that is was successful and accepted on every level.

“We live in a time where drugs are available, problems are many, and emotional stability is not a given,” Rabbi Twerski asserted on the video. “If we don’t address these problems, we will have much more severe problems; anything that can be done to block the problems that the entire society is facing is enormous.”

Following the video, Mr. Yehoshua Davis, one of the original board members of Madraigos, presented Rabbi Twerski with a beautiful piece of artwork emblazoned with the words of the Mishnah, “Eizehu chacham, haro’eh es hanolad — Who is wise? He who has foresight.”

The program continued with the “Ten-Year Video,” which detailed the past, present, and future vision of Madraigos. The video depicted 10 years ago when Rabbi Twerski, Mr. Shua Ray, Mr. Nachy Shabat and some others, met to confront a growing epidemic of struggling teens in the Chicago community.

These founders realized that they had to create an organization where kids could get help, based on clinical excellence. Since then, through prevention, enrichment, and intervention services, Madraigos has reached thousands of children throughout the community, in fifth through 12th grades.

Now, the organization is being given over to new leadership who can take it to the next level and into the future. Mr. Yoni Bellows and Mr. Josh Rosen will now be assuming leadership of the Madraigos Midwest.

At the conclusion of the video, Mr. Bellows and Mr. Rosen presented Mr. Ray and Mr. Shabat with beautiful artwork, with the maamar Chazal, “Kol hamekayem nefesh achas b’Yisrael, k’ilu kiyeim olam malei — Whoever saves or sustains one Jewish soul, it’s as though he has saved a whole world.” Mr. Ray addressed the gathering, encouraging all to get involved and help sustain the organization and help it grow.

Mr. Shabat thanked many of the people who helped Madraigos Midwest during its early years, and highlighted the crucial work that Madraigos does, including giving struggling teens a place of belonging and connection.

Mr. Yankie Greenberger, LCSW, clinical director of Madraigos, commented on the growth of Madraigos in the past ten years. “What started off as one small program has been transformed into a comprehensive organization that reaches the entire spectrum of the adolescent community in Chicago and their families.

“It is incredible to see our robust prevention program, our solid enrichment program, and intervention services that include a full-service counseling center.

“The future of Madraigos is brighter than ever with plans of expanding our enrichment programs and growing the Mozes and Helen Stern Counseling Center with the addition of a variety of groups, family work, and parenting workshops that will address the constantly changing trends adolescents are confronting.”