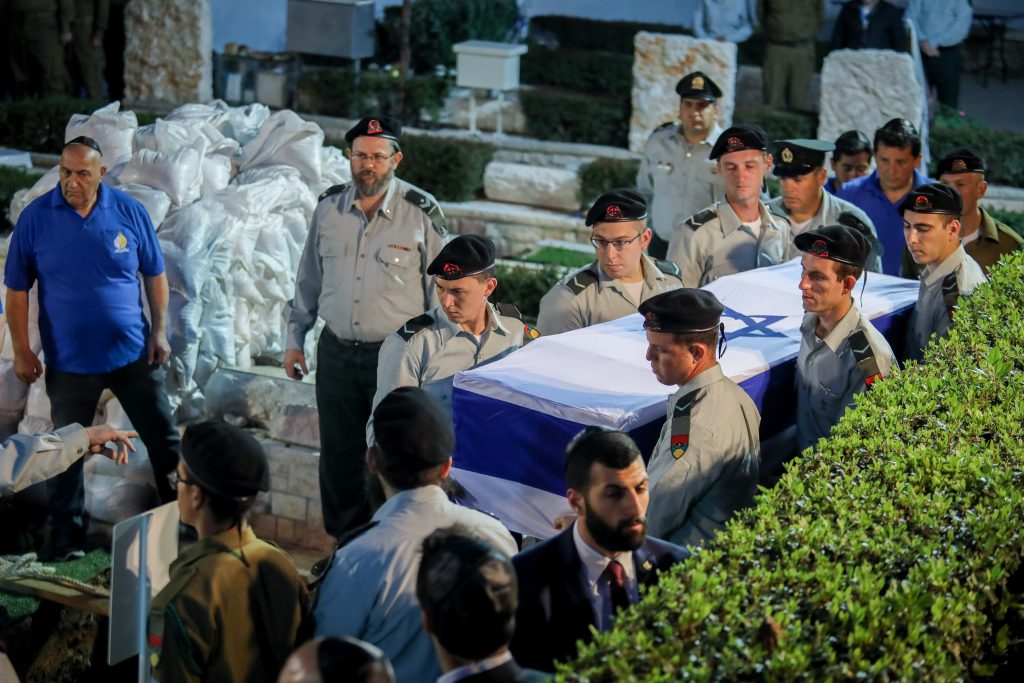 Thousands of people participated in the levayah for Zachary Baumel, Hy”d, at Mount Herzl Military Cemetery in Yerushalayim on Thursday evening, 37 years after he was killed in First Lebanon War.

Israeli Prime Minister Binyamin Netanyahu, President Reuven Rivlin, friends, family and senior officials from the IDF’s armored corps, in which Baumel served, were all in attendance.

“I remember Zachary as everyone who knew him remembers him – with his constant and warm smile. He was a friendly person and a true friend who always helped anyone who had difficulty in class, especially the American boys,” he was quoted saying by Arutz Sheva.

“He was a diligent student. I remember him sitting in the first row in front of the Aron Hakodesh, and one of the things he loved most about learning was Maimonides – The Guide for the Perplexed. For 37 years his smile has not left my mind. He had a great level of humility, a great degree of contentment and patience for people. Together with him we found brotherhood in the beit midrash.

“The need to risk their lives for our brothers in the north gave us all the feeling that we were one. Zachary, together with all the young men, left the beit midrash. I remember the bus ride that Sunday morning, and now after 37 years, my heart is just overflowing. Now, 37 years have passed and we have still not given up. Zachary came back to us. ‘And the sons return to their borders!'” Rabbi Medan said, quoting the navi Yirmiyahu while wiping a tear.

“I would like to thank the security forces. As a person who lives in Gush Etzion and experienced great difficulty in locating the bodies of 36 of the fighters [massacred on their way to try to save Gush Etzion in 1948] known as “The Lamed Heh,” we know what it means for corpses to be brought to their final resting place. ‘Give thanks to G-d for He is good!’ Again and again and again,” he concluded.

Osna Haberman, Baumel’s older sister, told The Jerusalem Post on Thursday about how she received the news:

She answered a knock on the door of her home in Yerushalayim. “I open the door and 10 people in uniform stood there – even the first time it was three,” she recalled.

After sitting down in the living room, they looked at her and said, “We came to tell you something.”

The gave her the amazing news, and then she left with the officers to go to her mother Miriam’s home. Her parents had carried on an international battle to find their son. Her father Yona, z”l, died a decade ago, and Miriam is now almost 90.

The army officers “assigned people to me to make sure that everyone knew. They had a list of the whole family. It was not so simple to get hold of everyone,” Osna said.

Later, on Wednesday night, she received a phone call from Prime Minister Netanyahu, and then went to his office with other family members.

Throughout the years the IDF had kept the family informed about rescue efforts, including secret developments which were not shared with the public.

Osna had been promised by Mossad director Yossi Cohen that “he would not rest” until her brother’s remains were returned.

“I felt that there was a lot behind his words,” she said. He seemed “genuine” and to “really care.”

The news the soldiers brought her Wednesday, she said, “was unreal.”

“My mind can’t grasp this. You brought news, but you didn’t give me something that I can grasp, that I can wrap my mind around. I couldn’t absorb it and I still haven’t.”