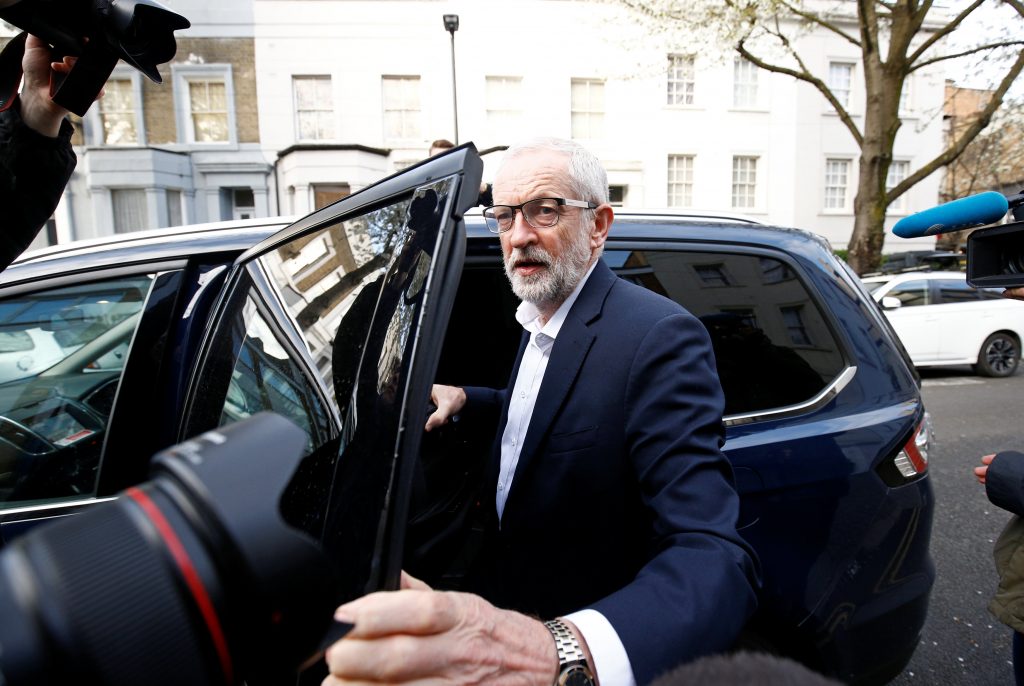 British Prime Minister Theresa May will meet opposition leader Jeremy Corbyn on Wednesday to thrash out a Brexit compromise, a gamble that could finally see a European Union divorce deal agreed but also tear her party apart.

After her EU withdrawal deal was rejected three times by lawmakers, with parliament and her Conservative Party hopelessly divided over Brexit, May said on Tuesday she would reach out to Corbyn in a bid to break the impasse.

The United Kingdom was supposed to leave the EU last Friday, but three years after Britons backed leaving the bloc in a referendum, it is still unclear how, when or even if it will do so.

May has been unable to persuade a hardcore euroskeptic group of her own lawmakers to back the divorce agreement she struck with the EU because they argued it did not provide a decisive break with Europe.

Her decision to seek another short delay to the current Brexit date of April 12 and turn instead for support from Labour, which wants to stay in a customs union with the EU, may make a “soft” Brexit more likely – one that keeps Britain’s economy closely aligned to the world’s biggest trading bloc.

Sterling rose on Wednesday over hopes for a “softer” Brexit, hitting its highest level since March 28.

“It is regrettable that what we have been saying for several months now is coming to pass, but that is the remorseless logic of not backing the prime minister’s deal.”

May’s decision to approach Corbyn, a veteran socialist deeply disliked by many Conservatives and mocked by May herself as unfit to govern, still leaves many questions unanswered.

She did not spell out how long a delay to Brexit she wanted, merely saying it should be “as short as possible and which ends when we pass a deal.” She has repeatedly said she did not want an extension which would see Britain having to take part in elections to the European Parliament on May 23.

European Council President Donald Tusk said the bloc should be patient with Britain as May tries to find a way forward but it was not certain how European leaders would view her request.

As it stands, Britain will still leave the EU on April 12 without a deal, something many Conservative lawmakers would like to happen but a scenario businesses fear could wreak chaos and cause huge economic damage.

A cross-party group of British lawmakers will try on Wednesday try to rush through legislation in parliament to make such an outcome impossible.

Ahead of their talks, May and Corbyn said there would be no preconditions, but the leaders might well struggle to find a compromise position that can satisfy their own parties.

The Conservatives have been divided over Europe for three decades, leading to the demise of three former prime ministers, David Cameron, John Major and Margaret Thatcher.

But Labour is far from united itself. Corbyn, who voted against joining the bloc in 1975, has previously set out a series of demands he wanted May to agree to before he would back her deal.

“Labour has put forward our proposals to ensure there is a customs union with the EU, access to vital markets and protections of our standards of consumer, environmental and workers’ rights,” he said on Tuesday.

However, many Labour supporters want the party to throw its weight behind a second referendum, while some Labour lawmakers, who represent areas that voted strongly to leave the EU, are fearful that they will be viewed as betraying such traditional voters if they do not strongly back Brexit.

“Having heard Barclay…it is clearly a trap designed to try to get May’s terrible deal through, which some people have fallen for, but Labour mustn’t,” he wrote on Twitter.

It is also unclear where May’s last-ditch attempt to get a Brexit deal through will ultimately leave her minority government.

She had already promised to step down if her withdrawal agreement was passed by parliament, although that failed to persuade all her lawmakers to back her, and her overture to Corbyn has alienated some Conservatives still further.

“She needs to take a long look in the mirror and for the good of our country, our democracy and the Conservative Party she needs to go now,” lawmaker Andrew Bridgen told Sky News.

The Democratic Unionist Party, the small Northern Irish party on whose support May relies on to govern, were also wary of her plans.

“It remains to be seen if sub-contracting out the future of Brexit to Jeremy Corbyn, someone whom the Conservatives have demonized for four years, will end happily,” the Democratic Unionist Party (DUP) said in a statement following May’s change of strategy.