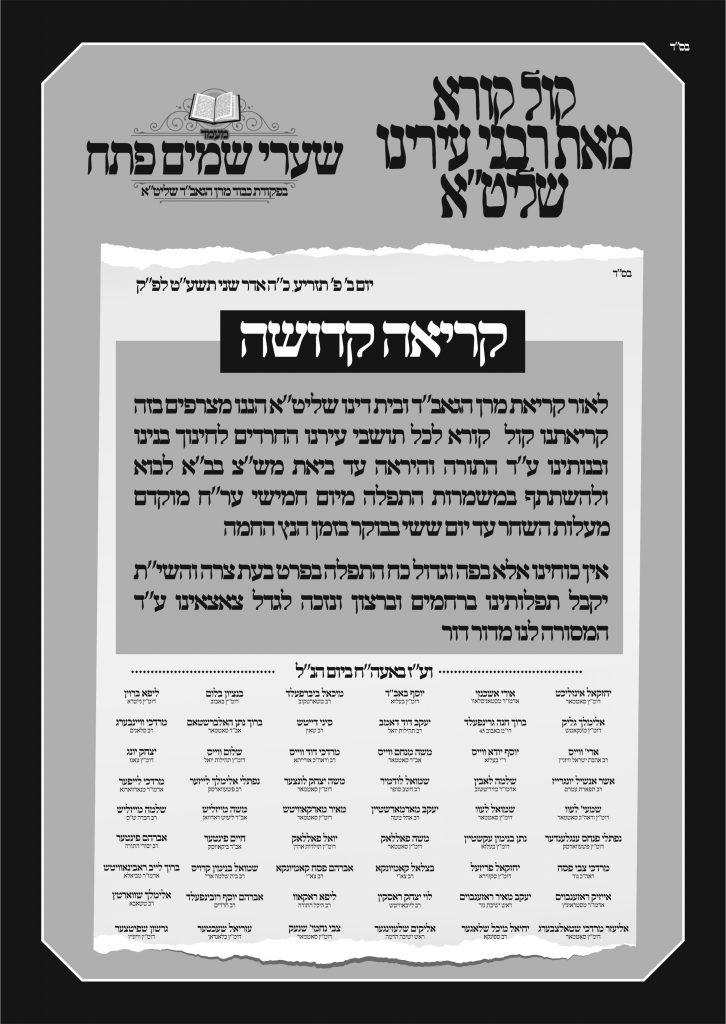 A call has gone out from Harav Ephraim Padwa, shlita, mara de’Asra of the Union of Orthodox Hebrew Congregations together with all the Rabbanim of North London for a community-wide Yom Tefillah to run this week for 26 hours around the clock, from early morning on Thursday until Friday morning.

Tehillim will be recited in the large Bobover Beis Medrash on Egerton Road throughout those 26 hours, to pray for the success of the askanim who are working so hard with the government and on different fronts, to find a way for chinuch institutions to be able to continue educating chareidi children without interference from the government.

Notices will publicize the set times when different groups will gather in Bobov for their own minyan, starting from 5 a.m. on Thursday. For example, there will be two hours set aside for talmidim from the local chadarim; another two hours for bachurim from the yeshivos ketanos; for the kollel yungeleit; for baalei batim and so on. The ezras nashim of the shul will also be open, and women and girls are called to participate.

Additionally, it was announced that Harav Padwa and the Viznitzer Rebbe, shlita, of London will each attend one shift, and other Rabbanim will take part in shifts throughout.

At a recent meeting with Harav Padwa, it was decided that a massive tefillah campaign was long overdue to awaken rachmei Shamayim in a matter that is on the forefront of chareidi parents’ mind in recent months and which is causing Rabbanim, askanim, and menahalim of mosdos haTorah sleepless nights. It is hoped that the tefillos will bring success to the incessant work of the devoted askanim.

Together may we merit to avert the spiritual dangers hovering over our community and continue to raise our children according to the demands of the Torah.