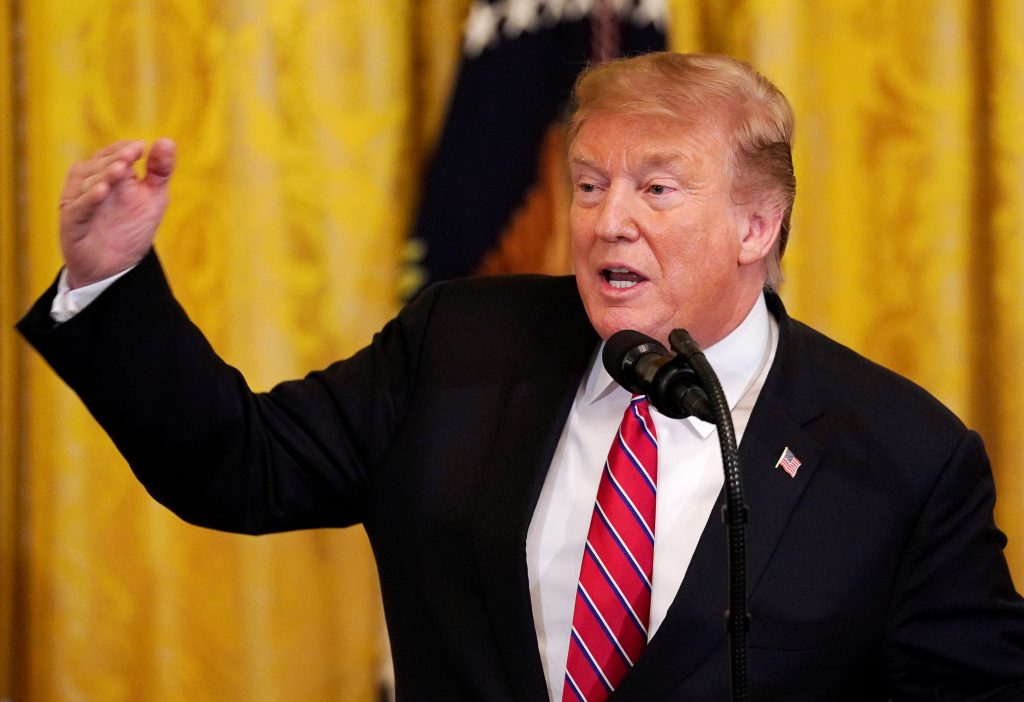 Passage of the First Step Act prison-reform bill is an “extraordinary bipartisan achievement,” but one that should be followed by a “second step” to expand on reforming the criminal justice system, President Donald Trump said Monday.

Speaking at a ceremony at the White House, Trump hailed the First Step Act as “landmark legislation [that] will give countless current and former prisoners a second chance at life and a new opportunity to contribute to their communities, their states, and their nations.”

The Act allows most nonviolent federal prisoners to earn significant time off their prison sentences by participating in constructive programs during their incarceration. It also allows the Bureau of Prisons discretion to release prisoners over 60 years old who have served two-thirds of their sentences, and increases time off for good behavior for all prisoners to 54 days per year, from the previous maximum of 47. In addition to these “back-end” reductions, it provides some “front-end” reforms, by reducing sentences for certain crimes, mostly drug-related.

For years, prison reform had faced congressional hurdles, as even those Republicans willing to allow back-end reductions were unwilling to support it on the front-end, and Democrats were adamant that any reform bill include front-end changes as well.

The compromise bill finally passed both houses of Congress last year, supported by large majorities of both parties, and was signed into law by Trump in December.

Monday’s event gave Trump an opportunity to tout the bill’s accomplishments, as he was joined in the East Room of the White House by several of the more than 500 people who have already been freed from prison under the bill’s over-60 provision, or under the bill’s expansion of the guidelines for compassionate release.

“So many people said … that criminal justice reform would never pass. But we came together as a group, we worked across party lines, and we got it done,” said the president. “The more I met and spoke with those involved in our criminal justice system, the more clear it became that unfair sentencing rules were contributing to the cycle of poverty and crime like really nothing else before. It was time to fix this broken system – and it’s a system of the past – and to improve the lives of so many people.”

“Two months ago, I was in a prison cell and [now] I’m in the White House,” exclaimed Gregory Allen, one of the newly released prisoners. “That’s going to tell you to make America great again!”

Troy Powell, freed in February after serving 15 years of a 20-year sentence for a drug offense, thanked the elected officials who passed the bill and the organizations that lobbied for it, but said “there’s more that can be done.”

“I left so many people behind in prison doing 40 and 50 years for nothing,” said Allen. “I mean, should I have went to prison? Absolutely. I committed a crime. But for 20 years for the small things that I had done?”

“I think there should be a ‘Second Step,’ that’s what I say.”

Indeed, Trump announced Monday the kickoff of a new bill, which he referred to as the Second Step Act and Second Chance Act, and which he said will focus on finding employment for and successfully reintegrating newly released prisoners into society. He also said that, to “recognize the dignity and the potential of every American,” he has “designated April as the ‘Second Chance Month.’”

Before the celebration event, the White House hosted a “Prison Reform Summit” Monday afternoon, at which lawmakers, organizations and their lobbyists met with administration officials to discuss a framework for the Second Step Act. A source familiar with the meetings told Hamodia that issues discussed included re-entry assistance, such as by funding job training, and reducing obstacles for felons to obtain driver’s licenses and occupational licenses.

Supporters have hailed the bill’s passage, both on its own merits and as a victory for bipartisanship.

“It’s been a long journey to this stage – ten years for me when it comes to criminal-justice reform,” Sen. Richard Durbin (D-Ill.), the second-highest ranking Senate Democrat, told Hamodia. “I’m just happy for these men and women to have another chance at life.”

Van Jones, a liberal political activist and media personality, whose #cut50 organization strongly supported the First Step Act, told Hamodia that he “will work with or against any political party or politician to help people behind bars.”

“The one place where we have to put people first is on this issue, because Democrats and Republicans passed these bad [criminalization] bills … Both parties got us in this ditch, we need both parties to get us out. And so on this issue, I’ll work for anybody or against anybody,” said Jones, who admitted that he disagrees with Trump “on 99 percent of things.”

A large contingent of Orthodox Jews attended Monday’s celebration. Led by Rabbi Moshe Margaretten of Monsey, New York, one of the primary initiators of the bill, the group was among the most forceful activists and funders of the years-long lobbying effort.

“After spending so many years in Washington to advocate for this bill, running from office to office, debating this or that provision, it is great to be here today not to work, but to Baruch Hashem celebrate an achievement,” Margaretten told Hamodia. “Celebrating both the passage of the bill, and that prisoners have already been reunited with their families.”

Gary Apfel, who served as lead attorney for Shalom Mordechai Rubashkin and then dedicated his practice to pro-bono advocacy for prisoners and prison reform, said, “It was gratifying to see these people who have been released – the tangible effects of our bill, the lives changed for the better.”