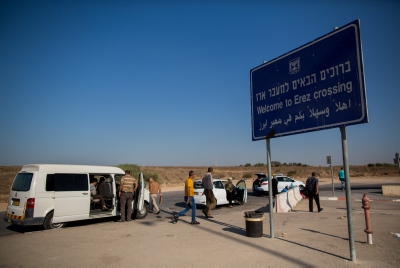 Israel reopened the Erez and Kerem Shalom crossings into Gaza Sunday – and on Monday, members of the Otzma Yehudit party, led by attorney and prospective MK Itamar Ben-Gvir, protested that opening by blocking the road into Gaza at the Kerem Shalom crossing, holding up hundreds of trucks waiting on line to pass through the crossings.

At one point, an irate driver jumped out of a truck, wielding a knife, and attempted to stab protesters. The driver later claimed that the protesters tried to beat him with metal rods. Speaking at the protest, Ben-Gvir said that the attack was a serious matter. “We demand that justice be done in this case. We came here to protest the opening of the passages into Gaza, which is a mark of shame for Israel” after the weekend attacks and rioting by Hamas. After the election “we will demand that if there is no calm for Israelis, there will be no calm for Gazans.”

The checkpoints were opened as part of informal understandings between Israel and Hamas, negotiated by Egyptian go-betweens, that lowered the high level of tension that had been extant at the border over the weekend. As part of those understandings, Israel on Monday expanded the range that Gaza fishermen could cover to 15 kilometers off the coast, more than doubling the area they could fish. The IDF said it would not allow any deviation from the permitted area and would deal “immediately” with violators.

On Sunday night, riots continued at the Gaza border, although on a smaller scale than had taken place over the weekend. Several rioters attempted to breach the Gaza security fence. IDF soldiers shot at the rioters, injuring at least one, Gaza sources said.