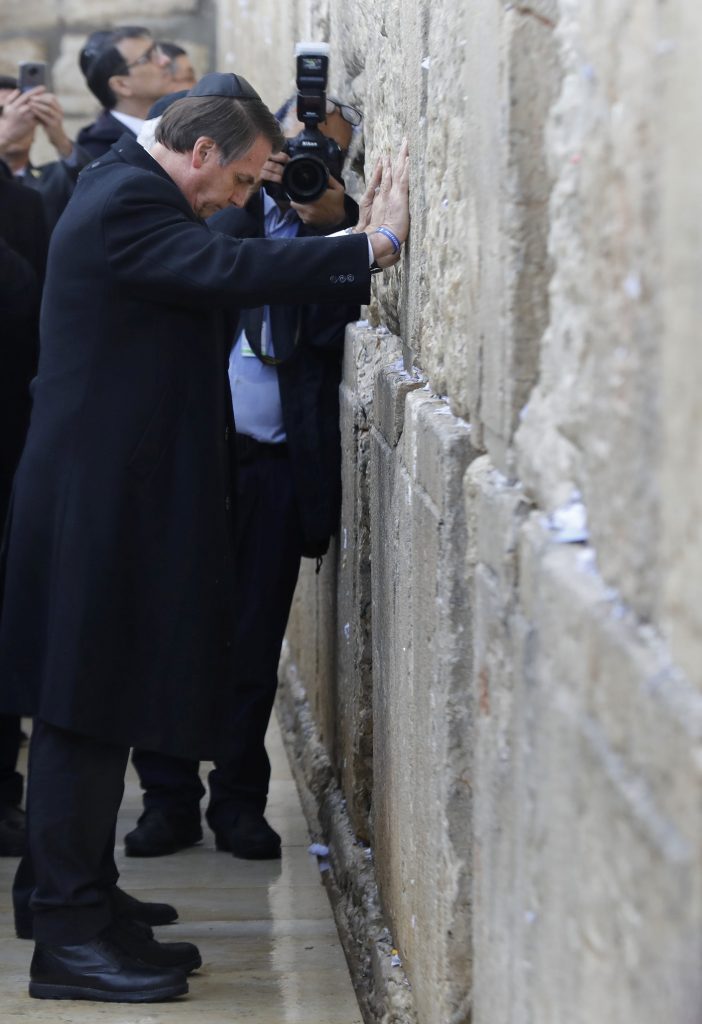 With Prime Minister Binyamin Netanyahu at his side, Brazilian President Jair Bolsonaro became the first foreign head of state to visit the Kosel with a senior Israeli official.

Others world leaders, including U.S. President Donald Trump and Barack Obama, have visited Judaism’s holiest place, but they made their visits on their own, personal stops on the itinerary.

Going to the Kosel with an Israeli leader could be interpretated as a tacit recognition of Israeli sovereignty over the site, a matter of international dispute.

Rav of the Kosel Rabbi Shmuel Rabinovitch recited from Tehilim, Chapters 121 and 122, and provided the distinguished guest with a detailed explanation of the importance of the Kosel to the Jewish people and its profound connection to the site throughout its history.

Then Netanyahu and Bolsonaro approached the wall. After the Brazilian president placed a note in one of the cracks, they leaned against the ancient stones for several seconds in quiet contemplation, according to The Times of Israel.

Netanyahu and the CEO of the Kosel Heritage Center, Mordechai Eliav, conducted Bolsonaro on a tour of the Kosel tunnels, examined a new model of the Second Bais Hamikdash along with a video that illustrated the historical longing of the Jewish people for a return to Yerushalayim. He was then shown artifacts from the First Bais Hamikdash at Wilson’s Arch.

Bolsonaro said that he was very moved by the visit. He mentioned that he had been to the Kosel before, but this was the first time he had seen the tunnels and the first time he understood what the site means to the Jewish people.

Israeli Prime Minister Binyamin Netanyahu said that “I am moved every time I come here. The Kotel is the heart of the Jewish people.”

At the close of his visit, the Brazilian leader wrote in the official guest book: “I believe in G-d.”

The Brazilian leader also visited a Christian site in the Old City of Yerushalayim on Sunday.

Meanwhile, Greenpeace activists rappelled down the Old City walls, where they let down banners to protest the destruction of Amazonian rainforests in Brazil.

“We will remind the president of the importance of the Amazon at all times, without rest,” said Marcio Astrini, public policy coordinator for Greenpeace Brazil in a statement. “An area corresponding to the size of two soccer fields of the Brazilian Amazon forest is deforested every minute. This is unacceptable and must have an end.”

Bolsonaro has pledged to expand areas of development in the region, putting him at odds with Greenpeace and other activists.