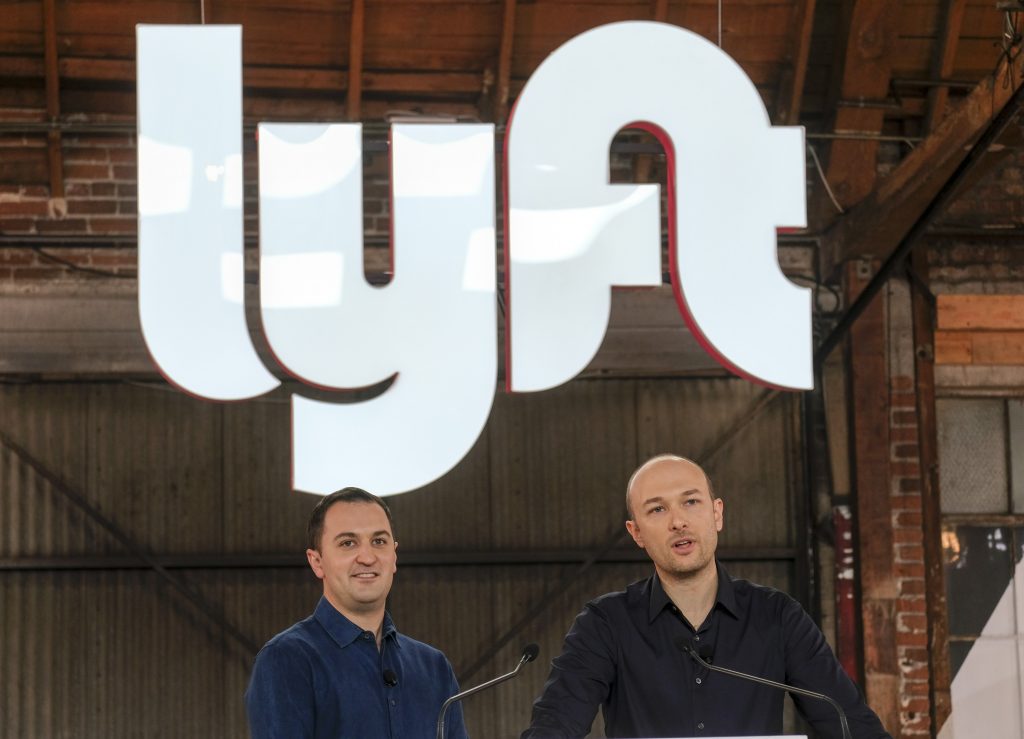 Lyft’s shares soared as the company went public Friday, giving investors their first chance to bet on the future of the ride-hailing industry.

Investors embraced Lyft despite an uninterrupted history of losses totaling nearly $3 billion since its 2012 inception on the premise that its growing popularity will pay off in the long run. The company has lured new riders and taken market share from Uber — and now it’s beaten its larger rival in the race to sell shares to the public.

Still, Lyft’s path to profitability is uncertain, and it’s under pressure to keep prices low as it competes for customers with Uber and traditional taxi companies. Both Uber and Lyft are relying on the eventual deployment of autonomous vehicles to help them reduce the cost of paying drivers, although deployment on a large scale could be many years away.

Not even one of Lyft’s own drivers who exercised an option to use a $1,000 bonus awarded as part of its IPO to buy stock is convinced the San Francisco company will ever make money.

“I just can’t see how they will do it,” said Jay Cradeur, who has been driving for Lyft since 2015. “They could increase revenue by charging more, but that won’t be a good thing for passengers, or they could cut the fares for drivers, but that will cause drivers to quit and degrade the service.” Cradeur, who also drives for Uber, plans to sell his Lyft shares if and when the stock hits $100.

The IPO represents a watershed moment for ride hailing, an industry hatched from the rise of smartphones. Now that both Lyft and Uber have made it easy to summon a ride, more people are already starting to wonder if owning their own cars will make sense in the future.

“This is a pat on the back for ride hailing as a category,” said Rohit Kulkarni, senior vice president of research at Forge.

Lyft’s debut is the first of several high-profile IPOs expected to emerge this year from the technology industry, a sector that has helped propel the stock market in recent years. Others already in the pipeline include Lyft’s bigger rival, Uber, and video conferencing service Zoom, with room rental service Airbnb looming as a possibility, too.

Co-founders Logan Green and John Zimmer talked about their early vision of the company and their commitment to providing alternatives to individual car ownership, at an event in Los Angeles, where executives celebrated Lyft’s market debut.

“In those early days we were told we were crazy to think people would ride in each others’ personal vehicles,” said Green, who is also the CEO.

Based in San Francisco, Lyft had 1.9 million drivers and 30.7 million riders in 2018, operating in 300 markets in the U.S. and Canada. Lyft doubled its revenue last year to nearly $2.2 billion — another feat that likely lured investors to the IPO.

Uber was first out of the gate when it launched a black car taxi service in 2009. Lyft launched later in 2012, and was the first of the two to set up peer-to-peer ride hailing, where riders use the app to connect with drivers who pick them up in their own personal vehicles. Uber later added peer-to-peer ride haling to its app.

Lyft’s U.S. market share has expanded from 22 percent in 2016 to 39 percent last year as Uber slogged through allegations that it stole self-driving technology and other mortifying issues, prompting a consumer backlash.

Meanwhile, Lyft parlayed a warm and fuzzy image that it used to cultivate by adorning drivers’ cars with a fluffy pink mustache to position its brand as the more socially responsible of the two ride-hailing rivals.

Lyft has focused on its mission of getting people to give up their personal cars in favor of ride-hailing, shared bikes and scooters, and has remained in North America. By contrast, Uber has expanded overseas and is experimenting with food delivery, boats and freight operations.

Lyft’s IPO raised more than $2 billion for it to use in its heated rivalry with Uber to woo riders. Uber is expected to go public later this spring and aim for a market value of $120 billion, even though it also remains unprofitable, with a loss of $865 million in its last quarter (compared to Lyft’s $249 million loss last quarter).

“Lyft is popping the Dom Perignon today but how the stock trades over the coming months and especially once Uber comes out and goes public will be the real test,” said Wedbush Securities analysts Daniel Ives.

Co-founder Zimmer sounded upbeat. “We know the road ahead comes with both massive opportunities and genuine challenges,” he said.

Despite Lyft’s recent inroads, there is still no guarantee the company will become profitable — a risk flagged in its own regulatory filings leading up to the IPO. Developing autonomous vehicles is key to reducing driver costs, and Lyft is behind competitors such as Google spin-off Waymo, which has begun testing a ride-hailing service using its robotic minivans in the Phoenix area.

Experts say it could be many years before autonomous vehicles are deployed on a large scale. And cutting costs by reducing pay to drivers also could prove difficult.

Even so, Lyft’s revenue per ride has been increasing, so some analysts see the company as headed in the right direction.

Green and Zimmer have structured the shares so that together they will hold 49 percent of the voting power, enough to substantially influence major decisions. They also hit the biggest jackpots in the IPO. Green, 35, owns a stake now worth $656 million and Zimmer, 34, owns a stake worth $452 million.

Lyft said Friday it will invest $50 million annually, or 1 percent of profits — whichever is greater — in transportation initiatives in cities. The investments will include free or discounted rides for medical patients and low-income seniors, and developing infrastructure for bikes, scooters and transit.