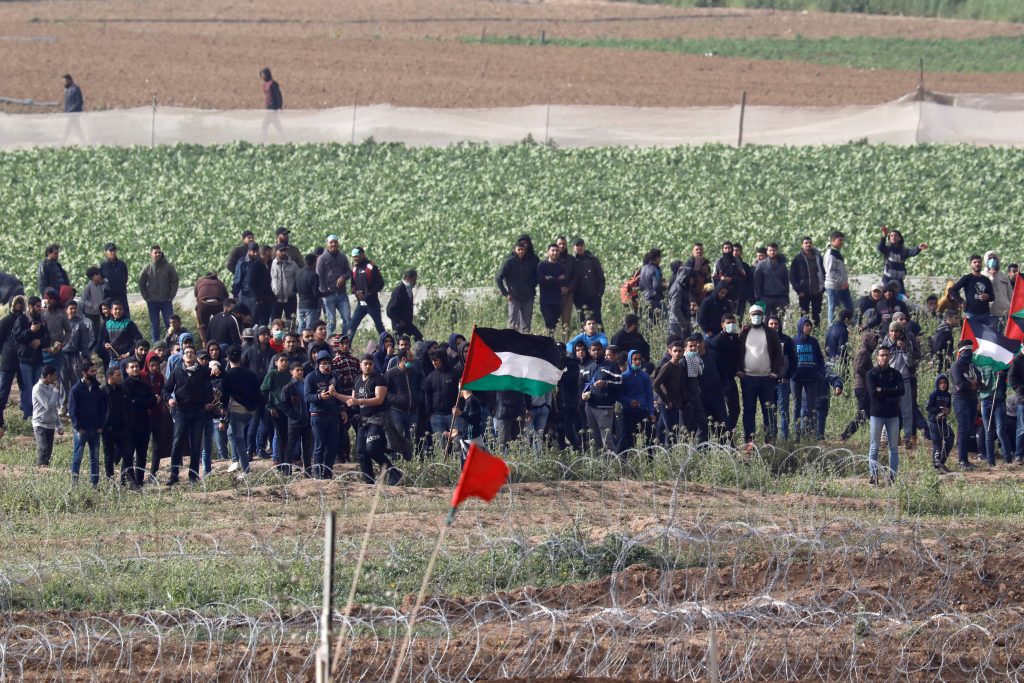 Some 40,000 Gaza Arabs rioted along the security fence Shabbos, but the IDF termed the situation “manageable,” as Hamas terrorist commandos kept rioters away from the fence itself. The “orderly” riot was a prelude to an official agreement that will be signed with Israel in the coming days, Hamas said.

Hamas had prepared for a major riot on Shabbos, marking the first anniversary of Hamas’s “marches of return,” the weekly rioting at the Gaza border, as well as Land Day, another event that generates a great deal of unrest in Gaza and among Arabs in Yehudah and Shomron. The IDF deployed large numbers of soldiers, tanks and armored vehicles at the border, raising the security alert in the region and deploying Iron Dome batteries in the center of the country, in case Hamas decided to shoot rockets at central Israel, as it did several times in recent weeks.

IDF forces hit a Hamas position Friday night after Hamas terrorists threw hundreds of firebombs at the security fence. On Shabbos, Egyptian negotiators were seen among the rioters, urging calm. Also present at the riots were Hamas heads Yahya Sinwar and Ismail Haniyeh, also ostensibly to urge calm, Kan News said. While there were numerous incidents of rock-throwing and firebomb attacks – with the IDF responding with anti-riot measures – the IDF saw Shabbos’s events as a sign that its policy of deterrence was working, said IDF spokesperson Ronen Manulis.

“There were fewer rioters at the border than expected, and those that did reach the fence faced off against Hamas special guards, who kept things under control. The dialogue the IDF had with sources in Gaza, including the Egyptians, enabled things to proceed in an intelligent manner. It appears that there was only one spot on the fence that Palestinians breached, and they immediately returned to Gaza. This has been happening every Friday for the past year. We can say that Land Day ended successfully, but we have other challenges in the near future. We will not allow the nightly loud explosions that have been coming from Gaza. This is something they do to interfere with the lives of Israelis, and to pressure our officials to make concessions,” Manulis said.

Meanwhile, Hamas claimed that an agreement with Israel was near. Arab media on Motzoei Shabbos quoted deputy Hamas chief Salah al-Aruri as saying that “the agreement is not a peace deal or accommodation with the occupiers. It does not mean that we are at peace. But there are signs that we will reach an agreement on calm in the coming days.”

The government had no comment on the possibility of such an agreement, but New Right MKs and government ministers Naftali Bennett and Ayelet Shaked said that if such an agreement does come up for a government vote, they would vote against it. “The feeling among Israelis is one of degradation, and that is not by chance,” said Bennett. “Sinwar and Haniyeh were parading among the rioters as if they were at a victory celebration, without fear that Israel will eliminate them. There is no deterrence. Minister Shaked and I will vote against this in the Cabinet; it is a document of surrender to Hamas. After firing 1,000 rockets at us, sending tens of thousands of terror balloons, and sending a million Israelis to bomb shelters, Sinwar should be removed from the world, not parading around like a proud peacock. Those who think we have ‘bought the peace’ are mistaken, because surrender to terror only whets the appetite for more terror. We can expect another round of terror, much more violent than the previous ones.”