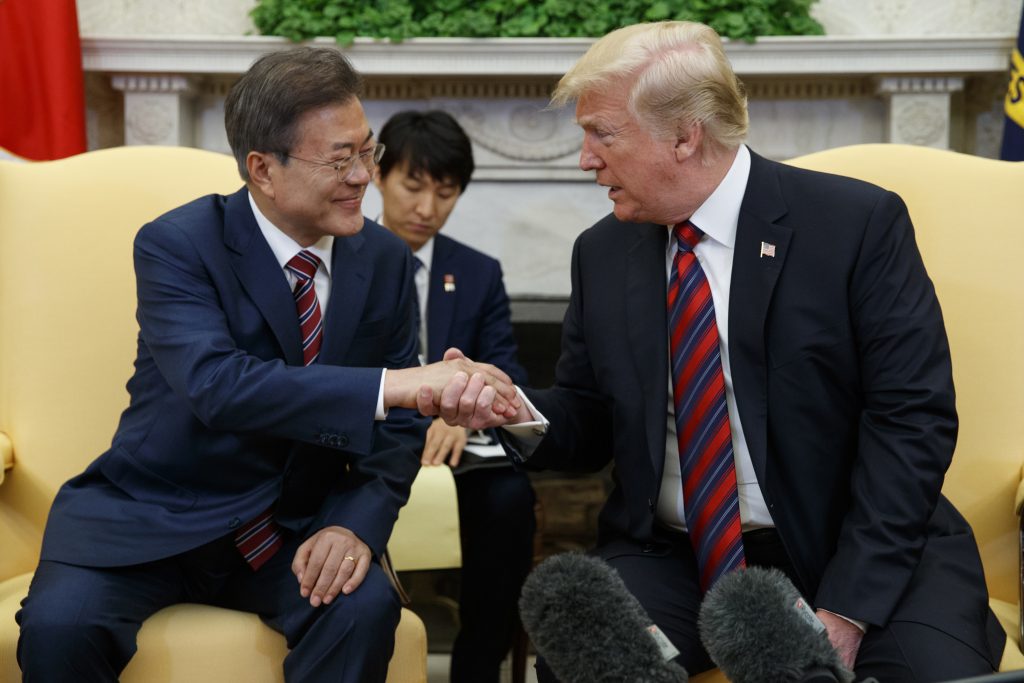 It would be their first meeting since Trump’s second summit with North Korean leader Kim Jong Un in Hanoi last month collapsed due to disputes on U.S.-led sanctions. The breakdown of that summit put Moon, a liberal who has shuttled between Washington and Pyongyang, in a difficult position on how to further engage North Korea and facilitate the nuclear diplomacy.

Moon’s office said Moon will visit the United States on April 10-11 to discuss how to strengthen their countries’ alliance and achieve North Korea’s complete denuclearization and peace on the Korean Peninsula.

The White House said Trump and first lady Melania Trump will welcome Moon and his wife Kim Jung-sook to the White House on April 11. It said in a statement the alliance between the U.S. and South Korea “remains the linchpin of peace and security on the Korean Peninsula and in the region.”

Earlier this month, North Korean Vice Foreign Minister Choe Son Hui threatened to pull out of the nuclear negotiations with the United States citing a lack of its corresponding steps to match some disarmament measures North Korea took last year. She said Kim would soon decide whether to continue the talks and his moratorium on nuclear and missile tests.

South Korea’s spy agency told lawmakers in a private briefing Friday that North Korea has nearly completed its work to restore a long-range rocket launch facility that it had partially dismantled last year at the beginning of the nuclear diplomacy, according to Kim Min-ki, one of the lawmakers who attended the meeting.

The lawmaker also cited the National Intelligence Service as saying the North’s uranium-enrichment facility at its main nuclear complex remains operational. The NIS said it doesn’t comment on intelligence assessments provided to lawmakers.

Citing analyses of commercial satellite imagery, many civilian experts in the U.S. have previously given similar assessments on the North’s Tongchang-ri launch facility and the Yongbyon nuclear complex. But there have been no reports that North Korea is preparing for a long-range rocket launch or a nuclear test anytime soon.

Moon’s push to expand ties with North Korea and resume dormant inter-Korean economic projects is in doubt as U.S. officials maintain that sanctions on North Korea would stay in place unless the country takes significant denuclearization steps.

North Korea recently withdrew its entire staff at a frontline liaison office with South Korea before sending some of them back to the office. Seoul’s Defense Ministry said Friday that North Korea hasn’t responded to its offer 11 days ago to hold military talks to discuss planned joint searches for Korean War dead at their border area.

Also Friday, South Korea received the first two of the 40 F-35A fighter jets that it has agreed to buy from Lockheed Martin by 2021. The F-35A jets that arrived at an airport in southern South Korea have become the country’s first stealth fighter jets. North Korea has previously called the introduction of F-35A aircraft a plot by Seoul to attack North Korea.

Some experts say North Korea still hopes to keep diplomacy with the United States alive because it is desperate to win sanctions relief to revive its trouble economy.

In a possible reflection of its resolve to press ahead with its engagement policy on North Korea, South Korea’s Unification Ministry on Friday reiterated its position that it will push to hold a regular summit with North Korea and realize Kim’s promise to travel to Seoul.