New Yorkers Not Amused By Man Who Sliced Bagels Like Bread 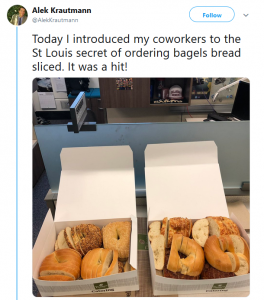 A Midwest man who brought his coworkers bagels sliced like bread is getting an earful from New Yorkers and social media.

Alex Krautmann on Monday tweeted a photo of his Panera purchase and called the vertical slices “the St. Louis secret,” which he said “was a hit” with his coworkers. Krautmann pointed out that it creates more slices and more surface area for cream cheese, and that the few remaining slices make nice bagel chips with hummus.

The NYPD’s chief of detectives, Dermot Shea, thanked posters for reporting “this crime,” and said it would never happen in New York.

Panera told Krautmann the bagels “are on us” next time and they’ll be sliced however he’d like.