National Native American Vets Getting a Memorial in Washington
National 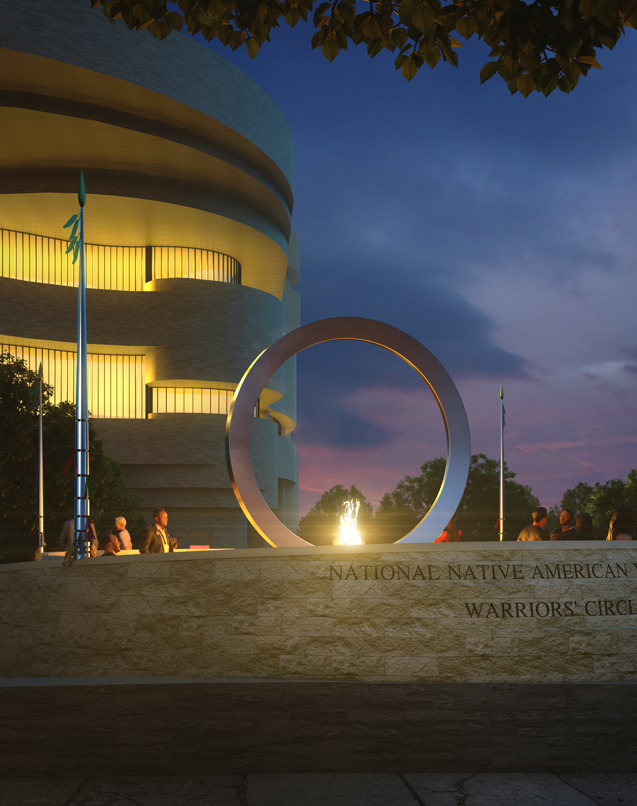 A $15 million memorial will open next year in Washington to honor Native American military service members and veterans, more than two decades after planning began.

The steel and stone structure, called the “Warriors’ Circle of Honor,” will be built outside the Smithsonian’s National Museum of the American Indian on the Mall. The memorial will honor the more than 156,000 active military service members and veterans who are Native Americans and Alaska Natives.

The memorial will honor the more than 156,000 active military service members and veterans who are Native Americans and Alaska Natives.

Plans for a memorial to Native American service members have been in the works for years and design details are still being finalized. A groundbreaking ceremony is set for September, followed by a dedication on Veterans Day in November 2020, when the memorial will open to the public.

Veterans and tribal leaders said a memorial dedicated to Native Americans’ contributions dating to the Revolutionary War is long overdue. Clifford Takawana, of Fletcher, Oklohoma, who served three tours in Vietnam, said the memorial will ensure the service of Native Americans isn’t forgotten.

“When we go to D.C., we go to the World War I and World War II memorials and to the Korean War Memorial,” said Takawana, who also is secretary of the Comanche Indian Veterans Association. “There’s nothing that gives tribute to Native Americans’ service to this country, until now.”

Congress passed legislation in 1994 mandating a memorial be built at the National Museum of the American Indian, which opened 10 years later, but it didn’t allow the museum to raise money for it. In 2013, new legislation allowed fundraising to begin.

In the past year, the museum has raised $7.6 million from private donors and Native American tribes to fund the memorial.

“The idea was to honor the long tradition of service among Native Americans in the armed forces,” said Rebecca Trautmann, the museum’s curator for the memorial. “Most Americans don’t realize that Native Americans have served since the Revolutionary War and in every major war at a high rate.”

Harvey Pratt, a Cheyenne and Arapaho, was selected to design the memorial after a nationwide competition. Pratt, who served three years in Vietnam as a Marine and is a traditional Peace Chief — the Cheyenne Nation’s highest honor — said the memorial is meant to be a place of “gathering, remembrance, healing and reflection.”

The “Warriors’ Circle of Honor” will be a 12-foot tall, stainless steel circle balanced on a carved, stone drum.

A flame can be lit for ceremonies, while four lances will be placed around the edges of the memorial to allow veterans, family members and tribal leaders to tie cloths for prayers and healing — a Native American tradition.

For some, the military was a way to honor generations of Native American service members in their tribes. For others, it was a stable career path or a chance to follow in the footsteps of grandfathers, fathers, mothers, brothers, aunts or uncles.

“Natives have long stepped up to serve their country. It goes back before there was a United States,” Takawana said. “We’ve had to be warriors to defend our homeland, whether it was defending our hunting grounds from other tribes or from when nonwhites came in.”

For Native Americans, the decision to serve came as they saw their tribal governments defend their sovereign nation status against the federal government, while simultaneously being on the front lines helping to defend the country.

Museum officials said they spoke to about 1,200 veterans and tribal leaders in forums across the country while planning the memorial. Kevin Gover, who is a Pawnee and director of the American Indian museum, said he learned through information sessions with tribal leaders of the commitment Native Americans have to the “well-being of the U.S.”

“They are perfectly aware that they are serving a country that had not kept its commitments to Indians, and yet they chose — and are still choosing — to serve,” he said, adding that it “reflects a very deep kind of patriotism.”

Chuck Boers, a Lipan Apache war chief who served in Iraq as an Army combat photographer, said his family has a long tradition of military service.

He had two, great- great-great uncles who served as Apache Scouts, and a great- great-great grandfather who was a scout for the Texas Rangers. They served during the Apache Wars in the mid-1800s and often translated for whites and Apaches.

Boers, an advisory committee member for the memorial, served 26 years in the Army and received three Purple Hearts and two Bronze Stars. Growing up, he said he would hear stories of relatives in the military and ask his family, “why do we serve?”

He was taught a lesson.

“This was our home and we need to defend our home as well as our way of life,” Boers said. “We had to prove and show that we are part of this nation, the U.S., because it is our community and land that we are defending.”