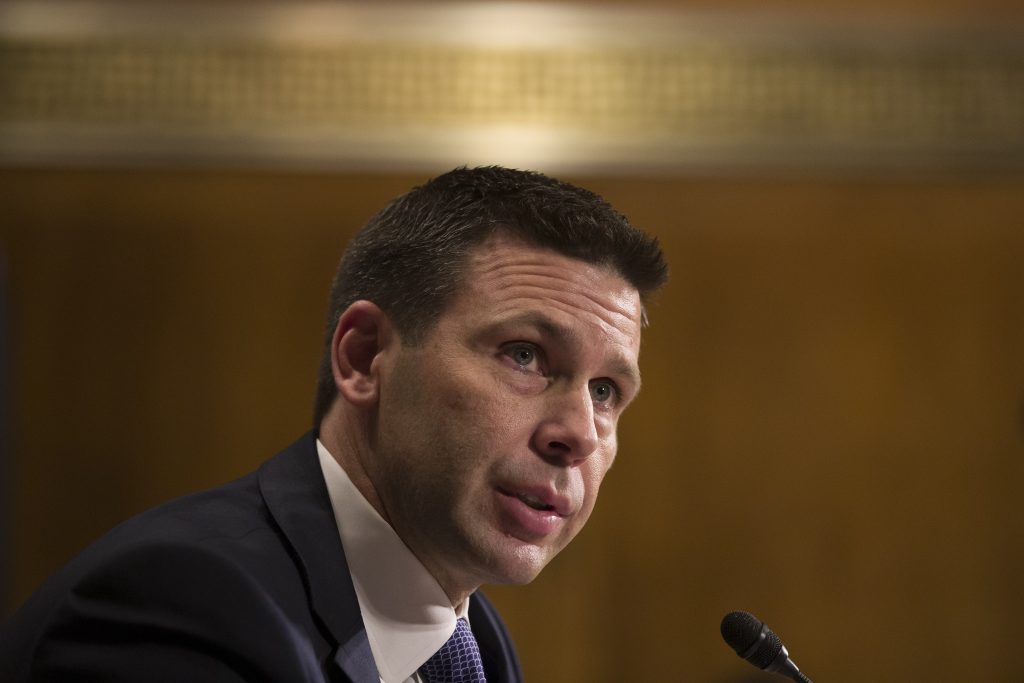 Outside a Border Patrol station overflowing with Central American families, the top U.S. border security official made an urgent appeal to lawmakers Wednesday for more resources and authorities, warning of an unprecedented migration surge that has pushed his agency to “the breaking point.”

Kevin McAleenan, the commissioner of U.S. Customs and Border Protection, gathered reporters and television cameras near an improvised holding pen beneath an overpass where U.S. agents have been processing hundreds of parents and children in a dusty parking lot. He said he has warned Congress of the unfolding chaos and called for immediate action to “address this broken framework.”

“That breaking point has arrived this week at our border,” he said. “CBP is facing an unprecedented humanitarian and border security crisis all along our southwest border and nowhere has that crisis manifested more acutely than here in El Paso.”

Just before the commissioner began speaking, a group of nine parents and children from El Salvador and Panama traversed the Rio Grande, and agents led them to the processing center on foot.

McAleenan’s statements reflect the growing desperation among Homeland Security officials faced with a border influx that is on pace to be the largest in more than a decade, led by Guatemalan and Honduran asylum seekers who arrive with children and surrender to U.S. agents. McAleenan said his agency currently has 12,000 migrants in its custody.

“A high number is 4,000,” he said. “Six thousand is crisis level. Twelve thousand is unprecedented.”

McAleenan said Border Patrol holding stations are so dangerously overcrowded that CBP is releasing migrants directly into the United States for the first time in more than a decade.

Some have been seriously ill, including infants with 105 degree fevers, a two-year-old suffering seizures in the desert, a 19-year-old woman with a congenital heart defect who needs emergency surgery and a 40-year-old man suffering multi-organ failure. Others have lice, the flu, and chickenpox.

“We are doing everything we can to simply avoid a tragedy in a CBP facility,” McAleenan said. “But with these numbers, with the types of illnesses we’re seeing at the border, I fear that it’s just a matter of time.”

He blamed the surge on smugglers and U.S. laws that he said encourage illegal migration because migrants are virtually guaranteed to be released in the United States.

“There’s no questioning why this is happening,” he said.

Thousands more Central Americans are waiting in Mexico, at shelters in Ciudad Juarez, and U.S. officials believe they likely will cross the river in coming days and weeks.

Though Border Patrol apprehensions remain below their annual peak of 1.6 million in 2000, the nature of the increasing migration flows has shifted dramatically, and that shift is driving the alarm. In prior eras, most of the migrants were adult men who could be easily deported to Mexico; now, many of those attempting to cross the border are asylum-seeking Central American families and, to a lesser degree, minors traveling on their own. Because those seeking asylum have a legal right to have their cases evaluated, most families are released into the United States to await hearings in clogged immigration courts, a process that can take months or years.

President Donald Trump has cited the immigration surge to bolster his push for a border wall. The migrants arriving here are crossing the Rio Grande, arriving in place where the United States already has formidable, modern border barriers. By surrendering to agents on U.S. soil — the strip of land between the river and the tall U.S. fencing — the migrants can assert their legal right to seek asylum.

Border Patrol holding cells in the Rio Grande Valley of South Texas also are overcrowded, as are facilities in Arizona, where large groups of Guatemalan families have been arriving at remote desert areas to surrender, Border Patrol officials said.

The most dangerous overcrowding is here in the El Paso area, where Border Patrol stations are at 300 percent to 400 percent capacity, leaving families in cramped, unsanitary holding cells with little or no access to hot food and showers.

Most parents who arrive with a child are issued an appointment with an immigration judge. But agents are so overwhelmed by the volume that they often are doing little more than a cursory screening, officials said.

Some families say they have been left for a week or more in dismal conditions, though CBP officials says the average length of stay is fewer than three days. In December, two Guatemalan children died after being taken into CBP custody amid widespread outbreaks of flu and other illnesses. State medical examiners have yet to release the autopsy reports in those cases.

The border security compromise Democrats reached with Trump last month includes $415 million to improve medical care and detention conditions for families and children in U.S. custody, including the construction of a new child-appropriate processing center in El Paso. But that facility is not likely to open for at least six months, CBP officials say.

In the meantime, the number of migrants crossing the border to turn themselves in has continued to soar. The agency detained more than 3,700 migrants on Monday, the highest one-day total at the border in a decade.

U.S. authorities detained more than 76,000 in February, and this month, they are on pace to exceed 95,000, according to the CBP projections.

Department of Homeland Security Secretary Kirstjen Nielsen met with senior Mexican officials in Miami on Tuesday for unannounced talks, telling her counterparts that cross-border trade and commerce are likely to suffer as more CBP officers are pulled away to cope with the migration surge.

CBP is preparing to temporarily reassign 750 blue-uniformed officers from its Office of Field Operations to help the Border Patrol, according to a senior DHS official, and Nielsen told Mexican interior minister Olga Sanchez Cordero that move likely will produce longer wait times for trucks and vehicles seeking to cross.

“Secretary Nielsen said very bluntly that if we didn’t work jointly, our resources are pulled away, and that creates problems for us and on the Mexican side in terms of facilitating commerce, and we want to avoid that,” said the senior DHS official, who spoke on the condition of anonymity to discuss sensitive negotiations.

Nielsen also is readying a plan to ask volunteers from the U.S. Coast Guard, Transportation Security Administration and other Homeland Security agencies to go to the border to help with the flood of Central American families, the official said, adding: “We are burning red hot right now, and we are looking everywhere for help.”

Nielsen arrived in Honduras on Tuesday for meetings with Central American leaders aimed at increasing efforts to deter migration to the United States and to crack down on smuggling organizations.