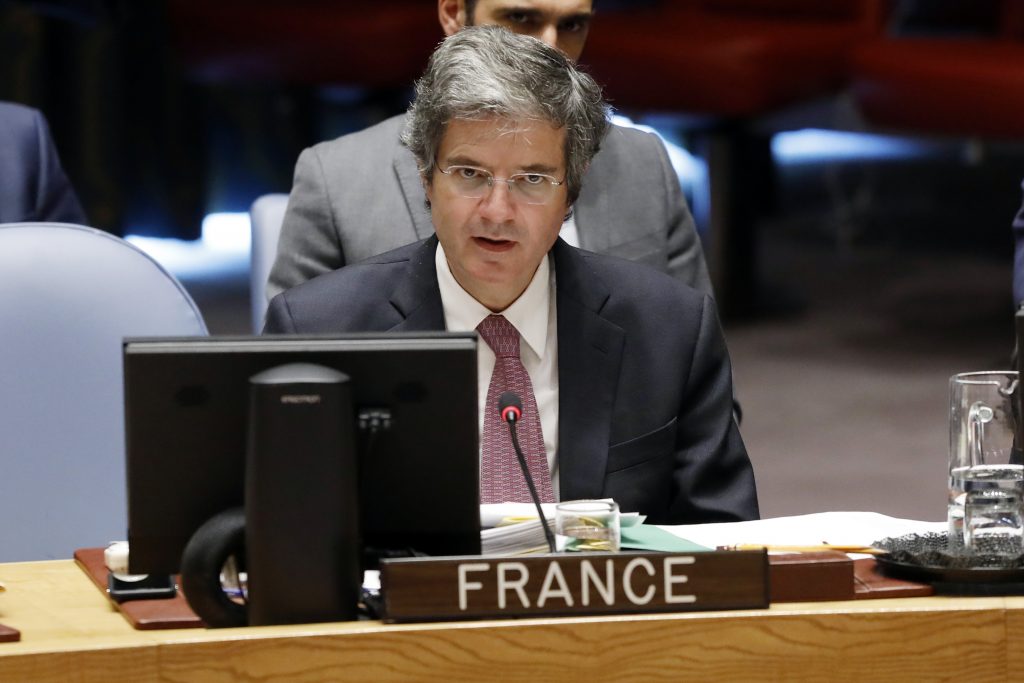 France’s U.N. ambassador is warning the Trump administration ahead of the release of its long-awaited Israeli-Palestinian peace plan that any attempt to sidestep a two-state solution and other internationally agreed upon criteria “will be doomed to failure.”

Francois Delattre said that 25 years after the Oslo Accords signed by Israel and the Palestine Liberation Organization started a peace process, “there might be a temptation to turn one’s back on the agreed framework.”

But he warned the U.N. Security Council that the temptation to pursue a unilateral path is fraught with dangers.

Declaring that he was offering advice to the United States “in a friendly spirit,” Delattre said, “A unilateral approach cannot lead to peace in the region” and “would stoke tensions to unsustainable levels.”

His comments to the Security Council on Tuesday reflected growing uneasiness in the international community about the U.S. approach to Middle East peace and its expected plan to end the decades-old Israeli-Palestinian conflict.

Strongly backing the French position, he said the United States can’t replace the efforts of European and Arab nations and the Quartet of Mideast mediators, which includes the U.S. but along with the United Nations, European Union and Russia.

Jared Kushner, the architect of the U.S. peace plan along with international negotiations envoy Jason Greenblatt, told Sky News in late February that the plan would address all “final status” issues, including borders, and require compromises by all sides.

But he made no mention of establishing a Palestinian state and said the plan would focus heavily on offering economic “opportunities” to the Palestinians.

Palestinian spokesman Saeb Erekat said at the time that a plan that doesn’t establish a Palestinian state “will not fly.”

France’s Delattre said his country’s objective is implementation of the two-state solution through negotiations on the basis of parameters agreed to by the international community.

He said these are: two states living side-by-side in peace and security, borders based on 1967 cease-fire lines with mutually agreed land swaps, Jerusalem as the future capital of the two states, and a just, fair and realistic solution for Palestinian refugees.

“These parameters are not optional, and they are not a menu from which you can pick and choose at will,” Delattre stressed. “These parameters represent a package. They are the bedrock of any peace plan and any negotiation, and they must be taken as a whole and not approached piecemeal.”

“Any peace plan in our view can only succeed if it is rooted in the internationally agreed parameters,” Delattre told reporters Wednesday. “It is true on every key issue, and for the situation in the Golan in particular.”