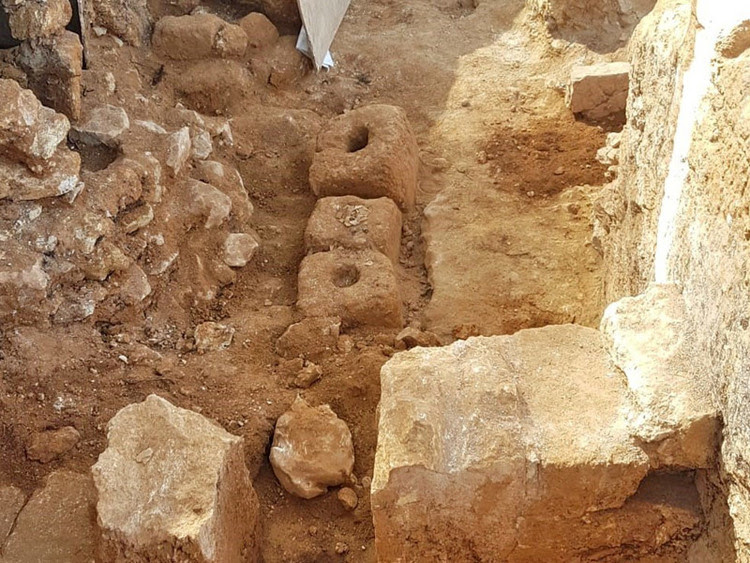 Impressive remains of a Jewish village from the Chashmona’im period, which archeologists believe are about 2,000 years old, are currently being uncovered in the Sharafat neighborhood of Yerushalayim.

The excavation, funded by the Moriah Jerusalem development corporation, on behalf of the municipality, has uncovered a large wine press containing fragments of many storage jars, a large columbarium cave (rock-cut dovecote), an olive press, a large mikveh, a water cistern, rock quarries and installations.

The most significant feature of the excavation is an extravagant burial estate, which included a corridor leading to a large courtyard chiseled into the bedrock. The courtyard had an encompassing bench, with the entrance to the burial cave from its façade. The cave included several chambers, each with oblong burial niches (Kochim) chiseled into the walls. In order to respect the buried parties, and in accordance with halachic restrictions on disturbing the burials, the cave was sealed.

The earth which covered the courtyard of the burial estate contained some large building stones, some of which are elaborate architectural elements common during the period of Bayis Sheni. Most interesting is a Doric capital of a heart-shaped pillar. A few cornice fragments were also found. Such quality craftsmanship of architectural elements is very rare.

The current excavation has so far shown only a small part of a larger village that existed to its south. However, the finds already seem to indicate that the village was of agricultural nature, and among other things produced wine and olive oil, as well as breeding doves. Doves were an important commodity during that period, as meat and eggs were consumed by the people and were also used for korbanos. The doves’ droppings were used as fertilizer for agriculture. Columbarium caves, designated installations used for breeding the doves, are a known feature in the Yerushalayim area.

The excavation is being conducted by the Israel Antiquities Authority in the Sharafat neighborhood of Yerushalayim, where an elementary school will be built.