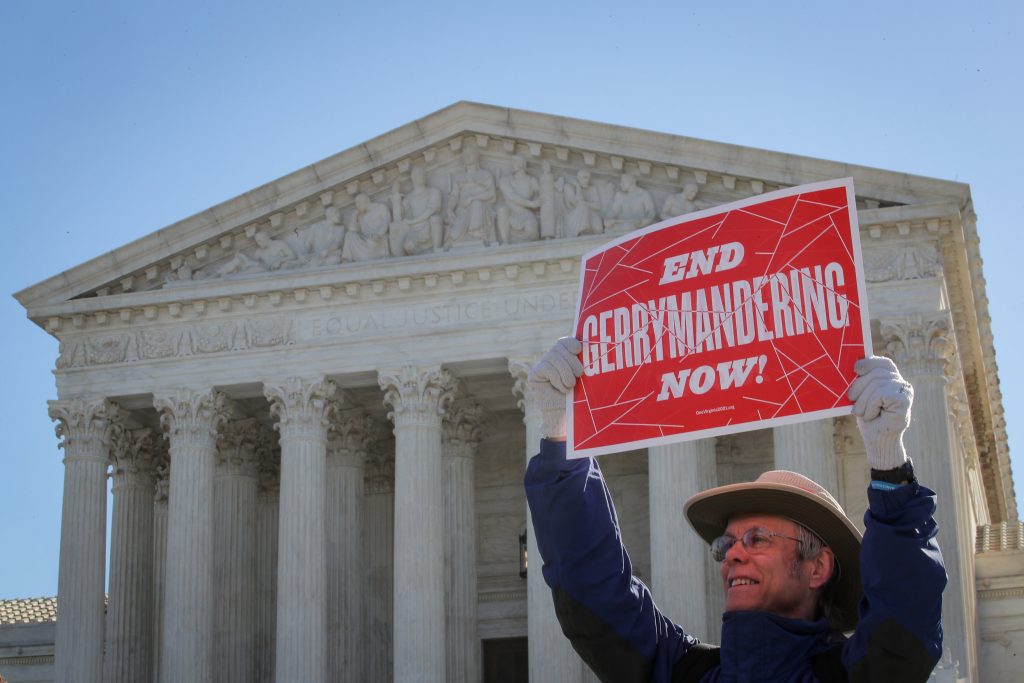 Before the Republican-led state legislature divided their city and even their college campus into two different districts in a bid to boost the party’s election chances, students like recent graduate Vashti Smith could vote for the Democratic U.S. congressional candidate and know that person could win.

Thanks to partisan gerrymandering — a practice the Supreme Court will examine on Tuesday in two cases that could impact American politics for decades — that is no longer the case. A U.S. House of Representatives district that once covered heavily Democratic Greensboro was reconfigured in 2016, with the voters in the city of 290,000 people inserted into two other districts spanning rural areas with reliable Republican majorities.

“We had one person representing us who shared our beliefs. Now we have two people who don’t really represent us,” said Smith, 24, a 2017 graduate who works with voting-rights group Common Cause, which is among the plaintiffs challenging the new districts.

After decades of electing Democrats to the state’s 12th U.S. House district by wide margins, Greensboro now has been represented by two Republicans, in the redrawn 6th and 13th district seats, since 2016.

Republicans and Democrats over the years have engaged in gerrymandering, manipulating electoral boundaries to entrench one party in power. Critics have said the practice has now become far more effective and insidious due to computer technology and precise voter data, warping democracy.

The reworked districts that helped President Donald Trump’s party gain House seats in North Carolina are part of the historic U.S. Supreme Court fight, along with a single Democratic-drawn House district in Maryland that resulted in a Republican seat flipping to a Democrat.

In separate lawsuits, federal courts in Greensboro and Baltimore last year sided with the challengers in North Carolina and Maryland, ruling that the contested districts violated the U.S. Constitution’s guarantee of equal protection under the law, the right to free speech and association, or constitutional provisions governing elections.

The Supreme Court’s ruling, due by the end of June, could profoundly impact American elections by either letting courts curb partisan gerrymandering or not allowing them to stop it.

‘THE SYSTEM WE HAVE’

Some Republicans and conservative advocacy groups have rallied behind the North Carolina legislators, arguing there is no constitutional right for a political party’s seat count to be proportional to its percentage of the statewide vote.

“That isn’t the system we have,” said Edward Greim, an attorney specializing in election law who filed a Supreme Court brief on behalf of a national Republican organization.

Centrist Republicans including former California Governor Arnold Schwarzenegger and current Maryland Governor Larry Hogan are gerrymandering critics, filing a brief to show how the practice “amplifies the voices of partisans and drowns out the voices of moderates.”

In creating the 2016 map, North Carolina’s Republican leaders were open about maintaining a House delegation of 10 Republicans, joking that they would have preferred to make it 11 Republicans if possible in the state’s 13 districts. “I think electing Republicans is better than electing Democrats,” state House Representative David Lewis said at the time.

For Smith, the new line dividing her campus along Laurel Street meant that each time she walked from her apartment to the library she entered a new district. It also meant, she said, that her vote was drowned out by her new district neighbors.

North Carolina A&T political science professor Derick Smith, whose window looks across the district line, said the boundaries were designed to disrupt a community known for its progressive politics, dating back even before the Greensboro sit-ins that were a key moment in the civil rights movement.

“They’re breaking up a community of common interest to create a partisan advantage for the party drawing the maps,” Smith said.

The Supreme Court last year failed to issue decisive rulings on partisan gerrymandering in cases from Wisconsin and Maryland.

Liberal and conservative justices alike have criticized gerrymandering as a form of partisan skullduggery. But for decades the Supreme Court has been uncertain about federal courts’ authority to curb this inherently political act.

North Carolina’s Republican legislators have said judges are not equipped to determine how much politics is too much in line-drawing. The plaintiffs said closing courthouse doors would embolden map-makers to be even more ruthlessly partisan.

Legislative districts across the country are redrawn to reflect population changes determined by the federal census each decade. In most states, redistricting is done by the party in power, though some assign the task to independent commissions in the interest of fairness.

Gerrymandering is carried out by cramming as many like-minded voters as possible into a small number of districts —called “packing” — and spreading the rest in other districts too thinly to form a majority — called “cracking.”

Greensboro has been at the center of several high-profile lawsuits since Republicans won control of the state legislature in 2010, ending nearly a century of Democratic-led redistricting that often riled Republicans.

Republicans adopted a new map in 2011 and won nine or 10 of the state’s 13 House seats in every election since, unreflective of an electorate closely divided between the two parties. Seats were more evenly distributed in the past. In 2010, Democrats captured seven seats to six for the Republicans.

Last year, even though Democrats won roughly half the statewide vote, they won only three of the 13 House seats. Officials ordered a new election for one seat after allegations of ballot fraud favoring the Republican candidate.

The North Carolina case focuses on a 2016 map adopted after a court found that Republican legislators unlawfully used race as a factor when redrawing certain U.S. House districts after the 2010 census.