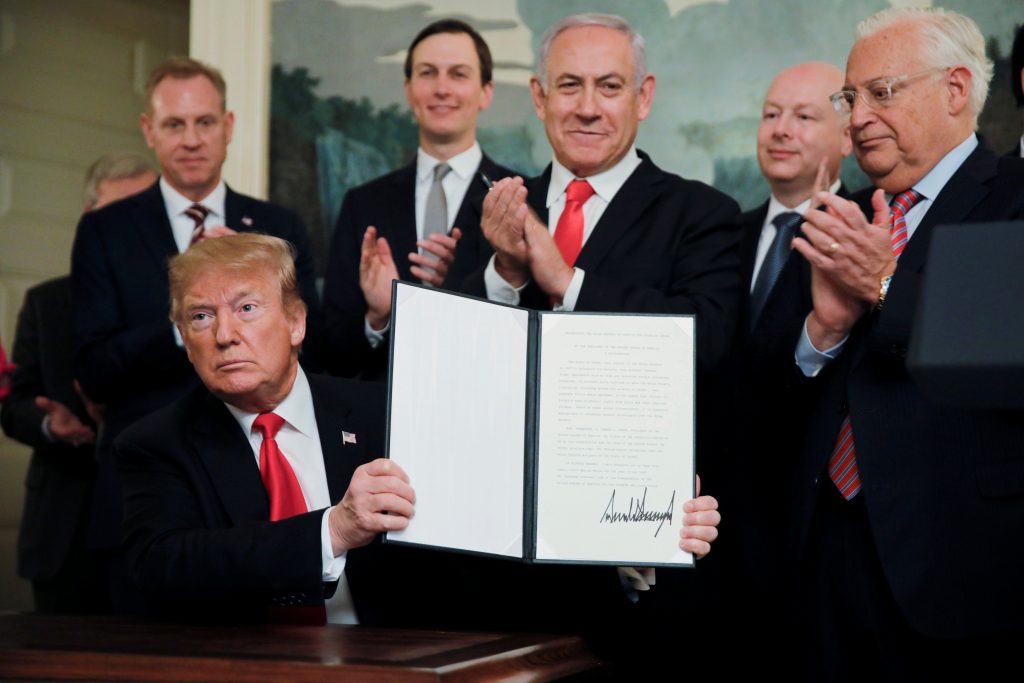 Prime Minister Binyamin Netanyahu expressed disappointment at what he called the “shortsighted lack of coverage” of President Donald Trump’s declaration that the United States officially recognized the Golan Heights as part of Israel. Calling the declaration “historic,” Netanyahu declared that Israelis would remember that the media practically ignored the story.

Trump signed the declaration Monday afternoon in Washington, saying that “it should have taken place many decades ago. At this moment the American Embassy stands proudly in Jerusalem, the capital the Jewish people have established. They wanted the embassy for many, many years, for many decades, and frankly, through many presidents. And we got it done. Israel is an inspiration, a trusted ally, and a cherished friend. The United States will always stand by its side,” the President said.

Netanyahu thanked Trump, saying that “Over the years, Israel has been blessed to have many friends who sat in the Oval Office. But Israel has never had a better friend than you. You showed this time and again.”

After the ceremony, Netanyahu headed for the airport, from where he flew back to Israel, cutting his American trip short in order to deal with the increased tensions in southern Israel.

Speaking to Israeli reporters before boarding the plane, Netanyahu said “I am returning to Israel now after a historic visit to Washington. The recognition by President Trump of Israeli sovereignty over the Golan will be remembered for decades. It took us fifty years to achieve this, and it actualizes an important principle in international diplomacy – if you start a war of aggression and you lose, you cede territory.

“The fact that you in the media covered this story for about a minute, is something that will come back to haunt you. In the historical context, this is a huge event,” Netanyahu said, adding that “I am hurrying back to Israel and I will go to the Defense Ministry as soon as I land. We are dealing with the security situation. We already gave a major response” to the missile attack on central Israel Monday. “Hamas needs to realize that we will not hesitate to enter Gaza or take any other step needed to ensure Israel’s security,” Netanyahu added.