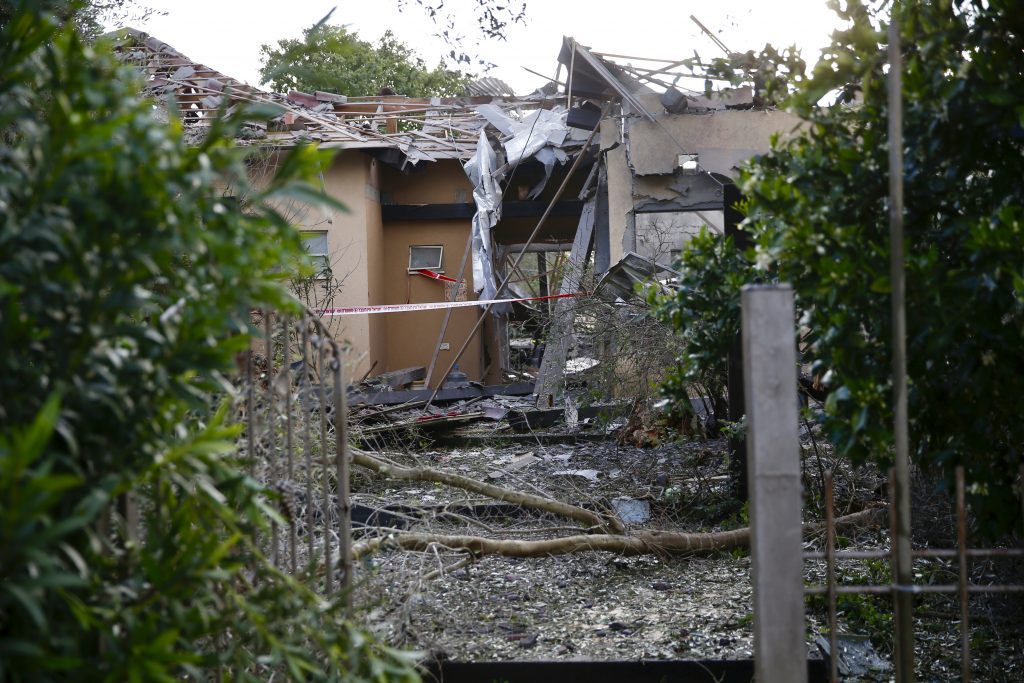 Prime Minister Binyamin Netanyahu said on Monday he will cut short his trip to the United States after a rocket attack in central Israel wounded seven people.

An Israeli Foreign Ministry spokesman said the projectile was fired from Gaza, and Netanyahu said Israel would respond forcefully.

Netanyahu, who arrived in Washington on Sunday for a four-day visit, said he would fly home immediately after meeting President Donald Trump at the White House, as planned, later on Monday.

The early morning attack on Mishmeret, an agricultural town north of Tel Aviv, came at a time of high tension ahead of the anniversary of Gaza border protests at the weekend, and Trump’s expression of support for Israeli sovereignty over the Golan Heights.

“In light of the security events I decided to cut short my visit to the U.S.,” Netanyahu said, calling the rocket fire a “heinous attack.”

In Mishmeret one house was completely destroyed, and at least one other house and cars were left badly damaged.

Magen David Adom said it was treating seven people, including an infant, a three-year-old boy, a 12-year-old girl and a 60-year-old woman who was suffering from blast injuries, burns and shrapnel wounds.

The strike came minutes after the IDF activated air raid sirens in the area and said one rocket had been launched out of the Gaza Strip, where Hamas and other factions possess such weapons.

Police sealed off streets, and emergency services were working at the scene, as Israeli politicians visited to talk to media crews.

There was no immediate claim of responsibility from Gaza, where Palestinians were preparing for Israeli retaliation.

Israel told Palestinian officials it was closing all Gaza crossings as well as access to the sea from the blockaded territory.

Netanyahu said his decision to return to Israel was made after he consulted with Israeli military and intelligence chiefs. He had been due to address AIPAC, the largest U.S. pro-Israel lobby, on Tuesday.

But early on Monday he said: “In a few hours, I will meet President Trump and immediately after that I will return to Israel to direct our actions close-hand.”

Two rockets were launched at Tel Aviv on March 14 but caused no injuries or damage. Israel blamed those rocket launches on Hamas, though a security official later said the salvo had been set off by accident.