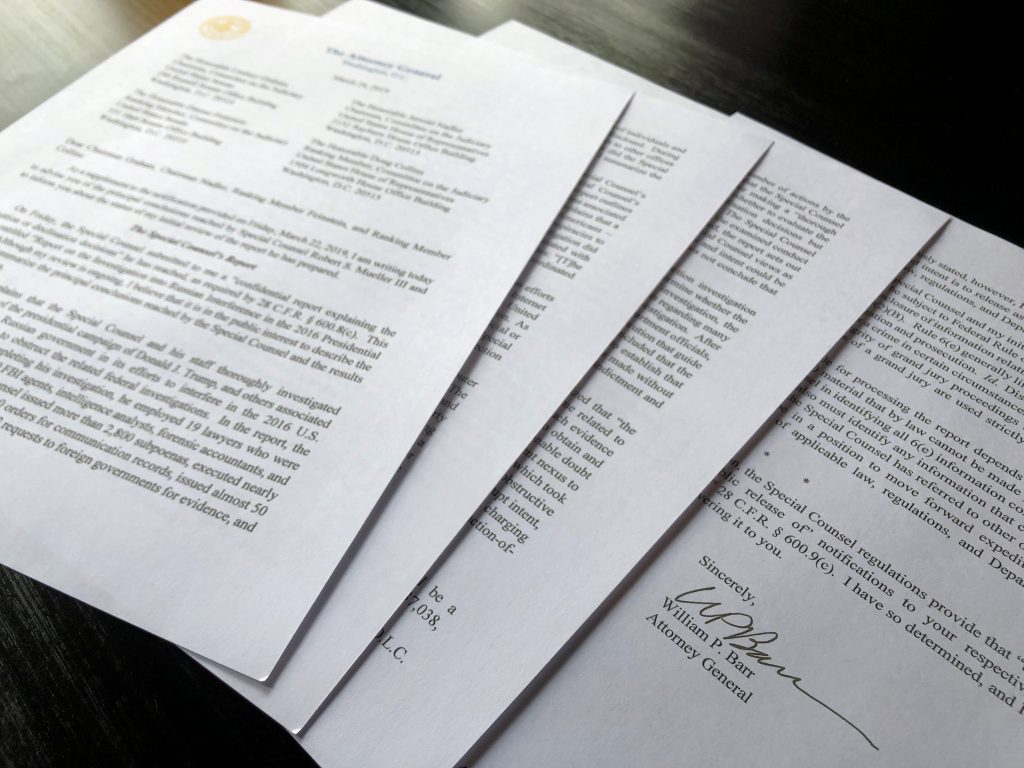 Special Counsel Robert Mueller’s conclusion that President Donald Trump’s campaign did not collude with Russia in the 2016 election is a serious blow to Democrats who had hoped Mueller’s report would boost their own wide-ranging probes into Trump’s business dealings.

Democrats promptly called for the release of Mueller’s full report and noted that he did not exonerate Trump on the question of whether the president obstructed justice in trying to undermine investigations into the election campaign.

Still, Attorney General William Barr’s summary of Mueller’s final report appeared to significantly reduce the risk of impeachment that had hovered over Trump almost since he took office on Jan. 20, 2017.

“It’s one of those hard realities that sometimes things don’t turn out the way you wanted them to,” said Democratic political consultant Colin Strother, who is based in Austin, Texas.

Even some high-level Democrats were talking not so much of ramping up investigations but the need to address bread-and-butter domestic issues. There is already a crowded field of Democratic presidential candidates hoping to deny Trump re-election next year.

Democrats won control of the House of Representatives in congressional elections last November and have used their power since January to launch blockbuster hearings in the powerful House Judiciary and House Oversight Committees.

Jerrold Nadler, the Judiciary Committee chair, put the White House on notice earlier this month when he said his panel was seeking documents from 81 individuals, government agencies and other entities for a broad probe into the 2016 campaign as well as corruption and obstruction of justice.

Those moves were part of an effort to lay the groundwork for possible impeachment proceedings against Trump – a move that has been undertaken only three other times in U.S. history.

All they needed was a stinging condemnation from Mueller of Trump’s behavior to give their probes liftoff.

Now, with Barr notifying Congress that Mueller found no evidence that Trump or anyone in his presidential campaign colluded with Russia’s meddling in the 2016 election, impeachment was seen as much less likely, barring new developments.

“It doesn’t look like there’s impeachment. Democratic leaders were already backing away from it,” said Elaine Kamarck, a senior fellow at the liberal-leaning Brookings Institution in Washington.

Kamarck was referring to House Speaker Nancy Pelosi, the top U.S. Democrat, who recently said in a Washington Post interview that the country should not go down the path of impeachment because Trump is “just not worth it.”

All through last year’s congressional election campaigns, Pelosi warned that any impeachment effort against Trump would fail unless Republicans joined Democrats in the effort.

That appears virtually impossible now that Republicans can point to Mueller finding no collusion and not recommending any definitive action on obstruction of justice on Trump’s part.

“Clearly for Democrats to propose pursuing impeachment when Mueller apparently did not find evidence of collusion and conspiracy between the Trump campaign and the Russians would be a mistake,” said Bruce Gyory, a Democratic political consultant based in Albany, New York.

Barr noted in his letter to Congress that Mueller said his report did not conclude Trump committed any crimes but “it also does not exonerate him.”

That did not stop Trump from claiming “complete and total exoneration.”

Still, senior Democrats were in no mood to accept total defeat. Nadler and other House committee chairmen said Barr should testify to Congress “without delay.”

Pelosi and Senate Democratic leader Chuck Schumer called on Barr to make Mueller’s report public, and gave their support to continuing the probes of Trump.

While Democrats’ congressional hearings are not likely to quietly fade away in coming days and weeks, there is now more risk attached to them.

“We’ll look as ridiculous as the Republicans did during the Obama administration if we continue down some path of calling for an impeachment when there is no cause,” Strother said.

If Mueller did not find any impeachable offenses, Strother advised, Democrats should “accept it and move on.”